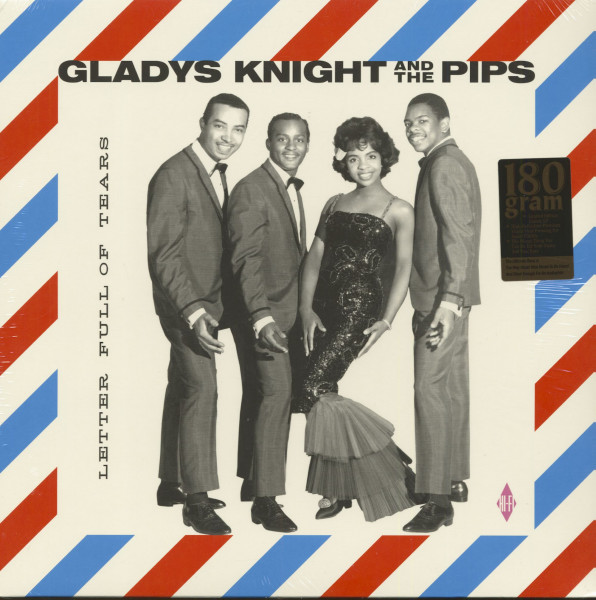 (Vinyl Lovers) 14 tracks - Re-isuue of the 1962 'Fury' LP album
Gladys Knight and The Pips was a gritty soul outfit fronted by Georgia native Gladys Knight and backed by her brother Merald 'Bubba' Knight. and cousins William Guest and Edward Patten. Gladys. known as the 'Empress of Soul-, is widely regarded as one of the greatest soul singers of all time. on par with such early pop & soul divas as Nancy Wilson and Diana Ross. Her expressive. powerful voice became the model for generations of singers, ranging from Jennifer Holiday to Alicia Keys. and her work with The Pips stands tall among the best soul music of the '60s. '70s and '80s. The group made the Top Ten in 1961 with the heavily doo wop-influenced 'Every Beat of My Heart- (a cover of a Hank Ballard & The Midnighters song for Vee-Jay records. which was penned by Johnny Otis). They also recorded a number of overlooked pop-soul sides for the Fury and Maxx labels in the early and mid-'60s. They were first produced by the great R&B tandem of Bobby Robinson and Marshall Sehorn. under the direction of arranger Horace Ott.

Gladys career took off when she was just seven years old! At that tender age she won Ted Mack's Original Amateur Hour television show contest in 1952. The following year. she. her brother Bubba, sister Brenda. and their cousins William and Eleanor Guest started 'The Pips' (named after another cousin, James 'Pip' Woods). Gladys' soulful, church-trained alto lead, accompanied by The Pips' warm harmony, helped the Atlanta teens crack the tour circuit without a record. and by 1957 they'd been on the road with Sam Cooke. B.B. King. and Jackie Wilson. In fact. Wilson arranged an introduction to his label, Brunswick Records, and the group ended up releasing one single for them. 'Whistle My Love.' in early 1958, that failed to chart. The Pips began to perform and tour, eventually replacing Brenda Knight and Eleanor Guest with cousins Langston George and Edward Patten in 1959.

The Pips scored their first hit in 1961. with the aforementioned 'Every Beat of My Heart.-The song became a number-one R&B and number-six pop hit. Shortly afterward. Langston George left the group. and the remaining members continued as a quartet billed as Gladys Knight & The Pips. Typically, most of the act's recordings featured Knight's contralto on lead vocals and the three male members of the group providing characteristic background vocals. After a second smash. 'Letter Full of Tears.' in 1962. Knight quit the group to start a family. The Pips toured on their own for two years. until Gladys Knight returned to the act in 1964 in order to support her two children. That year they had another modest hit with 'Giving Up.'

'Class, artistry and stage presence... Gladys Knight could talk to an audience and articulate what she wanted to say with just the right words.' - Berry Gordy

Gladys Knight & The Pips developed a reputation for exciting and polished live performances that enabled them to work steadily even without the benefit of best-selling records. Choreographer Cholly 'Pop- Atkins designed 'fast-stepping' dance routines that became a signature of The Pips' stage presentation. Despite their splendid beginnings, the group didn't hit their commercial stride until they moved to Motown in 1966.

This essential LP edition includes Gladys Knight & The Pips' underrated debut LP. Letter Full of Tears, which was originally issued in 1962 by the small Fury label, and has been long unavailable on vinyl. The album contains regional hits such as the title song (a reading of Don Covey's 'Letter Full of Tears'). the stomping 'Room in Your Heart,- and their first smash - a cover of Johnny Otis' 'Every Beat of My Heart.

In addition to the original masterpiece, this Vinyl Lovers collector's edition also includes 2 bonus tracks, consisting of hard-to-find sides issued by the Fury label during the same period: 'Come See About Me.' and 'I Want that Kind of Love.' Although Gladys Knight & The Pips eventually went on to greater commercial success in the mid- and late '60s. all of these wonderful songs form the building blocks of their musical legacy. This long play is truly an oldie goldie treasure. as well as an indispensable set for any aficionado of early soul.
Gary Blailock

Original liner notes: Greater than the power and wealth of a king; to have a heart. And let it sing!
With this crude quatrain, I think, one can aesthetically and/or metaphorically enter into an appraisal of one of America's great new singing groups and, an understanding of its meteoric rise to stardom. But it, alone, is not enough! Even the English language — colorful and rhetorically omnipotent — would prove fragile and superfluous, if one would attempt to truly appraise or describe the very intimate and very great artistry of this group. The attempt, however, is mandatory and, having no other media, presently, the latter must suffice.

This is GLADYS KNIGHT AND THE PIPS' first long-play recording. But it is no ordinary album, produced and valuable only for its intrinsic beauty and entertainment quotients. And, it is more than just a full-scaled, self-portrait (in vinyl, if you wish) of a group of artists on the ascendant and then, because of the powerful impact made in nightclubs and through records, is assured of a future brilliantly sanguine. There is reason here, as the performances herein will attest: GLADYS AND THE PIPS are no ordinary 'run-of-the-mill' artists.

Gladys', the lead vocalist and story-teller, approach to a performance can be summed up and expressed in a sentence. She sets the mood by living and breathing the material and then sets the mood to music ... ably assisted by the Pips.

As Fury Records' president, Bobby Robinson, put it, 'Gladys has that special attribute and /or knack, so ram even among the so-called great singers, of being able to personalize the material she sings. And, she does it with a pulsating force and convin-cingly well. She has a way of igniting a song; she literally 'sets it a-fire'. And the wind of her giant personality feeds it until it becomes a blazing performance!' That special ability, and God created only one Gladys, to catch and hold the listeners attention, to penetrate deep into the emotions and project largeness and vividness of presence (whether on stage or on record) is a notable achievement that only a few of the 'greats' can ever hope to emulate.

Gladys' artistry is indeed a rare commodity. Her versatility, passionate effervescence, clarity of diction, her very personal individuality, resilient control of dynamics and her very intelligent comprehension of the lyrics, these... and oh, yes, SOUL! each on each and together make Gladys a genuinely great artist.

he word SOUL, musically speaking, has been so perverted during the last few years that it has become increasingly difficult to arrive at a formidable definition. Eddie Castleberry, noted radio personality, defines it in this manner: 'SOUL, from where I sit, is the essence or heart of singing . and it comes from the heart'. Gladys is abundantly fortunate and wealthy in this respect ... she just opens up her heart and lets it sing! And sing it does!

Gladys was born 18-years ago in Atlanta, Georgia. And she, like many others started her career early, by singing in churches around her home. I, personally, feel that the sometimes ecstatic and serious understones of this music form greatly influenced and is perhaps, the underlying factor that has made her a gem among the great vocalists.

The PIPS, who provide the myriad and very wonderful backdrops for Gladys' performances, have a similar background. Each member is a stellar performer in his own right and, as Gladys admits: 'They are simply great! Wonderful! They are my inspira-tion', she entoned during a recent interview. 'They encourage me, keep me happy when the going gets rough. They are respon-sible, to no small degree, for the progress I have made and for what I am today. They provide that special fuel that keeps the fire of ambition burning in my heart... and so keeps me singing. I love them, and I think they love me. We are a very happy group.'

Here, then is GLADYS KNIGHT AND THE PIPS. I know you will agree with me, that this is a magnificent showcase, varie-gated and illustrative of the group's great artistry and capacity.4 know, too, that after you have listened to the bands of this Long Play recording, you will remember Gladys and the Pips for a long time to come.

So, without further ado, here they are! ! GLADYS AND THE PIPS for your listening pleasure. Included in this album are the group's first big hit recording, “Every Beat of My Heart'. We had to include it. In addition, you will find their subsequent hits, 'Guess Who', 'Letter Full of Tears' (the title tune of this album) and 'Operator'. The rest of the material is new, some having not been previously recorded by any artist. Sonny Woods

After giving Motown its first national hit with his pounding Money (That's What I Want) in 1960, Barrett Strong took a hiatus from Hitsville, working as a songwriter in Chicago. That's where he found the inspiration for one of Motown's greatest hits.

"I was walking down Michigan Avenue, and the idea just popped into my mind. I heard people say it all the time: 'I heard it through the grapevine.' Nobody wrote a song about it, so I sat at a piano and came up with the bass line. And the melody came back," says Barrett, who rejoined Motown in 1966 and got together with producer Norman Whitfield. "Norman said, 'What do you have, man?' I showed it to him. He said, 'I'll cut that!'"  It was the auspicious beginning of a most fruitful partnership.

Whitfield produced a version of Grapevine by The Miracles that sat on the shelf. His ominous minor-key production of the song by Marvin Gaye initially met the same unjust fate. Undaunted, Norman next turned to Gladys Knight & The Pips. The veteran Atlanta vocal group—Gladys (born there on May 28, 1944), her older brother Merald 'Bubba' Knight, and their cousins William Guest and Edward Patten had scored a #1 R&B smash with Every Beat Of My Heart for Vee-Jay in direct competition with their own remake on Fury, then posted another hit for Fury at year's end with Letter Full Of Tears. They landed at Motown in 1966 against Gladys' better judgment.

"I said, 'I don't want to go over there. We've been fine up to now, creating our own avenues, our own following,'" says Gladys, who was outvoted three-to-one. The hits began to come on Motown's Soul logo in '67 with the Whitfield-helmed Everybody Needs Love. Then Norman handed the group Grapevine, now arranged as a raveup gospel workout mirroring Aretha Franklin's Respect.

"We took the track home, man. We would rehearse that thing night and day, in the morning and at night," says Bubba. "(Norman) said, 'How y'all comin' with that song I gave you, "Grapevine?"' And we went over to the studio one day at Motown and we sung it for him. We put the tape recorder on and we sung what we had on there. And he said, 'Good God! Get me a studio right now!'" Gladys' incendiary lead and The Pips' impeccably harmonized replies were surrounded by a complex intro played by two drummers and Hank Cosby's wailing sax solo. Grapevine was a #1 R&B/#2 pop smash for Gladys and the Pips, yet Gaye's version would do even better only a year later.