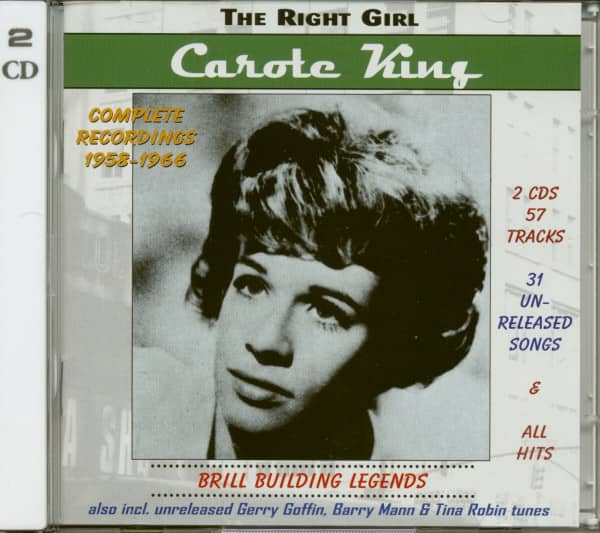 (1995/Brill Tone) Original Brill Building recordings - 57 tracks (31 unreleased) with 12 page booklet.
-
Gerry Goffin and Carole King are always and rightfully described as the most popular and prolific songwriters of their era, the early Sixties. It was a golden age for minority sounds: the music of soulful, urban or black vocal groups, the best of whom Were perhaps the Shirelles and the Drifters, given material by writers and producers who were young, gifted and Jewish. Gerry Goffin was born in Queens, New York,
on 11 February 1930. Although he started writing lyrics over his own one-dimensional melodies when he was eight, he became a qualified chemist before making a career of songwriting many years later.
Carole King, née Klein, was born in Brooklyn on 9 February 1941. She started piano lessons at four, tutored by her school-teacher mother. Outgoing and determined, she had formed her own group, the CoSines, by the age of 14 and danced in the aisles at the Alan Freed rock'n'roll shows. By her mid-teens King was signed to ABC-Paramount Records. She then teamed up with Paul Simon to make demo records of other writers' songs for Frankie Avalon, the Passions and the Fleetwoods. It was not a stunning beginning. At Queens College, however, the quiet lyricist who wrote terrible music crossed paths with the chirpy composer who wrote bad lyrics. Their musical collaboration grew into something more, and they married in 1958. It was Neil Sedaka who opened the door for Goffin and King to join Don Kirshner's songwriting team at Aldon Music. By the end of 1960 they had written numerous songs but had met with little success. The news that producers Leiber and Stoller were looking for a follow-up single to the Drifters' "Save The Last Dance For Me" changed all that. Goffin and King took demo singer Tony Orlando into the studio and cut four songs, including "Some Kind Of Wonderful" (which the Drifters actually used) and Will You Love Me Tomorrow". Arranged by Carole King and sung by the Shirelles, "Will You Love Me Tomorrow" gave the team their first and biggest hit song. It became a US Number 1 in early 1961 and reached Number 3 in the UK.

Learn more about Carole King
Carole King Gerry Coffin and Carole King (then his wife) were the most versatile and... more
Close menu
"Carole King"

Gerry Coffin and Carole King (then his wife) were the most versatile and successful songwriting team in America during the early Sixties. Goffin was chiefly a lyricist : his flair and directness is illustrated on everything from their first big hit `Will You Love Me Tomorrow' by the Shirelles, to songs such as `Goin' Back', written shortly before the team split.

Most of their success was under the Nevins-Kirschner ­Colgems umbrella, where they worked at the Brill Building 1819 Broadway, NY 10022) together with several other con­temporary writers. After their divorce, Goffin's career wavered. A couple of unsuccessful solo albums and only the odd hit (such as Gladys Knight's 'Imagination', penned with Barry Goldberg) indicated that his vast talent remained. 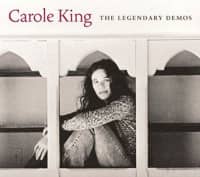 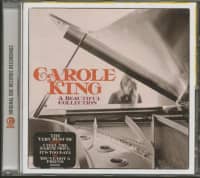