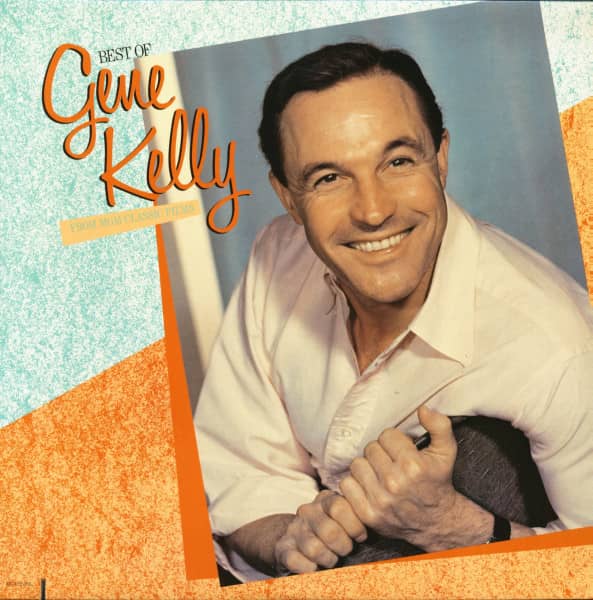 These performances are magical. Gene Kelly recorded the songs while a star at MGM Studios and therein managed to capture the sheer essence of film musical entertainment.
In fact, Eugene Curran Kelly made the most indelible impressions of his career while under contract to Metro from 1941 until 1957, the hey day of the Holly-wood musical. Working with Fred Astaire, Arthur Reed, Vincente Minnelli, Judy Garland, and many other talented artists and directors, Kelly was at the hub of a tremendously creative and successful studio. Red Astaire said of Gene Kelly: "A man of multiple talents — dancer, singer, actor, director, producer —completely absorbed when at his work: Kelly's suc-cess was in part due to this versatility — it even won him a special Oscar in 1952. Here was the rare combi-nation of a song and dance man who could act.
John Martin of the New York Times once wrote: "(Kelly) can character-ize his routines and turn them into an integral element of an imaginative whole: Two of the most famous examples of this are the pied piper-ish theme for "I Got Rhythm" and the cloudburst staging of "Singin' In The Rain': In spite of his intense personal artistic absorption, team-work was also one of Gene Kelly's major strengths. His first film, For Me And My Gal, coupled him with Judy Garland. It was an education for new-comer Kelly, working with the by-then 6-year veteran. Kelly said: "I was amazed at her skill; she knew every mark and every move. All I could do for her then was to help with the dancing: He did a bit more than that, and the film was nominated for an Oscar, with the title track becoming a top 5 hit. Kelly said: "Success in the movies is like suddenly being turned into a rocket',' and by 1951 he reached the apex of that flight.
That year, An American In Paris won 7 Oscars, including "Best Picture"; Kelly was the star and the choreographer. It also featured Rench film star Georges Guetary, and the two per-formed "S' Wonderful': one of the great filmic tributes to Rench joie de vivre. Kelly's performance eventually contributed to his induction into the Chevalier of the Legion of Honor by the Rench government. Kelly's exuberance, another factor in his success, is in all of these songs. It elevates the upbeat "Les Girls" and is basic to the wistful "Heather On The Hill: These songs bear out the crux of Gene Kelly's bril-liance as a versatile, consistent performer who man-aged to create lasting, timeless images you can't help but "see" even as you listen to these recordings. I guess that's real magic in these songs.
Bill Birrell