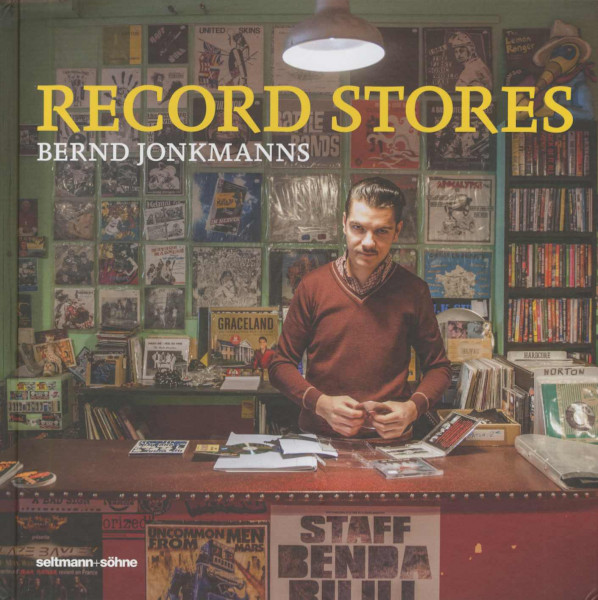 TRUE STORIES
FOREWORD BY CHRISTOPH DALLACH
Aclassic -the story of a manwho went into every record store with a ruler - he collected only Bob Dylan records, but exclusively those with a center hole deviating from the norm. Another amusing one is of a store where the two owners got into such a huge fight that they split the tiny music store right down the middle. Bach then ran their half separately - albeit with an identical selection of albums. And then there is the record store where a particularly energetic punk album is played right before closing time in an attempt to shoo out the last customers. There are probably as many legends about record stores as there are tales from the zoos Arabian Nights, with the one difference being that most record shop stories are based on reality. Record stores are not just shops where is is exchanged for goods, but rather bioropes where a passion for music is celebrated. You have to imagine record stores in this digitalized age as being small, impenetrable fortresses that exist in a state of constant distress, just like the Gallic village in the Asterix stories.

The Brit Nick Hornby immortalized the legend of the recordshop stunningly well in his novel High Fidelity. And yet, record stores in real life are rarely as exciting as those in this memorable book; on the contrary, many of these shops don't make it very easy on their visitors at all. Often times record stores are chaotic, dusty, dark, jam-packed rooms that smell quite musty, run by employees who live their lives sheltered from reality. Those who do not frequent record stores might quickly feel a bit out of place in them. The Rough Trade shop in London, Notting Hill, is a record store right out of a fairy tale - small, organized chaotically, piled high with recordings. This independent store opened in 1976 and was always more than just a store for recordings; at Rough Trade you could simply post a note on the wall if you wanted to start a band, bring in independently-produced debut singles if your career was starting to take off, and negotiate record deals in the back room if you had caught the eye of a label. And of course it was an oasis where you could just hang out and soak up the extravagant sounds that would most certainly be wafting throughout the store at any given time. But most importantly, it was always clear that it was all about more than just selling music there.
Rough Trade is so wonderfully rich in history and stories, more so than probably any other store. Most record stores are hard to spot; you will most likely find them located off the beaten path, on side streets, or on the outskirts of town. One such shop can be found directly on the highway exit ramp in Las Vegas, for example, while stores in Rio de Janeiro or Tokyo are hidden in high-rise apartment buildings. In Oslo, an old collector set up what is basically a second apartment in a back courtyard near downtown where he works on downsizing his collection while chatting with visitors, offering them cof fee out of a Thermos bottle. In Stockholm, however, you will find one small record store after another in a street downtown called St. Eriksgatan with a majority of these shops specializing in classical, metal, and jazz. However, while there are increasingly fewer record stores, the bond of customers to their retailer of choice has intensified. A prime example for this is the small Hamburg shop Michelle Records, a shop that has been distributing their recordings to the masses out of a quiet corner in downtown Hamburg since 1977.

Michelle is the kind of store where the owners warn you about buying records thatdisappointedthem, where musicians peakyour interest as they perform regularly in the small front window, and where the New Year is rung in with cold drinks and baked goods. Michelle co-manager Christof Jesse n once described the relationship with regulars as such: We recognize most Customers when they walk in. Many come again and again. We know the names of those who have been coming here over a longer period of time, know what they do, or know even if they maybe recently lost their job or are dealing with other problems in life. It is very common for a regular to come here to vent because he just got fired, promising to come back again when he has a new job. People also talk to us about personal crises, illnesses, and even deaths. I think this is great - it shows that we have created a semicommercial atmosphere. Of course we sell goods, but most of the time a lot more happens here than only that. We have accompanied some regulars throughout their whole lives, even to the grave. In that the same spirit, children are also brought in to see us. The whole spectrum of lifer Now, if you take a sober look at the matter, it is completely and utterly irrational to invest your money in records these days. Every new release as well