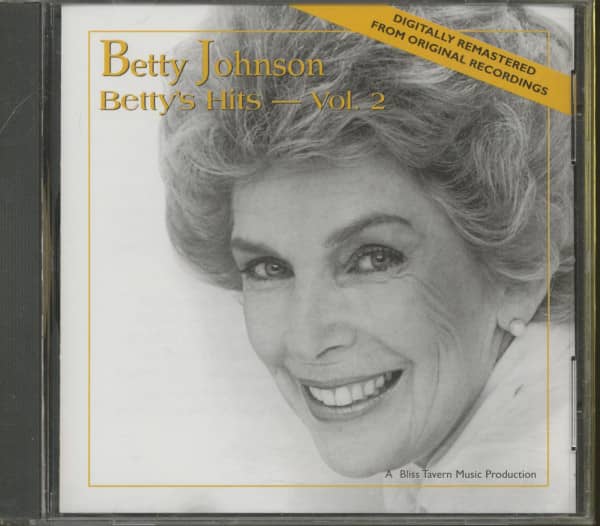 Betty Johnson is a music business survivor. It was a tossup whether to include her among The Hillbillies part of this collection (BCD 17350; 17406) or here. She has impressive credentials for both categories. Born in North Carolina in 1929, Betty began her music business career singing traditional country music while touring with her family. Her brother Kenneth, later to become an ordained minister, documented the hard-scrabble life of the Johnson Family Singers, as their itinerant father / preacher took his family on the road literally to sing for their supper. A surprisingly rich legacy of the Johnson Family Singers recordings from the 1930s – ‘50s remains available.

Betty's career made an abrupt turn after she became the regular 'girl singer' on Don McNeill's Breakfast Club, an early 1950s American radio institution, followed by regular appearances between 1957-1962 on the Tonight TV show hosted by Jack Paar (Johnny Carson's predecessor). All in all, Betty's pop stylings were heard in millions of American homes. A wealth of biographical and musical detail can be found on her website www.betty-johnson.com.

When the rock 'n' roll tornado blew through town, it made sense for Betty to take a shot at it. Plainly, she wasn't going to record Fujiyama Mama, but rock 'n' roll had its ballad side too, and sometimes they remade oldies. Those were niches where Betty could fit in. The emotional I'll Wait appeared as the premier release on the Chicago-based Bally label in early 1956.

"I didn't have much to say about the material I recorded back then," recalls Betty, who still performs today. "I'll Wait' wasn't really my style but it was the flavor of the month so we did it."

Bally Records, by the way, was a short-lived attempt by the company to expand from the jukebox and pinball machine business into recorded music. The attempt proved futile and after two years and 47 releases Bally was back catering to pinball wizards.

I'll Wait, which received some attention in the northeast, including spins by WINS DJ Alan Freed, made it to the bottom reaches (#94) of the 'Billboard' chart before disappearing. But Betty (and Bally) weren't through, as Volume 4 of 'They Tried To Rock: The Popsters'reveals.