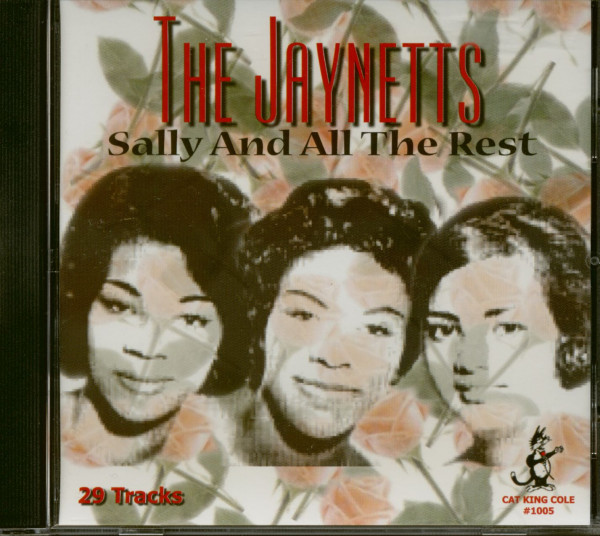 The Jaynetts: Sally And The Rest (CD)

Sally, Go 'Round The Roses

Bronx-based label owner/producer Zell Sanders had an interesting mix-and-match philosophy regarding her stable of female groups. So many girls were short-term members of The Hearts, the New Yorkers whose groundbreaking hit Lonely Nights is on our 1955 volume in this series, that discerning precisely who was on which recordings can be a challenge.

Sanders first rolled out the name of The Jaynetts in '58 for a single on her J&S label that actually featured an incarnation of The Hearts led by Baby Washington. She promptly mothballed it for half a decade. The Jaynetts returned from oblivion in 1963, this time populated by Lezli Valentine (who reportedly had dreamed up the group's handle by combining the 'J' in J&S with a piece of her middle name, Anetta), Louise Harris Murray (an original Heart), and Marie Hood. Murray's website also mentions Selena Healey as participating.

Rather than handle the behind-the-board action herself, Sanders recruited New York producer Abner Spector for the task. He and his Chess-distributed Tuff label were on a roll thanks to The Corsairs' '62 hit Smoky Places. Abner and his wife, Lona Stevens, are credited with penning Sally, Go 'Round The Roses. Artie Butler's hypnotic arrangement is spiced by haunting echo-laden vocal overdubs (it's been reported that several other singers were involved as well). The strategy worked beautifully, Sally rising to #2 pop and #4 R&B in late summer/early autumn of '63. Its instrumental backing track flip was inventively subtitled 'Sing Along Without The Jaynetts.'

The Jaynetts had several Tuff encores - Keep An Eye On Her; Snowman, Snowman, Sweet Potato Nose; There's No Love At All- but they were fated to be a one-hit group. J&S 45s credited to them starting in 1965 featured Zell's daughter, Johnnie Louise Richardson (formerly half of Johnnie & Joe, whose Over The Mountain; Across The Seawas a '57 smash) and a different cast. Lezli went on to a solo career at All Platinum Records, waxing the original Love On A Two Way Street in 1968 prior to The Moments' '70 hit version. Louise is still performing in New York City with her current incarnation of The Hearts and without to this day.

Review 0
Read, write and discuss reviews...more
Close menu
Customer evaluation for "Sally And The Rest (CD)"
Write an evaluation
Evaluations will be activated after verification.
Weitere Artikel von The Jaynetts
The Jaynetts: The Very Best Of The Jaynetts (CD) Art-Nr.: CDCOL0999