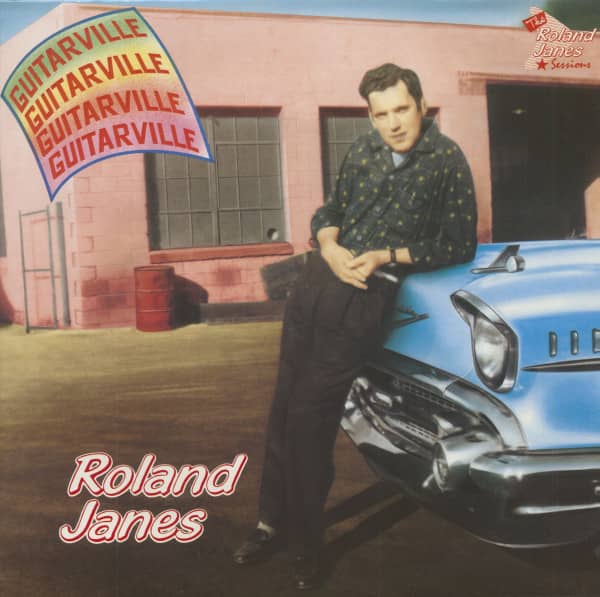 This article is deleted and can no longer be ordered!
Please inform me as soon as the product is available again.
P Secure bonuspoints now
Description Review 0
Description
(Bear Family Records) 15 tracks - very rare LP Roland Janes has been a shadowy figure, not... more
Close menu

(Bear Family Records) 15 tracks - very rare LP
Roland Janes has been a shadowy figure, not least because his gifts as a producer, engineer and supremely adaptable studio musician outrank his gift for self promotion. Virtually anyone who knows anything about '50s rock music knows the solo that Roland con-ceived, executed and forgot in less than a minute on Whole Lotta Shakin' Goin' On. Almost as many know the delightful little solo he took in the middle of Raunchy and the interplay with Jerry Lee Lewis on High School Confidential. And then there was his pre-psychedelic intro to Billy Riley's Flying Saucer Rock & Roll which a multitude of garage bands have sought to emulate. Roland also played on Harold Dorman's 1960 smash MountainOf Lave, recorded for a label that he co-owned. As a producer, Roland was responsible for Travis Wammack's Scratchy, Matt Lucas's I'm Moving On and Jerry Jaye's Hello Josephine, which were among the best records to emerge from Memphis in the transitional period of the early '60s. Roland was born on August 20, 1933, the second youngest in a family of seven. His family lived in north east Arkansas where his father was a lumberman whose work kept the family on the move during the Depression. When Roland was ten, his parents divorced and his mother moved to St. Louis, eventually bringing her children with her. Roland's father was an amateur picker and his cousins, Lloyd and Lonnie Snider, worked in a semi pro band in Corning, Arkansas. Roland's rust instrument was the mandolin al-though he had taken up the guitar by the time he enlisted in the Marines in 1953. He had also moved to Memphis shortly before he entered the service and he returned there after his discharge in 1956. He went to school under the GI Bill and worked briefly as a laundryman and even more briefly in a paint factory before finding his niche in music. Shortly after returning to Memphis, Roland saw a want ad placed in the local paper by Doc McQueen, a pianist who ran a small demo studio from his home. He was looking for a picker.

Through Mc-Queen, Roland met steel guitarist Kenneth Herman who in turn in-troduced him to Jack Clement. At that time, Clement and a local truckdriver, Slim Wallace, were on the point of launching the Femwood studio and label from Wallace's garage. Their first artist was to be Billy Riley, also from north east Arkansas, who was working up Trouble Bound and Think Before You Go for the debut Femwood single. Clement took the two cuts to Sam Phillips at Sun for mastering. Phillips liked what he heard and Riley's first efforts were parlayed into an engineering job at Sun for Clement, a con-tract for Riley and steady work for his backing group as session-men.

Riley's group soon became one of the hottest working bands in the Mid South. In late 1956 they were looking for material for their second Sun single and Roland remembered some demos he had heard by a local musician, Ray Scott. One of them was a novelty i number called Flying Saucer Rock & Roll. Phillips thought it might click and the group worked up an arrangement featuring Roland's piercing intro, Riley's rasping vocal and a thunderous rhythm track led by Jerry Lee Lewis. It stands as a working defini-tion of rockabilly music; much emulated - rarely bettered. The song also gave Phillips the impetus to name Riley's group the Lit-tle Green Men. IRoland and the Green Men's underage drummer, J.M. Van Eaton, played on Jerry Lee Lewis's first sessions. In 1957 Roland quit Riley to work on the road with Lewis. A subsequent dispute with Lewis led to a short spell with Bill Justis, riding the crest of the wave that began and ended with Raunchy. Roland then returned to work with Lewis shortly before the singer embarked on his ill-fated tour of England in May 1958.

They continued to work together until 1959 when Roland returned to Riley's group. By that point he had begun to question whether he wanted to spend thereat of his days playing on the road and in the studio. He and Riley came up with an idea that would enable them to move into produc-tion. "When Sam (Phillips) put in the new studio on Madison Avenue," recalled Roland, "Bill and I went to Sam and asked him to let us retain the old studio and record there with the product going to Sun. However, we never actually resolved the question and just drifted into doing our own thing." By that point Roland and Riley had already made one or two ges-tures in that direction. They leased an instrumental version of Fireball Mail to Jarofrop Rank via Bill Justis. it had been recorded under the pseudonym of the Spitfires to sidestep Riley's contrac-tual obligation to Sun. Before that, Roland had cut an instrumental single that coupled Patriotic Guitar with the menacing Guitarville.

The single was originally conceived at Sun during the time that Roland was working for Jerry Lee Lewis. By this point, Jud Phil-lips had resurfaced to take over Lewis's management after the fias-co in England and he went on to form his own Judd label after a falling-out with Sam. There was some ill feeling between Sam and Roland over the single because it had originally been cut at Sun and Sam had refused to free up the tape. However, the record was...