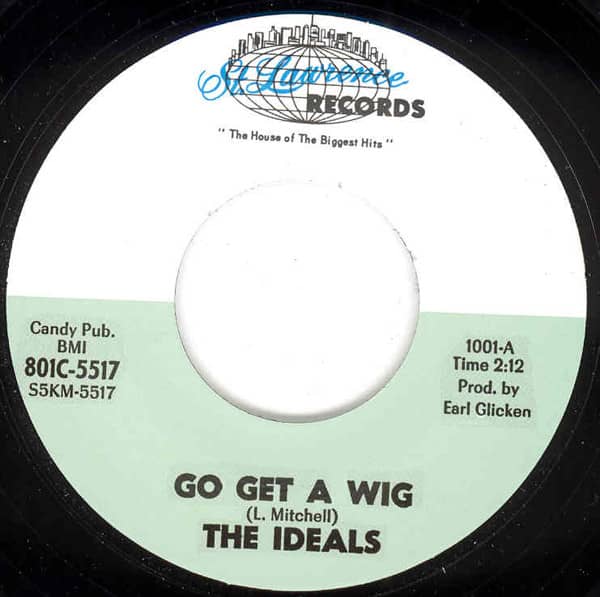 This article is deleted and can no longer be ordered!
Please inform me as soon as the product is available again.
P Secure bonuspoints now
Description
Learn more about Ideals
Review 0
Description
Nice R&B/Soul crossover mover! more
Close menu

Chicago sired more than its share of imaginative dance numbers, few as gloriously raw as The Gorilla. It was the work of The Ideals, who had been around since 1952, when they were barely in their teens (all but Spraggins attended Crane High School). At their inception, they were lead Frank Cowan, tenors Leonard Mitchell and Wes Spraggins, baritone Robert Tharp, and bass Clifford Clayborn, though he was soon replaced by Sam Steward while Reggie Jackson supplanted Cowan. A sign promoting the Ideal Metal Company gave them their name.

Largely because of a lack of originals, The Ideals waited a long time to record (a 1961 Ideals single on Checker wasn't them). Fred Pettis came in as lead singer around 1956 and left a couple of years later. Future soul star Major Lance briefly floated through. Jackson returned from the military to rejoin Mitchell, Tharp, and Steward. The Ideals made their 1961 vinyl debut on deejay Richard Stamz's Paso label with Together b/w What's The Matter With You Sam and encored with a haunting Magic b/w Teens. By the time they made it back into a recording studio in '63, they'd acquired new lead singer Eddie Williams.

Howard Pitman, a former member of The Five Chances (they recorded for Chance and Blue Lake in the mid-'50s), started his own Concord label and came up with The Gorilla along with lead singer Williams and Jerry Murray. Eddie's snarling lead and The Ideals' chants were abetted by a saxist determinedly playing in the wrong key. With deejay Herb Kent behind it, The Gorilla sold so well locally after its September '63 release that Pitman handed it to Bill Erman's Cortland label. With the Donald Jenkins-penned ballad Don Juan on the flip, The Gorilla made a lot of Chi-Town noise. None of their Cortland followups, notably a remake of Henry Lumpkin's Mojo Hanna and the fake live sequel Mo Gorilla, went anywhere.

The Ideals moved to the St. Lawrence label in 1965 for the R&B sizzler Go Get A Wig. They were down to just Jackson, Mitchell, and Stewart when they ventured in a Windy City soul direction for I Got Lucky (When I Found You) and then You Lost And I Won, the latter on St. Lawrence's Satellite imprint. Meanwhile, Tharp joined with Murray to form the duo Tom and Jerrio, posting a '65 hit with their Boo-Ga-Loo for ABC-Paramount. The Ideals would finally dent the R&B charts with Kissin', their second soul-soaked outing on Satellite, in early 1966. A smoother remake of Go Go Gorilla closed out their Satellite stay, and a '67 outing for Boo-Ga-Loo, The Mighty Lover, completed The Ideals' recording career.