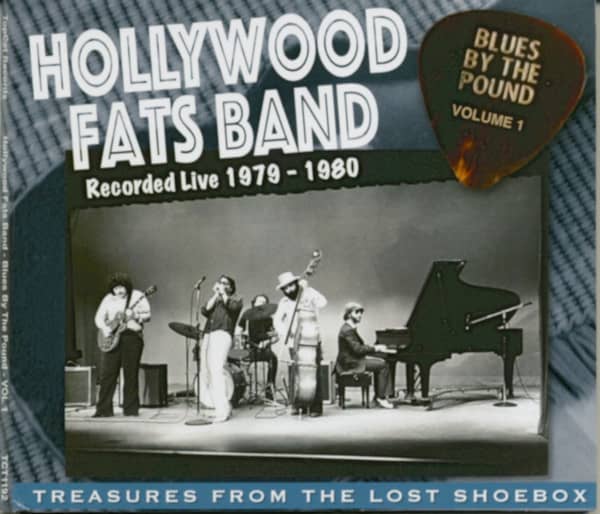 In cooperation with two original members, the Texan Topcat label is now releasing a small series of unknown amateur live recordings, recorded in 1979/80 in Palo Alto, Laguna Beach and Santa Ana near L.A.. Far from satisfying the demands of hi-fi enthusiasts, these numbers - West Coast Blues, Jump Blues and Blues classics - inspire the desire to be at least at one of these concerts. We are left impressed by the intensity with which Fats himself works here!
The Hollywood Fats Band existed from 1974 to 1980 and released only one studio album in 1979 on the small PBR International label. Over the years, several previously unknown live recordings have been released, including bonus CDs on two new Hollywood Blue Flames productions released in the early 2000s (Hollywood Fats Band minus Fats), and a set with The Paladins.

Positive: the playlist is rather unusual and delivers some songs the band didn't have before!
Conclusion: all fans of the amazing Hollywood Fats will welcome this CD series and this first album and will have their fun!
Michael 'Hollywood Fats' man (guitar), Al Blake (harp), Fred Kaplan (piano), Richard Innes (drums), Larry Taylor (bass).

Pure jump blues and some rock'n'roll.Fats at his best!