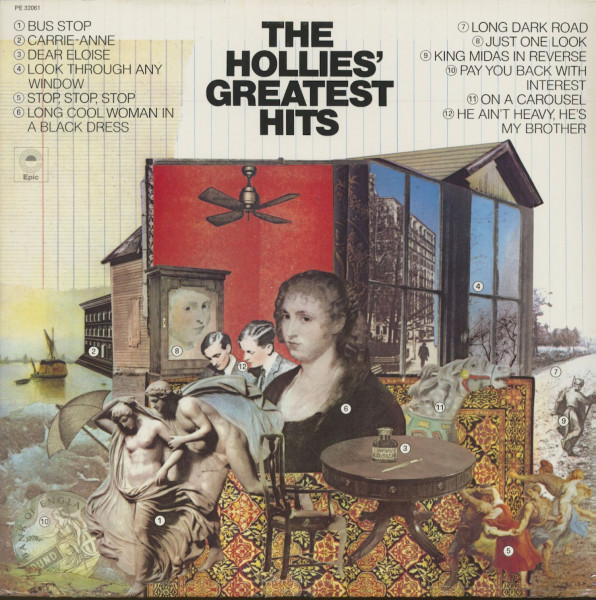 P Secure bonuspoints now
Description
Learn more about The Hollies
Review 0
Description
(Epic) 12 tracks The Hollies have been responsible for some of the best rock and roll of the... more
Close menu

The Hollies have been responsible for some of the best rock and roll of the nineteen-sixties and nineteen-seventies. This album contains twelve classic Hollies perform-ances representing each period of their maturation from British, blue-eyed soul bar-band to internationally loved and respected rock stylists, interpreters, composers and performers. The Hollies are one of the few groups that rode the Beatle wave to success that actually had distinctive talent; that explains their longevity where others have long since changed their styles or their names or their occupations.

The Hollies, in their nine years of rocking and rolling, have done the three things that most people recognize as representative of a high level of achievement: firstly, they have successfully taken songs written by others and made them their own, style-wise and hit-wise; secondly, they have success-fully written hits for themselves; thirdly, they have written songs that were successful as hit material for other artists. Whereas they started out singing and playing their own unique intepretations of great rock hits by Chuck Berry, Little Richard and the rest of the pop pantheon, by 1967 they had tucked under their belts the honor of writing 3/4ths of an album for the Everly Brothers and backing that famous rock duo on the recording sessions for that Lp (Two Yanks In England).

They set out down that long road from imitator to equal in 1963 and, in the ten years since, have reached, and maintained themselves at, the same level of achieve-ment and popularity as literally any other rock idol you might care to name. All the evidence is contained herein. In 1967, when The Hollies switched record labels (from Imperial to Epic), they had already reached their superstar status, with a dozen chart-topping hits and seven albums. (One was never issued in the U.S.A.—Vintage Hollies.) Since the switch, they have turned in a similar amount of hit singles, and, with this release, a similar number of Lp's.

From that first half of their career, we have included in this collection six songs that represent well their earlier sounds. Savor their version of Doris Troy's 'Just One Look,' one of their earliest hit singles. Hear their progression to 'Look Through Any Window,' their first stateside hit, written especially for them by English songwriter Graham Gouldman (who also wrote 'Listen People' and 'No Milk Today' for Herman's Hermits and 'For Your Love' and 'Heart Full Of Soul' for the Yardbirds), and thento 'Bus Stop,' also written for them by Gouldman. 'Bus Stop,' the definitive summer record, was their big breakthrough and today remains a masterful recording.

Since their first recording sessions, The Hollies had been writing their own material, and it had appeared only as album cuts (usually credited to a non-existent L. Rans-ford) until the day they released 'Stop, Stop, Stop.' It was an instant smash, and they followed it with 'On A Carousel' and 'Pay You Back With Interest,' which also clicked. It was at that point that they switched American labels. Their next three singles were all about girls: 'Jennifer Eccles,' 'Sorry, Suzanne,' and 'Carrie-Anne.' Of these, only 'Carrie-Anne' appears on this album. Look for 'Jennifer Eccles,' 'Sorry, Suzanne' and a number of The Hollies' excellent interpretations of Bob Dylan songs on The Hollies' anthology to be released late this year.

By then, times had changed, and so had The Hollies. Even they were experimenting, and their experiments showed up on 'Dear Eloise' and 'King Midas In Reverse,' the latter the first Hollies' hit to reflect deeper lyrical content. But the changes were just beginning to manifest themselves.

In that spell, The Hollies did two significant things. First, they replaced Graham Nash with former Swinging Blue Jean Terry Sylvester. Secondly, they recorded an album of songs by Bob Dylan. On that album were some performances thought by many to be definitive Hollies' constructions, the way they took Dylan's familiar songs apart and rebuilt them entirely, in a way few artists have ever been able to do.

Their first hit with Terry was 'He Ain't Heavy, He's My Brother,' which has since become a standard in the truest sense of the word. It is the song that The Hollies are proudest of having recorded, according to Tony Hicks—and rightly so, for the mes-sage and the impact of the song. A two-
year drought in America followed but in 1972, The Hollies had perhaps their big-gest U.S. hit, in 'Long Cool Woman In A Black Dress,' and then quickly followed that with 'Long Dark Road,' their first hit single in years to have been written by a group member. (Tony Hicks wrote it with his friend Kenny Lynch.) And that takes us to the present, the point where singer Allan Clarke left the group and was replaced by Mikael Rikfors. The hits that they are cur-rently rolling up with him will be collected on an anthology like this one in the future; just give them a few more years to rack up the records.

In the meantime, listen to the best of The Hollies as we knew them when. When Eric Haydock was playing bass. (He left just prior to the 'Bus Stop' recording session.) When pop songs were innocent and so were we. The Hollies have changed with us as much as they changed us. And, for all their successes, they have not become aloof. They are as eager as the next fellow to meet their fans and admirers, and that is certainly a laudable characteristic. It epitomizes their attitude of total professionalism in their work: when they are touring or recording it is all work and no fun & games—they are quite content to save that for vacation time and off days.

It can all be summed up quite neatly by saying that The Hollies do what they do as well as anyone; better in fact. That is why this album exists. And that is why you are listening to it. —Toby B. Mamis