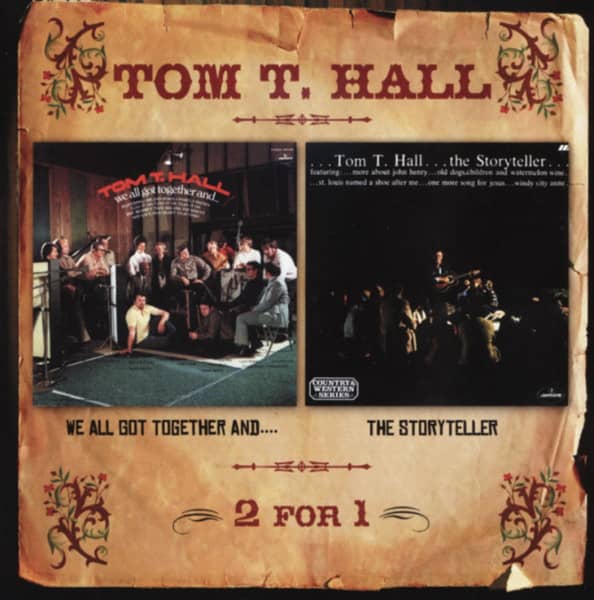 Tom T. Hall: We All Got Together And ... - The Storyteller

Article properties: Tom T. Hall: We All Got Together And ... - The Storyteller 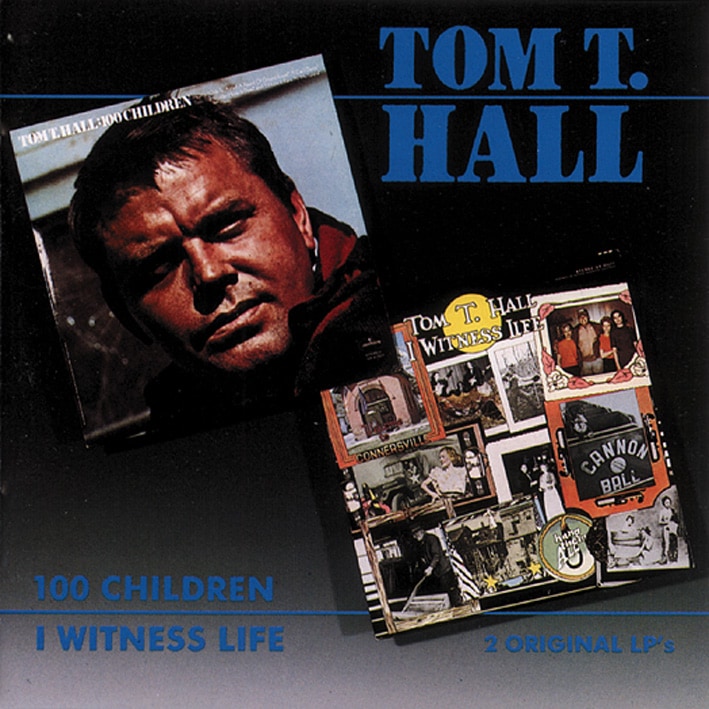 Hall relocated to Music City in 1964, invited to hisliving as a songsmith at Newkeys. Success didn’t happen overnight, but Johnny Wright made Hall’s Hello Vietnam a 1965 C&W chart-topper, and Tom’s Billy Christian received plenty of exposure as the flip side of The Statler Brothers’ blockbuster Flowers On The Wall that same year. Hall also wrote extensively for truck drivers’ favorite Dave Dudley, a mainstay presence at Newkeys (Dave cut Tom’s droll Mad in 1964 and had a hit with Hall’s patriotic What We’re Fighting For the following year). It was Key’s idea to add the middle ‘T.’ to Hall’s moniker, just to add a little pizzazz.

Key convinced Mercury Records A&R man Jerry Kennedy to sign Hall as an artist in 1967. Hall decided he’d give it a try, cutting I Washed My Face In The Morning Dew as his Top 30 C&W debut with Kennedy producing. Yet Mercury wouldn’t profit from what was likely Hall’s most enduring composition of all. Singer Margie Singleton, wife of former Mercury honcho Shelby Singleton, asked Tom to write her a new number. He responded with the humorous Harper Valley P.T.A.

Margie didn’t immediately commit the epic tale of a young woman successfully facing down her judgmental neighbors to tape, but Shelby, by then heading his own Plantation label in Nashville, had sassy young chanteuse Jeannie C. Riley belt the tune with none other than a moonlighting Kennedy adding musical punctuation on dobro. Not only did Harper Valley P.T.A. become a #1 1968 country juggernaut, it followed chart-topping suit on the pop hit parade as well, rendering Jeannie an instant star and earning Hall some enviable royalty checks. Tom T. was suddenly a hot commodity.

1968 was also when Hall started scoring major hits of his own, his offbeat Ballad Of Forty Dollars going Top Five country. Homecoming followed suit the next year, and A Week In A Country Jail was his first chart-topper in early ’70. Each and every one of them told a fascinating real-life story, Hall’s keen eye for detail and subtle shading distinguishing his recordings from boilerplate weepy country fare. The driving Shoeshine Man and an ominous Salute To A Switchblade gave Hall more sustained 1970 success. The Year Clayton Delaney Died restored Tom T. to the peak of the country hit parade in ’71.

The ‘70s brought Hall a string of mammoth country sellers. A touching (Old Dogs-Children And) Watermelon Wine soared to the top of the C&W hit parade in early ’73, and the spicy Ravishing Ruby, spiced with mariachi horns, sold very well later that year. Hall deemphasized his country content a bit on some of his top sellers during this period and found mainstream acceptance in the process; the slightly mawkish I Love, basically a laundry list of Tom’s favorite things counted off at a snail’s pace, not only sat atop the C&W listings, it just missed Top Ten pop status in late ’73, while That Song Is Driving Me Crazy, Hall’s first #1 C&W hit of 1974, incorporated a razzmatazz Dixieland horn section. More country chart-toppers—Country Is and I Care—soon followed. Hall’s jolly ’75 hit I Like Beer remains a beloved staple of polka bands worldwide to this day.

Faster Horses (The Cowboy And The Poet) was Hall’s final #1 country entry for Mercury in 1976, though he continued to navigate the upper end of those charts with an unexpected bluegrass-drenched treatment of Manfred Mann’s Fox On The Run and his own Your Man Loves You, Honey. He defected to RCA in 1977 and enjoying more solid sellers with What Have You Got To Lose, The Old Side Of Town, and Jesus On The Radio (Daddy On The Phone), all Hall originals. After a brief early ‘80s stint on Columbia, Tom T. returned to his old Mercury stomping grounds and registered one last C&W Top Ten entry with his revival of the Tin Pan Alley chestnut P.S. I Love You, which harked back to a 1934 hit rendition by Rudy Vallee.

Not particularly enamored of tirelessly working the country oldies circuit to endlessly regurgitate his hits, Hall took it relatively easy in his later years, performing and recording only as much as he cared to. He passed away August 20, 2021 at the age of 85 in Franklin, Tennesseesecure in the knowledge that his was a unique songwriting talent. When it came to telling a mesmerizing story with clean, crisp precision that more often than not tugged at your heartstrings with a mellow, burnished pull, Tom T. Hall was an unalloyed master.