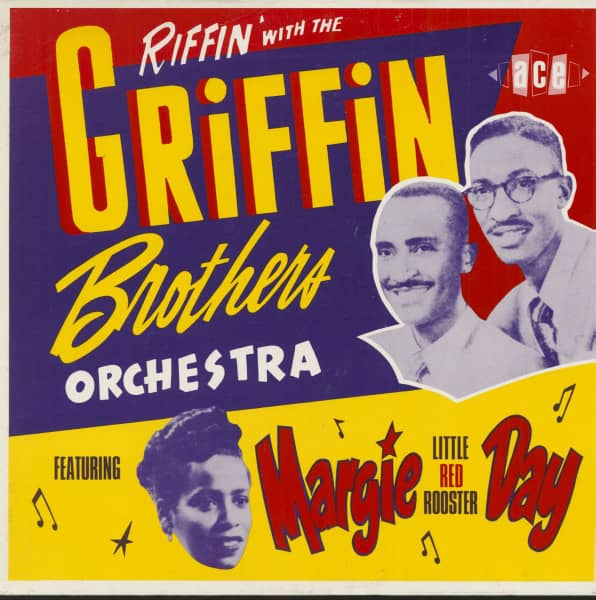 This article is deleted and can no longer be ordered!
Please inform me as soon as the product is available again.
P Secure bonuspoints now
Description Review 0
Description
(Ace Records) 16 tracks - Original 'Dot' recordings from 1950 to 1952 The Griffin Brothers have... more
Close menu

The Griffin Brothers have been overlooked by most R & B journals and books, with the exception of an exploratory article published some 18 months ago in the now defunct 'Pickin' The Blues' magazine, so that their story remains largely unknown. This seems exceptional when you consider that they scored at least 5 R & B hits in the early fifties. The mystery deepened with the speculation as to whether MCA had access to the 30 year-old Dot masters. We are now happy to clarify that point with this, the first-ever Griffin Brothers' collection on micro-groove. Essentially the Griffin Brothers were a fine jump band inspired by the earlier sounds of Louis Jordan, Lionel Hampton and Roy Milton, but purveyed with a modern flavour, all rolled up, drained of guts, per-formed in a belted-out presentation, and embellished with the latest harmonic trends and extended lines. Appearing on record in 1950, they soon became one of the hottest bands playing the chittlin' circuit. The band was fronted by two brothers, Jimmy Griffin, a fine trombonist and Ernest 'Buddy' Griffin, an ac-complished boogie pianist and occasional vocalist. It's been suggested that the Griffin brothers originally hailed from Atlanta, but they were born and raised within a few miles of the US Naval Air Station and Navy Yard in Norfolk, Virginia. receiving their early education there before going to New York's famous Juillard School of Music. Another brother, Wilbur Griffin, sang with the gospel quartet, The Progressive Four, who were established during the 1930's in Washington D.C. under the guidance of Lillian Claiborne, who went on to manage the Griffin Brothers. Ms Claiborne was one of Washington's most active entrepreneurs in the blues and gospel fields. She operated her own D.C., Loop and Gamma labels, and recorded a host of acts including Frank Motley and His Crew, The Heart-breakers and The Cap-Tans, leasing many of her masters to larger companies, such as RCA, Gotham and Specialty. In 1950 she obtained contracts for two of her acts, The Griffin Brothers and The Cap-Tans, with the newly formed Dot label based in Gallatin, Tennessee. Dot was owned by Randy Wood. originally from McMinnville, Tennessee. After leaving the Air Corps in 1944 Wood opened an appliance store in Gallatin, where he stocked a few 78 rpm records. He quickly saw that he could do better business stocking records than with other goods, and so the store became Randy's Record Shop, one of the leading mail order shops in the South and a particular favourite with American servicemen stationed in Europe. Early on, Wood had flirted with R & B when he recorded a local boogie pianist, Richard Armstrong, for his Randys & Cheker labels, with a song 'Gene Nobles Boogie' dedicated to the popular D.J. Gene Nobles, who hosted W.L.A.C.'s rhythm & blues pro-gramme. W.L.A.C. was one of the hottest radio stations, and Nobles was responsible for breaking many of the nation's biggest R & B hits. When Wood started his business he had booked $30 worth of spot announcements per week on the station, the number eventually grew to six 45 minute shows, plus six 1 minute spots and an hour-long show every Saturday night. Initially the Dot label concentrated on the hillbilly, blues and gospel fields and Wood signed many im-portant acts including the Fairfield Four, Cecil Gant,
Mac Wiseman, Jimmy Newman and The Counts, but it was the Griffin Brothers who gave him his first chart success. However, things began to change by the mid-fifties. Wood dropped his hillbilly & blues series and moved into the lucrative popular music field, signing artists such as Pat Boone, Billy Vaughn and Lawrence Welk. These acts became big money spinners for Dot and resulted in a move to new headquarters in Hollywood — the rest is history. The Griffin Brothers' story starts in Washington D.C. where they were based under the wing of Lillian Claiborne. They soon picked up a young female vocalist, Margie Day. from Norfolk, Virginia who had been studying music at the Virginia State College. Ms Day was a keen fan of the popular singers Billie Holiday and Ella Johnson. She appeared on the Griffin Brother's first Dot recording 'Street Walkin' Daddy' (Dot 1010). The flip was an instrumental 'Riffin' with Griffin'. It made the R & B charts in 1950 and was followed by 'Little Red Rooster' (Dot 1019) which became an even bigger hit, reaching No 5 on the R & B chart in 1951, where it remained for seven weeks. (It should not be confused with the Willie Dixon composition 'The Red Rooster' recorded by Howlin' Wolf on Chess). As a result of their success, Margie Day and the Griffin Brothers took off on a vigorous string of dates through the South. One tour was booked as support to Roy Brown where they played the tobacco towns of Virginia and North Carolina. Brown later asked them to appear as session musicians for his next King recording session in Cincinnati — the result of which was Brown's biggest hit, the singular 'Hard Luck Blues'.

The Griffin Brothers discovered their other vocalist, Tommy Brown, a fine shouter in the style of Wynonie Harris, while touring down in Atlanta in January 1951. They accompanied him on a Savoy session produced by Lee Magid, although they were
not credited. The sessions produced the marvellous 'Atlanta Boogie' and 'The House Near The Railroad Track'. Apparently Brown never signed a contract with Savoy, and he soon joined forces with the Griffin Brothers. Brown's first date with them produced 'Tra-La-La' (Dot 1060), a cover of the Dave Bartholomew original on Decca 48216 (see "Jumpin' The Blues Volume I Ace LP CH 94). It completely obliterated the Bartholomew side, peaking at No 7 in August 1951 on the R & B charts. This was followed by a song featuring Margie Day, when she covered Tampa Red's 'Pretty Baby Blues', called 'Pretty Baby' on the Griffin Brothers release, coupled with a Griffin, Day & Watts composition 'Stubborn As A Mule' (Dot 1070). It reached No 10 on the R & B chart in December 1951. Mention must be made of the fine musicians in the Griffin Brothers' band Wilbur Dyer on alto saxo-phone, Virgil Wilson on tenor s., Jimmy Reeves on bass and Emmett Shields on drums, although some changes took place in 1951 with Wilbur Little re-placing Reeves and Belton Evans and Noble Watts replacing Shields and Wilson respectively. Watts later made a name in his own right when he recorded 'Hard Times' for Baton, which charted in 1956. These musicians can be appreciated on the many Griffin Brothers' instrumental sides such as 'Griff s Boogie', 'Blues With A Beat' and 'Shuffle Bug', which are power-house jump R & B shuffles, set against the riffing trombone of Jimmy Griffin. underpinned by the rolling piano boogie figures of Buddy Griffin, which are bridged by the scorching tenor breaks of Noble Watts. The Griffin Brothers' last big chart success came with the influential 'Weepin' & Cryin' (Dot 1071), portraying Tommy Brown's crying vocals and emotion-drenched lyrics including the line "I threw out my breakfast and poured coffee in my hair" sung to a doom-laden saxophone lead on a funeral march. This followed Dot 1070 into the charts in December 1951 and gave the Griffin Brothers their biggest R & B chart hit. peaking at No 3. A flood of similar styled performances followed with 'The Bells' by the Dominoes on Federal and 'Weepin' Blues' by Rosco Gordon on Sun. The Griffin Brothers continued to record many other interesting sides, although with-out further chart success. Margie Day unsuccessfully covered Ella Johnson's 'I'm Gonna Jump In The River' (Dot 1104), and Tommy Brown left to pursue a solo career with King Records. Margie Day followed suit and signed to Decca. Eventually a split took place in the Griffin Brothers when Buddy joined Chess in 1954 with his new vocalist Claudia Swann. Jimmy remained with Dot for a while and found his own girl singer, Jean Sims, but eventually signed to Atlantic's new sub-sidiary, Atco in 1954. A new group called The Griffins appeared on Mercury in 1955. They were essentially a doo-wop style group, but instrumentally the old Griffin Brothers' sound was evident, and the credits to the sides went to J. Griffin. Perhaps it was a last chance for the brothers to get aboard the new rock 'n' roll bandwagon. Hopefully with this release, some enter-prising US researcher might track down the brothers, Margie Day and Tommy Brown so we can get the full Griffin Brothers' story. RAY TOPPING 1985