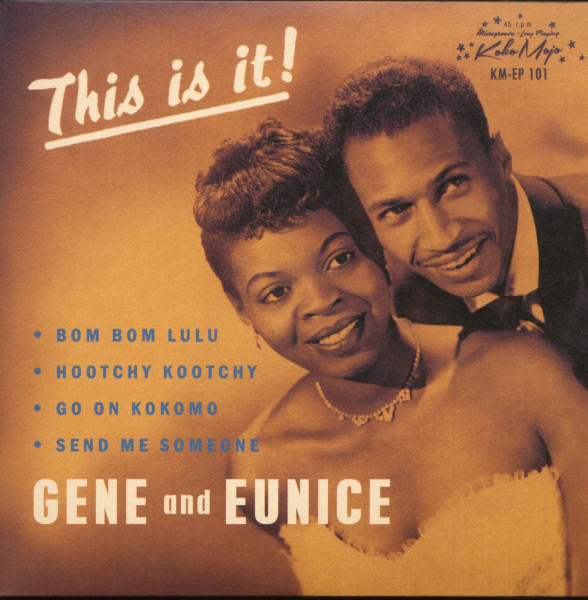 (Koko Mojo) 4-Track EP - With picture sleeve, 45rpm, wide center hole - Gene & Eunice 'The Sweethearts of Rhythm And Blues' were a Los Angeles based duo composed of singer-songwriters Gene Wilson (a.k.a Gene Forrest) and Eunice Levy. Gene was born Forrest Samuel Wilson, Jr. on September 3, 1931, in San Antonio, and Eunice was born Eunice Hazel Russ on March 12, 1931, in Texarkana. Texas. Gene & Eunice recorded more than a dozen self-penned songs between 1954 and 1959. The two met at local DJ Hunter Hancock's talent show in Los Angeles. They started to date and they decided to get married after being together for a short time.

They had a # 6 Billboard hit in 1954 with Ko Ko Mo a song covered by the likes of Perry Como, Louis Armstrong, the Crew-Cuts, the Charms, Hawkshaw Hawkins and at least a dozen more only in the first months after the song was released. Ko Ko Mo was originally recorded for the small Combo label but they re-recorded it again for Aladdin. Gene & Eunice became extremely popular and made appearances at the Apollo Theatre and Dick Clark's television show. They had an another hit the following year with This Is My Story who reached # 8. in 1956 the duo cut Boom Boom Lulu (Aladdin 3351) which was based on a traditional West Indies song. It did not make to the American charts but it was a hit in Jamaica. Gene & Eunice were a big influence on Jamaican music and early Reggae. Many of their 45s were reissued on Jamaica's Blank Records and Down Beat Records and were covered by Jackie & Doreen, Bunny & Rita (Bunny Wailer and Rita Marley) and other Jamaican singers. Gene & Eunice recorded a lot of great songs for Aladdin but they never had another hit, so the label finally let them go in 1958. Shortly after that Case Records signed Gene & Eunice.

They recorded Poco-Loco paired with Go-On Kokomo (Case 1001) and the single reached # 48. In late 1958. Other records were released by the label but none of them became a hit or sold anything. The duo split two years later in 1960. Gene got himself a day job and Eunice married again and she continued to perform and record. In 1960 Combo Records issued Send Me Someone (Combo 165) by Eunice Levy a song probably recorded in 1954. Enjoy the boss tunes on this little platter. Gene & Eunice at their best here! 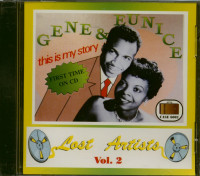