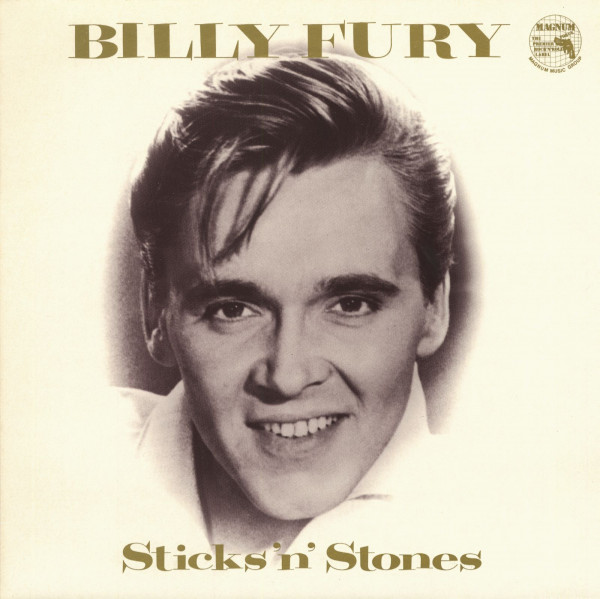 Ronald Wycherley was born in Liverpool on 17th April 1940. A period of serious illness with rheumatic fever in 1946 would lead to severe repercussions later in life with various ailments and specifically the heart problems that led to his premature death at the age of 42 in 1983. As a child and youth, Ronald suffered more than once from extended periods of illness, growing up to be a sensitive and slightly isolated lad with a keen interest in wildlife.
"I was always sick, I was always in hospital, lying in bed somewhere and I missed a hell of a lot of my schooling… every time I got back to school I didn’t know the kids - I was always the stranger."
Music was also a passion and though his attempt at piano lessons was short-lived, he was given a guitar on his 14th birthday and Ronald and his friend Billy Hatton (later to find fame as the bass player with Merseybeat combo The Fourmost) practiced together. It wasn’t long before Ronald was composing his own songs. “I could only play three or four chords so instead of trying to play songs that needed chords I didn’t know, I started writing my own songs using the chords I did know”. He carried on with his music after leaving school in 1955 and by the time of the skiffle craze, Ronald was working as a deckhand on a tugboat. He and other members of the crew formed The Formby Sniffle Gloop and a few years later, Ronald recalled his first public performance, playing Singing The Blues onboard the tugboat. A handful of local gigs ensued but the other group members moved on and Ronald left the tugs to begin work in a department store. While working at the store, his romantic disappointments with two women, Frances and Margo inspired several songs that saw later release including That’s Love, Margo, Don’t Knock On My Door and Maybe Tomorrow and he was also entering talent shows such as the ‘O.D.V.A. Talent Show’ in Bootle.

The earliest recorded evidence we have of the artist who would become Billy Fury is a two-sided 10inch acetate thought to have been recorded on the 18th of April 1958, the day after Ronald’s 18th birthday. Entered in the studio log book as ‘Youth with guitar’, this session took place at Phillips Sound Recording Service in Liverpool and consisted of four songs associated with Elvis Presley and two Wycherley originals - Love’s A-Callin’ and Baby. The site of this recording session is now commemorated with a blue plaque because later in the year, a local skiffle band called The Quarrymen (who went on to some notoriety) recorded two songs there for a demo disc .
It has been said that a tape of this session (along with a photograph taken at the local Star Studio) was sent to  ‘Pop Svengali’ Larry Parnes and led to the moment that changed Ronald’s life but Billy Hatton and noted Fury historian Chris Eley have also suggested (based on Hatton’s personal involvement and three friends who were present) that Hatton, Ronald and drummer Kenny Thompson recorded a different set of songs on a friend’s tape recorder at an address in Hawkstone Street specifically to send to Parnes. Hatton recalled, “I know that before he went to the Essoldo in Birkenhead, he came to our house and said, there’s some auditions going on in Birkenhead with this London agent. Will you come over and play for me. We got the train over there and ended up in this room. So that’s where he did his audition. Larry Parnes actually wasn’t there, it was one of his sidekicks but I actually played on the audition.” Chris Eley says that following the audition, Parnes’s agent gave Ronald a blank tape reel and he, Hatton and Thompson recorded Margo’and possibly Collette and My Babe and sent the reel to Parnes. Larry then wrote back to Wycherley asking him to be at the Birkenhead Essoldo when Marty Wilde’s package tour was in town. As Hatton relates, “Several weeks later he (Ronald) came down with his guitar in a cloth and he said, I’ve got to go over to the Essoldo in Birkenhead, there’s a show, they want me at it, I might be going on.”

Marty Wilde was due to appear at the Birkenhead Essoldo on 1st October 1958 and Ronald made his way backstage to see whether Marty and Larry were interested in his songs. Accounts vary slightly but essentially, the upshot was that on impressing both Wilde and supporting artist Vince Eager, their manager, Larry Parnes asked Ronald, “Have you got guts?” before almost literally pushing him onstage to open the next half of the show. The two thousand-strong crowd went wild and Parnes gave Wycherley £5 and told him to be at the tour bus at 10.00 the following morning. Interviewed for the ‘Liverpool Weekly News’ minutes after his by all accounts sensational three minute debut, Ronald commented, “I sent a tape recording to Larry Parnes a few weeks ago and I was asked to come here tonight”. The next day, Ronald was on the tour bus heading for Stretford Essoldo, Manchester.
Accounts differ as to when Ronald Wycherley became Billy Fury. When discussing this later, Billy said his preferred stage name was Stean Wade. Larry offered ‘Billy Fury’ but lost a coin toss over the choice. Needless to say, Ronald said he was slightly surprised the next time he was mentioned in the press (Billy said it was in an interview for the Daily Mirror) that his name was Billy Fury ! This may be another case where legend has become accepted fact as no such press mention can be traced despite extensive research and in fact, Vince Eager (who was on the bill for the Marty Wilde tour) has stated that the name Billy Fury was in place for the October 2nd performance at the Stretford Essoldo, Manchester even if it was too late for his name to appear in the programme and on posters.

Although this tour was now over (Marty was back on the road in a different package on the 5th), Larry Parnes had a busy month ahead. Within days he was in dispute with Jack Good whose new tv show ‘Oh Boy!’ was proving to be an instant sensation and is now widely regarded as the first truly great British rock ‘n’ roll television series. Larry was upset that Marty’s appearances on ‘Oh Boy!’ were being overshadowed because Good was giving too much time and preferential treatment to a new unknown artist (that’s Cliff Richard to you and me) and he made plain his displeasure with Good for this in the national and music press when he withdrew Marty from the show. The big loser in all this was Marty and during November he began trying to extricate himself from his contract with Parnes, who, not for the first or last time, found himself at loggerheads with an artist and an extremely valuable promotion outlet. In the midst of all this drama, Parnes was laying the groundwork for his latest discovery, Billy Fury and secured him a spot in a television play and arranged an audition with the record company responsible for Marty Wilde’s releases, Philips.

The 24th October 1958 ‘New Musical Express’ reported that Parnes’s new 16 year old discovery (he was 18 !) would be appearing „in a straight acting role in AR-TV’s play ‘Strictly For The Sparrows’ next Friday” and on 31st October, Billy did indeed appear briefly as a teddy boy, strumming his own song, Maybe Tomorrow. All he needed now was a record deal. The audition with Philips Records took place around this time but in what Billy later described as his most disappointing professional moment, he was rejected. His disappointment was short-lived as a matter of days later he was auditioning for Decca Records who decided to offer him a contract.
According to David and Caroline Stafford’s biography ‘Halfway To Paradise’, it was Larry (to his great credit) who persuaded ‘The Supreme Record Company’ that Billy should record his own composition Maybe Tomorrow for his debut release, perhaps mindful of the exposure it had already received  on television and to their credit, Decca allowed this. The song was recorded on 26th November and Billy also penned the B-side Gonna Type A Letter which according to paperwork was cut the following month, probably after revisions by Harry Robinson (a.k.a. Lord Rockingham) who earned a co-composer credit for his work. Released in January 1959, Maybe Tomorrow eventually reached the hit parade in March peaking at number 18 for two weeks in April, a promising start to his chart career. Larry had booked him for the top pop television shows of the day including appearances on ‘Cool For Cats’ (January 23rd), ‘The Jack Jackson Show’ (28th January) and ABC-TV’s ‘Oh Boy!’ (14th February and 14th March) and his first one-night stand tour opened at Worksop Regal on March 15th with a bill featuring Johnny Duncan and his Blue Grass Boys. The day after the end of this tour he was back on the road with The Mudlarks package show.