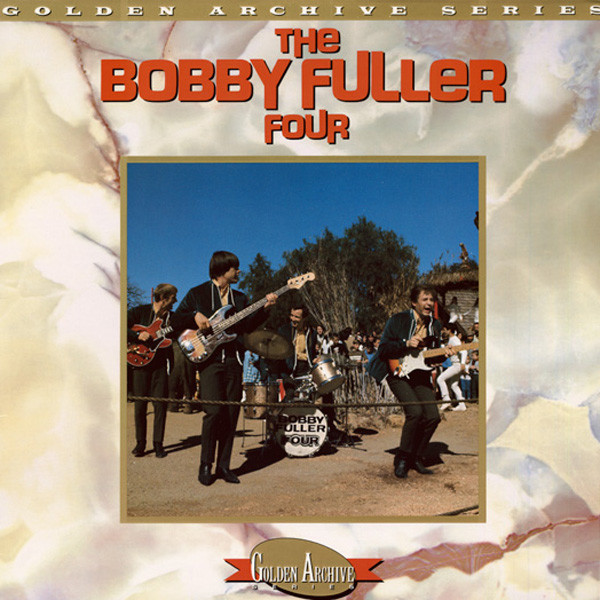 P Secure bonuspoints now
Description
Learn more about Bobby Fuller
Review 0
Description
The Bobby Fuller Four's “I Fought the Law" is one of the classic radio hits of all time.... more
Close menu

The Bobby Fuller Four's “I Fought the Law" is one of the classic radio hits of all time. Whether it was the first time you heard the record in 1965. or the thousandth time on some oldies radio station. the song's exuberant. infectious punch has contributed to its enduring quality. In recent years top rock acts like Tom Petty and the Clash have revived the song with newly recorded, reverent versions.

“Bobby was a true genius.“ said Paul Politi. a promotion man for Mustang Records-Bobby's label—in the mid-1960s. “He could play every instrument himself, and play it really well—that was rare for those days- and he was very into electronics. As a person. he was an introvert. but a very giving person. He was the most serious person about his music I've ever met.“

The Bobby Fuller story began in El Paso. Texas. In the early 1960s. he converted his parents‘ home into a demo studio. While America was smitten with the British Invasion. Fuller went to Hollywood to try to encourage interest from a record company. But. he wasn't English. and his sound wasn't polished enough.

Back in El Paso he concentrated on improving the acoustics of his studio and the quality of his arrangements in the process, several of his demos were released by minor local labels like Eastwood. Todd Yucca and Exeter [the latter was the bearer of the first version of “I Fought the Law").

Bobby Fuller also ran a teen nightclub called the Rendezvous During this period he became disconcerted by the effects that drugs and alcohol were having on the visiting musicians, and of their consequent lack of professionalism. He also experienced disappointment whenever a "hit" band failed to reproduce the sound of their record. whether through lack of competency or due to the studio effects needed in making the original recording. Later on Bobby Fuller insisted on making records that sounded exactly like the band sounded live. Many inspired overdubs were erased when the song proved too complicated to be recreated live. The self-imposed handicap ensured that no one was very disappointed with the band's live performance.

In 1964. he collected together a “Bobby Fuller Four" to assault Hollywood and the big time. The band consisted of Randall. his brother. on bass. Dwayne Quirico on drums. and Jim Reese on rhythm guitar. (Much later Dwayne was replaced by Dalton Powell, and in the interim. Johnny Barbata played drums on a few tracks.) While there was considerably more interest this time around. Bobby Fuller was more discerning. The major labels—then still being staffed by old liners with bland. pop tastes—lacked a sensitivity _to the new rock music. On the other hand, Bobby-was attracted to Bob Keane's Mustang Records label, in part because Ritchie Valens had been the star of Keane's previous Del-Fi label. (Buddy Holly and. to a lesser degree. Ritchie Valens were Fuller's biggest in?uences. His cover of Holly's “Love's Made a Fool of You" followed “I Fought the law" into the national top thirty.)

Bobby Fuller was also impressed by Keane's concern for quality. state-of-the-art recordings. The Mustang studio situated over a bank vault in a Hollywood building. was equipped with two of the first three 8-track recording machines to operate in Los Angeles. It was not uncommon for Keane to master a record 30 times in order to get it right. It was in this environment that the sound of the Bobby Fuller Four was realized.

Although the initial attempts to popularize the group included trendy stabs at surf (“Thunder Reef‘ ' under the alias of the Shindigs] and car songs [note “King of the Wheels." which broke the group in the Los Angeles area], it wasn't until the quartet settled into a more familiar medium that they became successful.

In the spring of I966. Fuller's mood tumed to one of disenchantment. according to Politi: “He had been on tour playing a lot of clubs. In those days there really weren't concert halls. and clubs were essentially places for guys and girls to meet each other. Bobby Fuller didn't feel his music was being received the way he would have liked it to be. He said to me, ‘It might as well have been a juke box playing up there, for all the difference it made —they don't need us.’

“At the same time. playing nightly took time away from composing. After ‘I Fought the Law’ became a hit. more product was needed. so Bobby had to record other people's maten'al—even if he thought it was inferior to what he could have composed if he had the time. "But a few weeks before his death. the situation seemed to be resolved. Bob Keane (also his manager) told Bobby Fuller that he didn't have to tour. just play I.os Angeles. so he could concentrate on recording and writing. At that time, it seemed that he'd gotten everything he wanted—except for the big success. which wasn't his primary goal.

“I was with him all the time. and I thought he was happy. There was a family atmosphere at Mustang. If he was planning to commit suicide [the "official" cause of death). why would he have planned to buy a Corvette the day it happened?“

On July I8. 1966, Bobby Fuller's body was found in the front seat of his car—parked in front of his apartment near Grauman‘s Chinese Theater—dead. apparently from swallowing gasoline. “Things just didn't add up. The police never impounded the car or dusted for fingerprints. He was beaten up. but that was never made public—nothing added up." The speculations ranged from a mob killing to a police cover-up.

With a return to rock'n'roll in contemporary music. Bobby Fuller's music is alive once again. From the best cuts of the “King of the Wheels" and “I Fought the Law" albums. to non-LP sides to the unreleased “I'm a Lucky Guy" and Randy Fuller's lead vocal on "It's love. Come What May." Bobby Fuller's invaluable contribution to rock music can once again be experienced. Bobby Fuller just touched upon what he could do. With only a couple of albums under his belt. his life was suddenly taken. If he were alive today. those who knew him speculate, there's no doubt he would be very big.