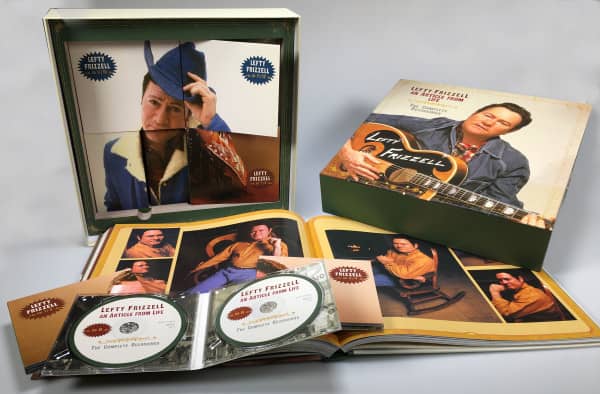 Bear Family’s penchant for behemothic box sets has always been a reissue industry standard.  Indeed, even today, with the majors bombarding us with similarly weighty, career-long round-ups (Nazareth, Judie Tzuke and Kate Bush are the latest), the Bear still stands head and shoulders above their efforts.
GOLDMINE November 28, 2018 - Dave Thompson


NOTE: If you send us a picture of you and one of the older Bear Family Records Lefty Frizzell box sets (the vinyl box or the first CD box), you will receive an individual 20% discount code on the box 'An Article From Life - The Complete Recordings'.
We publish your photo on our website.
20-CD boxed set (LP-size) with 264-page hardcover book. 361 tracks. Total playing time: 867:41 mns.
• The truly definitive set of the most influential singer in Country music history!
• All the hits, including If You’ve Got The Money, Always Late, Long Black Veil, I Love You A Thousand Ways, and thirty-five more!
• Every 45, 78, and LP track from Lefty’s entire career. Every unissued session recording!
• Newly-discovered demos and non-session recordings!
• Newly-researched biography and discography!
• Many previously unseen photos from the Frizzell family!
• A new designed 264 page hardcover book!
• Newly remastered!
• Many previously unissued recordings!
• Bonus: audio book on 8 CDs with Lefty’s life history, written and read by his brother David.
This is the cornerstone of every Country music collection! – Colin Escott, May 2018
Who was the greatest Country singer of all time? Some might say Merle Haggard, but Merle disagreed. ''There's no way I can describe the effect Lefty Frizzell had,'' Merle told us. ''The soul of Hank Williams, the appeal of Johnny Cash and the charisma of Elvis Presley. He had it all. He was dressed all in white - heroes usually are. The impact he had on Country Music, and on me is not even measurable.'' George Jones began his career almost as a Lefty tribute act. Much of Willie Nelson’s phrasing comes from Lefty Frizzell. When Roy Orbison joined the Traveling Wilburys, it was as Lefty Wilbury. Lefty's songs brought newfound poetry to Country music. Lefty Frizzell’s influence is incalculable.
A little history. We at Bear Family have always championed Lefty Frizzell. Back in 1984, when Lefty had almost been written out of the Country music story, we issued a comprehensive 14-LP box, ‘His Life, His Music,’ comprising all his known recordings. It wasn’t one of our best-sellers, but it needed to be done because Lefty was that important. Then Merle Haggard’s new recordings began shading closer to Lefty, and so did Keith Whitley’s records. People began talking about Lefty again. Willie Nelson recorded a tribute album, From Willie to Lefty, and Lefty’s younger brother, David, brought the Frizzell name back into the charts. Lefty was finally inducted into the Country Music Hall of Fame. And then the CD era arrived, so in 1992 we reissued our LP box as a 12-CD set, ‘Life’s Like Poetry,’ adding many newly-discovered non-session recordings, and redesigning the book to include many newly-found photos.
So now it’s more than 25 years after the CD edition. Even more recordings and many more photos have been found together with much more information about Lefty’s brief, incendiary life. Now it’s time for Bear Family to release the last word on the first name in Country music. This time it’s TWENTY CDs, including David Frizzell's audio biography that was not on our original LP box, and many that weren’t on the first CD box! The book is now a hardcover and greatly expanded in every way. I am just lost for words on how good the sound on Lefty Frizzell, An Article From Life box set is..It is much improved and has a warmer presence in the music.The book that comes with it has so many pictures I have never seen and reading it is such a joy.I had to write as I'm listening to cd 4 and say thanks for another great box set.Thanks to Richard Weize and all of you at Bear Family records for a great job.Thank you,Wesley Rose

This is the greatest box set that I've ever seen. Beyond beautiful. Magnificent! I feel your love. And the sound is amazing.

I just felt obligated to send you all a little feedback on the Lefty Frizzell "Article From Life" CD set that you recently released. I just purchased it from Amazon last week. Yes, it was a little expensive but this set is ABSOLUTELY FABULOUS and worth every last penny of that purchase price! I was simply blown away by the quality, not only the quality of the restoration of these recordings themselves, but the quality of the set itself, the box, the picture book, the audio book. This set is a true treasure. The obvious amount of work that has gone into the making of this CD set has not gone unnoticed. I am simply blown away, and just wanted to send my most sincerest and heartfelt "THANK YOU". Bravo Bear Family!

another masterpiece as usual...great to see photos of the real world away from the limelight

The revised book for this box set is well updated. Unfortunately, it does not contain detailed information for CD 13 - 20.

It would be difficult to over-praise this magnificent box set featuring one of the very best country singers ever.I t is stacked full of treasures and is beautifully presented and packaged. Spent most of yesterday listening to Lefty's fabulous music and have only skimmed the surface of this fabulous set. 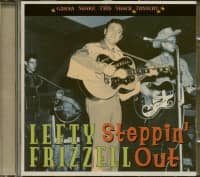