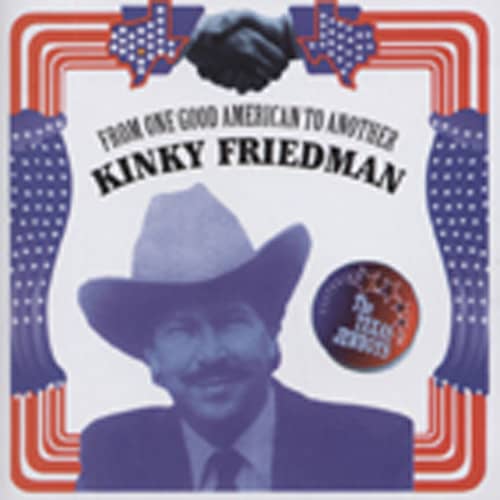 Please inform me as soon as the product is available again.
$18.18 *

Kinky Friedman: From One Good American To Another

Article properties: Kinky Friedman: From One Good American To Another 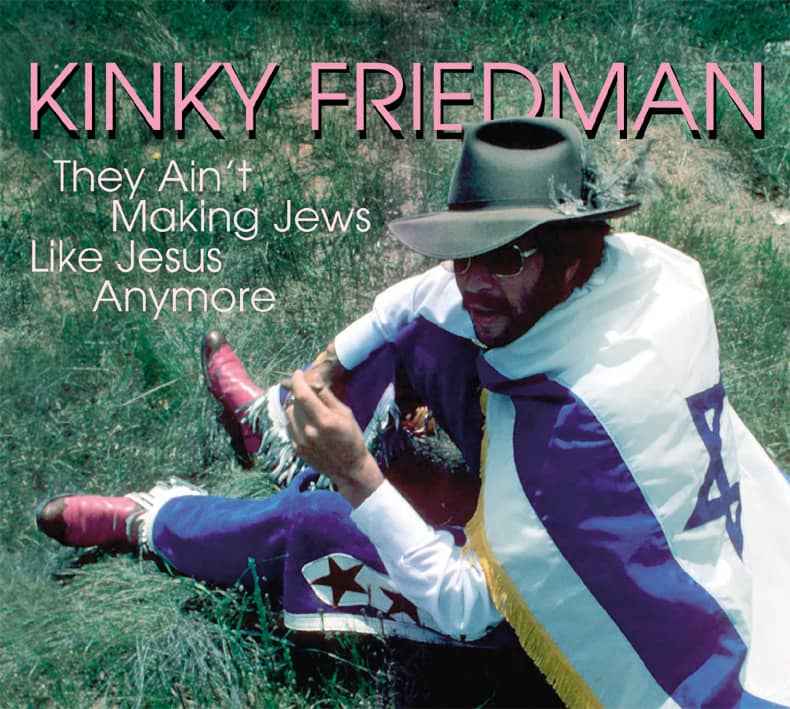 If nothing else, Kinky Friedman has been quotable. A selection: "Some things are too important to be taken seriously." "No sell-out too small." "Money is the root of all tedium." "Sincerity's the hardest thing. If you can fake that, you've got it made." "It's a small step from the limo to the gutter." "Money may buy you a fine dog, but only love will make it wag its tail."  He even inspires good quotes. His pal, the recently-deceased Captain Midnight (aka Roger Schutt), said, "He writes from the bottom of his heart and from the heart of his bottom."

You could say that Kinky has a warped sensibility, but he doesn't. He just sees a little deeper than most, and isn't afraid to confront what he finds. He is, as far as we know, the only country singer to write about the Holocaust or a mass murderer or a human kept in a cage as part of a circus show or abortion from a pro-choice standpoint. He's one of very few Jewish singers to even try for a career in the performing side of country music, and absolutely the only one to make Jewishness a major theme in his work. You could argue that he uses his Jewishness to get away with things that WASPs couldn't get way with (the same ploy that Don Rickles used when he was being odious), but Kinky's intention was usually satiric more than offensive. Some called him the Frank Zappa of country music; some compared him with Lenny Bruce, Monty Python, or the Bonzo Dog Doo-Dah Band. Perhaps, though, he's more like Popeye ("I yam what I yam and that's all that I yam").

Kinky, nicknamed for his hair, was born Richard F. Friedman in Chicago on October 31, 1944, but raised in Austin, Texas, where his father, Tom, was an educational psychologist. His mother, Minnie, was a speech therapist. Both, said Kinky, were from eastern Europe, although Tom certainly grew up in the United States. After the Second World War, Tom moved south to work as the executive director of the Southwestern Jewish Community Relations Council from 1946-1959. In 1959, he became a graduate student in the Department of Psychology at the University of Texas and worked as a special instructor and social science researcher in the Department of Sociology. After earning a Ph.D. in psychology in 1963, he became a professor of educational psychology until his retirement in 1983. From 1952, Tom and Min ran a summer camp for children in the Texas hill country. That camp, Echo Hill Ranch, is still there, and Kinky began his entertainment career on camp skit nights. He met Jeff Shelby at camp, and Shelby (aka Little Jewford) has been in almost every band that Kinky could afford ever since. The other Friedman children went on to respectable, if predictable, careers. His brother, Roger, is a psychologist and his sister, Marcie, works for the International Red Cross, but every family needs a black sheep.

Kinky's recording career began with a faux surf single on Jox Records under the name King Arthur & the Carrots (Schwinn 24/Beach Party Boo Boo). Some date this record to 1966, some to 1964, and the official discography states 1962…although '65 or '66 jives with what little is known of other Jox releases. Kinky entered the liberal arts program at the University of Texas, and joined the Jewish fraternity, Tau Delta Phi, that had blackballed David Geffen. The Carrots were active through university, but disbanded when Kinky served with the Peace Corps., including two years (1967-1969)  in Borneo. He was an agricultural extension worker ("teaching farming to people who had farmed perfectly well for 2,000 years") and the experience probably changed him more than the Borneoans. "Everyone needs to go to Borneo, wherever it is for them,"  he said later. "A lot of wiggy things happened to me in the jungle. It anchored my mind to the past. I became very magical, very powerful with no distractions. That's where I wrote all my material about America and Texas and patriotism."  Tom and Min came to see him once, and Kinky swears that they came into the jungle in a taxi driven by Harry Chapin. One of his oft-repeated jokes was that he introduced the frisbee to Borneo, "but the natives only used it to make their lips big."

Back in the U.S.A. circa 1970, Kinky formed the Texas Jewboys. In keeping with the group's satiric intent, every member had a politically incorrect name: Jeff Shelby (Little Jewford) returned, and the others included Big Nig, Panama Red, Rainbow Colors, and Snakebite Jacobs. They were allowed a lot of latitude on-stage. Jeff Shelby used to tell the crowd that his astrological sign was Faeces, and that got a good laugh from the anti-California, anti-hippie Texas crowd. Bass player Willy Fong Young was Chinese from Arkansas. "The rest," said Kinky, "are agnostics or worse."

Kinky and the Jewboys played the Armadillo World Headquarters in Austin at the very beginning of the scene, and then headed for Los Angeles to audition for Warner Bros. Records. "The secretaries at Warner Bros. loved my songs, and so did the young producers, but the guys in charge hated my songs," Kinky said later. "One Jewish recording executive said he couldn't sign me because he wouldn't know how to explain it to his mother." Among those who loved his music was Judy Maizel. Like Kinky, Judy was originally from Chicago, and became a production assistant at Warner Bros. Records. She introduced him to Chuck Glaser of the Glaser Brothers, and Chuck brought Kinky to Nashville to cut an album in 1972. To fully appreciate the struggling Nashville artiste experience, Kinky worked as a dishwasher at Shoney's…but only for two days. "Just enough so when I got to be famous I could talk about working as a dishwasher and sleeping in the kitchen. Actually, I wasn't going hungry. I was being kept on the family teat."  In other words, money from home.

Chuck Glaser's original plan was to release the LP under the title 'Kinky Friedman And The Texas Jewboys Sing 'Ride 'em Jewboy.'' "One day," said Glaser, "I got a call from a friend of mine in New York. He said, 'Chuck, this is friendly advice. If you go through with your plans, you're going to be run out of the record industry." And so the record came out as 'Sold American.' "It was thrilling," said Kinky. "Vanguard Records, the company that turned down Bob Dylan, signed us. We got our deal through Commander Cody. It was one of the snowplows for the Outlaw movement." The album appeared in February 1973. On June 2, Kinky appeared at the Grand Ole Opry with an unlighted cigar in his hand (the Opry famously had a no-smoking policy). Some of his gigs had been terminated early for offensive language, but the Opry seemed to evince a respect that the beerjoints didn't. He sang a song that he didn't release for another twenty years called Carrying The Torch (perhaps the same song that Slim Pickens recorded on Blue Canyon Records around this time). A rather obvious double entendre song, it was ostensibly about a woman, but actually about the Statue of Liberty. The Opry crowd liked it...or at least they applauded...