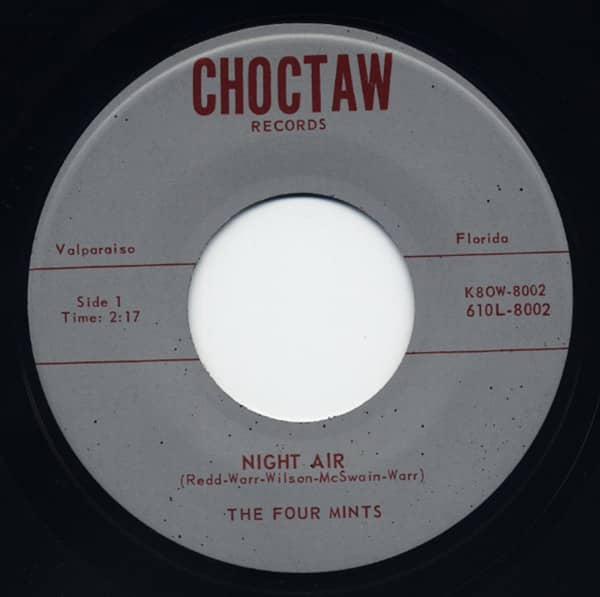 Please inform me as soon as the product is available again.
$23.75 *

Learn more about Four Mints
Officially formed in 1954 in Center, Texas and influenced by The Treniers even though The Four... more
Close menu
"Four Mints"

Officially formed in 1954 in Center, Texas and influenced by The Treniers even though The Four Mints were Caucasian, lead singer James Wilson, first tenor Gene Warr, second tenor Aubie McSwain, and bass Al Warr (Gene’s brother) debuted on wax in ’56 with a boisterous Busy Body Rock on Joe Leonard’s Lin logo out of Gainesville, Texas (Mitchell Torok had been their conduit to the label). They were then known as The Mints, a billing they retained when they cut the first version of Night Air in late 1955. Lin later coupled it with Ken Copeland’s Pledge Of Love; when Imperial picked the single up for national consumption in ‘57, it remained there as Pledge Of Love hit for the future TV preacher.

The name of the group changed to The Four Mints for a 1957 cover of Leiber and Stoller’s Ruby Baby on Decca, and it stayed that way when the quartet pacted with Bill Lowery’s NRC logo for Hey Little Nell and then the Ray Stevens-penned Wolf in 1958. Their last NRC platter was a gliding ’59 revival of the chestnut Tomorrow Night. That same year, the Four Mints faithfully revisited Night Air for the Choctaw label out of Valparaiso, Florida, rocking it all over again with an intense revival of The Drifters’ What ‘Cha Gonna Do on the B-side. The quartet unveiled MOR ambitions on their Aztec LP ‘The Fabulous Four Mints’ before splitting.