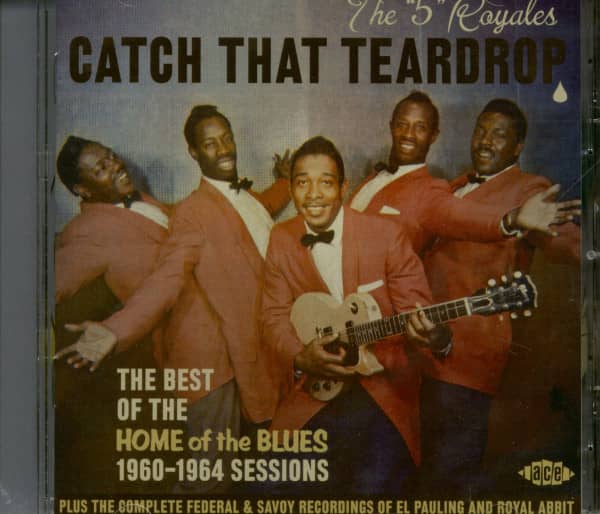 Behind every great soul group there’s usually another great soul group – and behind all of them, at the very foundation of soul harmony, there will always be the “‘5” Royales.
I love their ahead-of-their-time harmonies. I love the way that – like their spiritual successors, the Temptations – the “5” Royales were never afraid to interchange their lead singers to suit the mood of their material. I love the depth and breadth of their repertoire. I love the way they took doo wop and turned it into soul. I love the trailblazing guitar work and the songwriting of their premier league axeman, Lowman Pauling. There is absolutely nothing that I don’t like.
The group’s long-established level of adulation among R&B fans is now being duplicated among soul fans, who have been hunting down and making prized artefacts out of, principally, some of the recordings that appear on “Catch That Teardrop”, Ace’s new anthology of the best of their early 60s recordings.
At the dawn of that decade, the group’s contract with King Records was ending. Exceptionally popular in Memphis, the “5” Royales opted to sign with a new label based there. This gave them the opportunity to make records with musicians who went on to achieve fame as the architects of two generations of the Memphis Sound. With Poppa Willie Mitchell leading the band and producing the records, the Home Of the Blues sides couldn’t fail to be good. Unfortunately they did fail to be hits, with the end result that the original HOTB 45s are among the rarest that the “5” Royales ever released in a 30+ year career.
The best of these, along with the complete Federal recordings of El Pauling and the Royales’ pianist Royal Abbit, are gathered up on “Catch That Teardrop”. The title track and Take Me With You Baby both currently command between £200- 400 on the Northern Soul circuit. Likewise, such Pauling/Abbit sides as Everybody Knows are collected by New Breed R&B fans and played everywhere from Bury to Barcelona, yet almost none of the Federal recordings have ever been reissued since they first appeared on vinyl more than 40 years ago.
The shared lead vocals of brothers Eugene and Johnny Tanner offer thrill-a-minute stuff and they’re backed by vocal harmonies that are never less than sublime. The brass-heavy rhythm tracks show that Memphis soul was already alive and well and ready to do its thing a full year before records like Last Night and Green Onions indelibly defined the genre. And El Pauling’s amazing guitar work demonstrates time and time again why Steve Cropper has always acknowledged him to be a prime influence.
It’s been my privilege to be involved in the compilation and CDfication of no less than three compilations of the “5” Royales’ classic recordings. I have to admit that I am proud of this one.
By Tony Rounce

Learn more about The Five Royales
The "5" Royales I'm With You No matter how many sessions they cut for Cincinnati-based... more
Close menu
"The Five Royales"

No matter how many sessions they cut for Cincinnati-based King Records, The "5" Royales could never remove the glorious gospel feeling from their earthy output.

The quintet from Winston-Salem, North Carolina was enormously successful during their early secular days with New York's Apollo label (their Baby Don't Do It and Help Me Somebody both topped the R&B charts in 1953; the latter's flip Crazy, Crazy, Crazy as well as Too Much Lovin' and I Do all close behind over the course of '53 and '54). But when the Royales switched over to King later in 1954, the hits dried up despite the ongoing presence of church-fired lead Johnny Tanner and the increasingly blistering lead guitar of Lowman Pauling, their primary songwriter.

The quintet finally made it back to the R&B hit parade in 1957 with Tears Of Joy and the romping Think (later revived with a funkier groove by James Brown). Their Dedicated To The One I Love (featuring Johnny's brother, Eugene Tanner, up front) provided a blueprint for The Shirelles' subsequent hit rendition. Jimmy Moore and Obadiah Carter remained staunch in the chorus, as they had since their '51 Apollo debut date when they were still a gospel group, The Royal Sons Quintet.

Although the Royales usually cut at King's Cincy headquarters (or occasionally in New York), their February 3, 1960 session was held in Miami at Criteria Studios. Johnny torched Lowman's intense I'm With You, drenching his lead in sanctified fervor as Pauling's guitar provided a surging underpinning and the Royales chanted hypnotically. The storming flip, Don't Give No More Than You Can Take, and both sides of their King farewell, Why and the group-generated (Something Moves Me) Within My Heart, came permeated in pure holy roller goodness.

From King, the Royales signed with Memphis-based Home of the Blues, where they stayed from 1960 to '62 (the logo licensed some of their masters to Vee-Jay and ABC-Paramount). After a '63 date in Nashville for Todd Records, the quintet remade Baby Don't Do It and I Like It Like That under James Brown's supervision for Smash in '64. Lowman tried to break out on his own with five early '60s 45s for Federal under the name of El Pauling in partnership with pianist Royal Abbit. Pauling died December 26, 1973 in Brooklyn, his mind-boggling axe never gaining him the adulation he deserved. The equally spectacular Johnny Tanner died November 8, 2005. As one of the earliest R&B acts to bravely blend gospel into their attack, The "5" Royales were one of the founding fathers of soul.