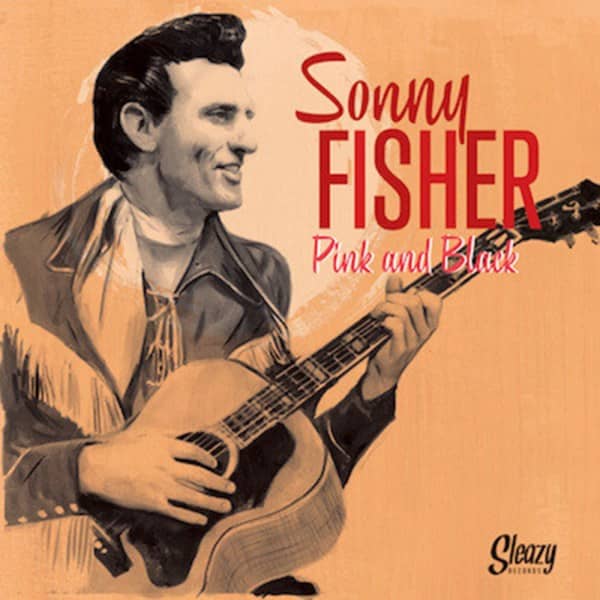 Therman 'Sonny' Fisher was a depression era baby born on a farm in the Lone Star State on November 13 1930 (Sonny's birth wasn't officially recorded by his mother until a year later). Perhaps it wasn't the best time for a struggling tenant farmer to be expanding his brood if he wanted to feed and clothe his offspring, but his daddy, Gordon, found hope and solace in music and the cowboy songs he used to sing and play along to. They must have made an impression on the young Sonny, along with listening to the likes of Hank Williams on the wireless, because he learned to play and sing too and by the age of 20, was forming his first band.

Initially a country band with steel, fiddle, bass and drums, part of this line up was to become the solid core of his subsequent band the Rocking Boys. Sonny's first band started to play country music around the Houston clubs and along the way, mined much of the rich seam of Rhythm & Blues sparking the blaze of musical transformation all over America. Sonny was already digging black music and joined forces with phenomenal Country Blues guitarist Joey Long, an outstanding multi-instrumentalist, who went on to become one of the first white musicians to play with black Blues bands in Texas. Joey had learned to play as a child from an old black sharecropper who lived down the road from his family.

Sonny's musical direction was cemented when he saw Elvis perform in Houston in November 1954. Right then and there, the rocking die was cast. Out went the fiddle and steel and the Rocking Boys (Sonny, Joey Long, Leonard Curry and Darrell Newsome) became the tight rockabilly band that created some of the most authentic rockabilly recordings in musical history. By January of the following year, Fisher and his boys were recording a session of 'Hillbilly Cat' styled songs at a self-financed session at Bill Quinn's Goldstar studio in Houston. Goldstar still operates today as SugarHill Recording Studios, one of the oldest continuously operating studios in the US. Quinn alerted Jack Starnes, one of the owners of the local Texas record label, Starday to the hot shots recording the new sounds and after hearing them, Starday signed Fisher to a one year recording contract. The four songs from that session became the first two Starday singles and helped shape the genre. March of 1955 saw their debut release: Rockin' Daddy b/w Hold Me baby. These and all the other Starday releases were written by Fisher. Rockin' Daddy became a regional hit but didn't achieve any wider success. Both sides are mid-tempo and showcase Fisher's vocals and Long's distinctive bluesy guitar sound.

The second release a couple of months later was Sneaky Pete b/w Hey Mama. These are more up-tempo tracks featuring blistering guitar work from Long and rhythmic, assured vocals from Fisher. Somewhere around this time, Elvis saw the band and was so impressed with the extra edge gained by the drums that he borrowed Newsome for a few dates and subsequently installed DJ Fontana as his permanent stick wielding sideman. The first two singles didn't make much of an impact but created enough interest for the boys to head back to the studio for another session at the relocated and updated Goldstar. The next Starday single was released in September 1955 and featured Rockin' and a Rollin' on the A side b/w I Can't Lose. June of 1956 saw his final Starday release, Pink and Black b/w Little Red Wagon. Pink and Black is a classic Rockabilly track, a jet propelled paean to a host of youth obsessions: cars, shoes, gals and Rock & Roll. The flip side is out of character with all the other Starday sides, with a distinctive western flavour.

The year's contract came to an end and though Starday would have renewed the contract for a further two years, Sonny was so disgusted with the paltry royalty cheque of $126, he decided to strike out on his own and formed a record label called Columbus in 1957 with Darrell Newsome, plus a publishing company named Newfish. Sonny didn't release any of his own recordings on Columbus but put out two singles by Eddie Eddings (Joey Long's replacement in the Rocking Boys) and sax player Herb Sutter. It is likely that the accompanying band for these recordings was the Rocking Boys with the addition of Sonny Burns, who had played guitar on Fisher's last Starday singles.

Fisher became disillusioned with running his own label too and sold his share of the company to Newsome, forming a new R&B band to play live in 1958. It was an all-black band and must have been a defiant though difficult outfit to run on the Houston nightclub circuit in a social climate where the Civil Rights Bill had just been passed and black students were being spat at for trying to go to school in Little Rock. This too was short lived and Sonny returned to playing Country Music for several years.

Eventually he left the music business in 1965 to take up a 'proper job', running his own floor-laying company. Fast forward to 1979 when the recently formed Ace Records released Sonny's Starday sides as an inaugural 10", helping to kickstart Ace, the Rockabilly revival and Sonny Fisher's second coming. Ace financed a UK tour for Fisher, using Johnny & The Roccos as his backing band. The entire outfit went into the studio in the mid 1980's to record new material. A new album followed later on Big Beat plus gigs in Europe.
After returning to Texas, Sonny went AWOL again for more than a decade but materialised in Spain in 1993, recording with Sleepy LaBeef and Los Solitarios. These were his last known recordings as Sonny did his disappearing act once more. He maintained his privacy and little is known about what he did in his final years until his death of cancer in October 2005.  (Aisha Khan)

Great release with songs of the early Sonny Fisher. Highly recommended to all rockabilly fans.