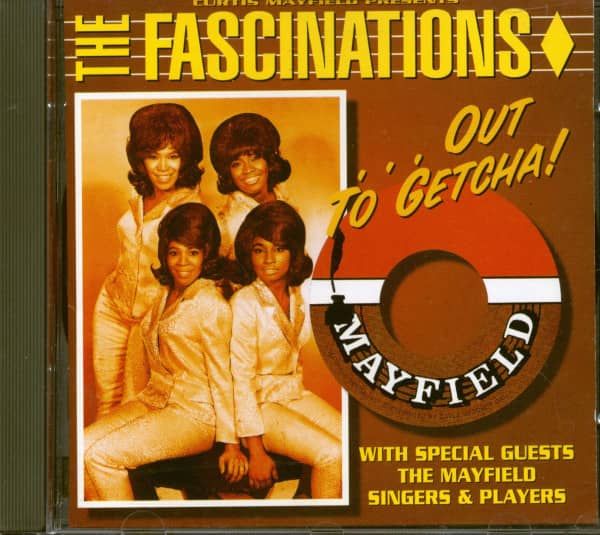 FASCINATIONS: Out To Getcha! (CD)

Girls Are Out To Get You

Girls Are Out To Get You

The Chicago soul sound was built to a large extent on the shoulders of Curtis Mayfield. As lead singer (after Jerry Butler's departure) and chief songwriter of The Impressions as well as the composer of several hits on the OKeh label for Major Lance and others produced by Carl Davis, Curtis was a prolific force prior to launching a very successful solo career at the dawn of the '70s.

Mayfield's instantly identifiable fret skills were a major part of his arsenal. "Curtis tuned up his guitar a lot different than anybody else," says Davis. "He had to find a different way to play the chords so he could accomplish what he was trying to do. And that's what gave Curtis the unique style that he had on his guitar." Mayfield made some splendid records with young female singers, notably Jan Bradley, for whom he wrote and produced her hit Mama Didn't Lie; The Opals' charming You're Gonna Be Sorry on OKeh, and The Fascinations, who hailed from the Motor City rather than the Windy City.

Consisting of lead soprano Bernadine Boswell Smith, her sister Joanne Boswell Levell, Shirley Walker, Fern Bledsoe, and at the start, Martha Reeves (she left in 1960), The Fascinations were discovered by Impressions San Gooden and Fred Cash. The first thing Curtis produced on the young Detroit quartet was a '62 cover of Mama Didn't Lie for ABC-Paramount that lost out to Bradley's version, following it up the next year with Tears In My Eyes. When Curtis formed his self-named Mayfield label in 1966, he got back to work with The Fascinations, which he also managed (Bledsoe had worked in the office at Motown in the interim). He inaugurated his new logo with their seductive Say It Isn't So, which made some national noise.

The delightfully upbeat Girls Are Out To Get You, another Mayfield composition, did even better, sailing to #13 R&B on the strength of its flowing rhythmic thrust (the baritone sax solo imparts a Motownish touch) and Bernadine's captivating lead effort, though it only made a #92 pop impression. The Fascinations managed one more chart entry with the Mayfield-penned I Can't Stay Away From You, but their last two efforts for the label, Hold On and Just Another Reason, didn't follow suit. When Curtis closed down the logo and dropped the quartet, they broke up. But they had a last hurrah: Girls Are Out To Get You became a surprise #32 British hit in 1971, prompting The Fascinations to briefly reunite for an English tour.