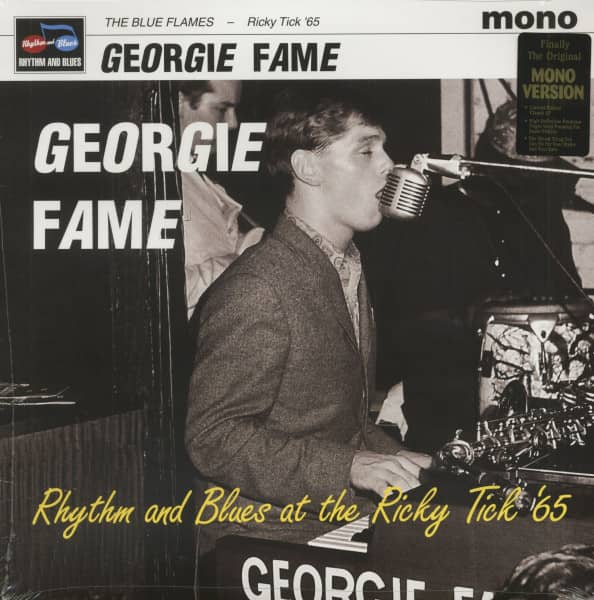 Georgie Fame & The Blue Flames: Rhythm And Blues At The Ricky Tick '65 (LP)

Back in 1965, the center of the mod universe was London's West End. Clubs like the Flamingo attracted hip young people to see the new R&B acts.
The biggest local act was Georgie Fame & The Blue Flames, who combined everything the new generation wanted to hear and dance the night away to: R&B, soul, jazz and ska. Out of town clubs were dropping "Jiving" and "Merseybeat" nights in favor of the new sounds that were pushing out of town.
In nearby Windsor, the Ricky Tick was the only place to be if you were a mod, and on May 1, 1965, the Blue Flames were at the top of the bill.
Fame was certainly a crowd pleaser. When he appeared at the club that night, he had just come off a tour with the first British Tamla Motown Revue.

He had been added to the bill at the last minute to boost numbers for the tour, which also featured The Supremes, Martha & The Vandellas, Stevie Wonder, Smokey Robinson & The Miracles.
Promoters knew Fame could attract the Mods.
A sincere-sounding Georgie told Rave magazine, "Since rhythm and blues came along, it's done a hell of a lot for honesty in music.
Young people today are cool. They're looking for the good things in life.
When you start looking for truthfulness and meaning and maturity, you're on the right track.' Well said, Georgie.