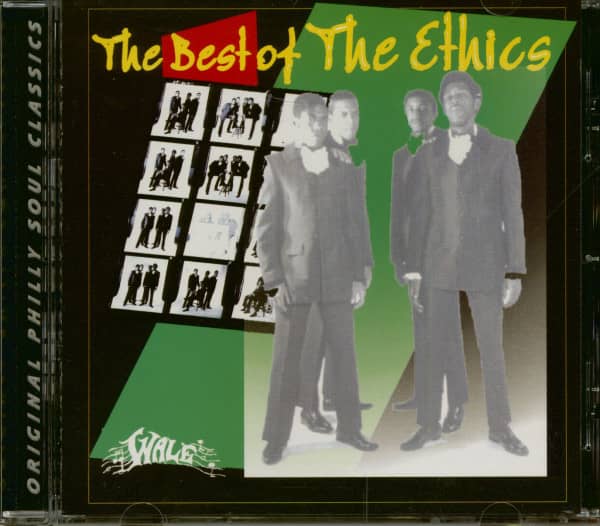 The Ethics: The Best Of The Ethics (CD)

(JAMIE/GUYDEN) 16 tracks 1968-1970 (50:29)
Ron Tyson's Soaring Tenor Set A Standard For Late 60s Soul Music That Comined With Thom Bell's String-And-Horn Arrangements And Vince Montana's Rhythm-Section Arrangements, Created The World-Famous Philly Sound Of The 1970s. This Release Covers The Sum-Total Of Their Independent-Label Releases On Wale And Vent Records, Plus Six Never-Before Released Tracks, Including Their Final Demos, It Is A Body Of Work To Be Proud Of, Ranging From The Dance-Craze 'Standing In The Darkness' To The Plaintiff Riffs Of Their Early Success, 'Sad Sad Story'. Ron Tyson Eventually Moved To The Temptations, But His Ground-Breaking Work On The Ethics Are A Tribute To And Foundation Of Sweet Soul Music

Article properties: The Ethics: The Best Of The Ethics (CD)

Learn more about The Ethics
The Ethics Philadelphia Soul Group 1968-1972 The Ethics represented the culmination of... more
Close menu
"The Ethics"

The Ethics represented the culmination of the Philadelphia sound in the late 1960s. With recording sessions at Sigma Sound arranged by Thommy Bell and played by bass player Ronnie Baker, guitarist Norman Harris and drummer Earl Young, the Ethics's recordings clearly showed the highest point in the evolution of sweet soul music that laid the foundation for the development within the next few years of Philadelphia International Records. Gamble and Huff used the exact same setup for their Philly Sound and took the two founding members of the Ethics -- Ron Tyson and Joe Freeman -- for the Love Committee, which itself recorded for Philadelphia International Records. The Ethics, which lasted from 1968 to 1972, had their final recordings on Golden Fleece Records, which was Baker, Harris and Young's unit of Philadelphia International, a production outlet for these talented session musicians whose recordings as the instrumental group MFSB highlighted their role playing the music that the world came to know as the Philadelphia Sound.

$90.48
Customers also bought
Customers also viewed
The Best Of The Ethics (CD)
Tracklist
Ethics, The - The Best Of The Ethics (CD) CD 1
01 Standing In The Darkness
02 Sad Sad Story
03 That's The Way Love Goes
04 I Want My Baby Back
05 Keep Away From Baby
06 Think About Tomorrow
07 Not Enough Love
08 There'll Be A Sweet Tomorrow
09 Look At Me Now
10 Searching
11 Tell Me
12 Farewell
13 Now Is The Time
14 Lonely Hearts
15 Lost In A Lonely World
16 Standing In The Darkness (Tom Moulton Mix)