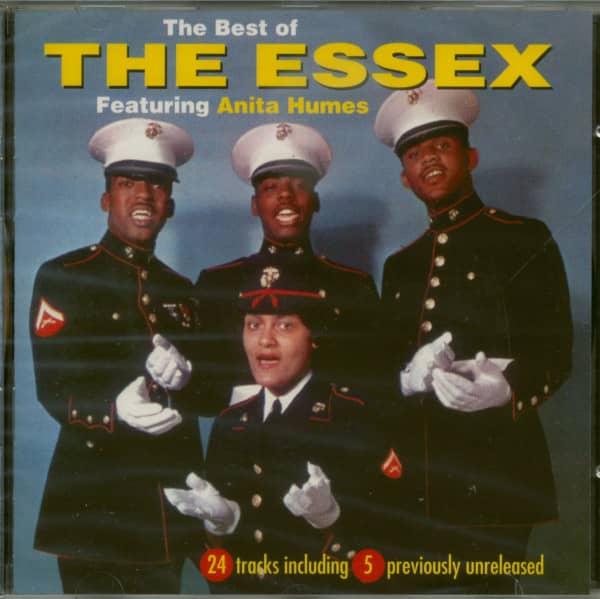 Military service doomed more than a few doo-wop groups. It also brought a few together. Such was the case with The Essex, five U.S. Marines at Camp Lejeune in North Carolina. Gary, Indiana's Rodney Taylor and New Brunswick, New Jersey's Walter Vickers had joined vocal forces in Okinawa before being shipped back stateside. They teamed with Billie Hill from Princeton, N.J. and New Yorker Rudolph Johnson, but it took 22-year-old lead Anita Humes, born in 1940 in Harrisburg, Pennsylvania, to make the group special. She'd enlisted in the Marines in October of 1960 and was singing at Camp Lejeune's NCO club when they met.

A demo was sent to Roulette Records, where it was heard by industry vets George Goldner and Henry Glover. The group snared furloughs so they could audition in person in March of 1963. Within 24 hours, The Essex (named after Essex, County, N.J.) were in the studio. Goldner and Glover didn't realize that Easier Said Than Done, the work of fellow Marines William Linton and Larry Huff, was a hit with its 'tick-a-tick' rhythm (Linton transposed the tempo he heard as a teletype operator) and Anita's clear-as-a-bell lead. It was designated the flip side to Johnson's Are You Going My Way when Roulette pressed The Essex's debut platter that May.

Reaction from the public decreed a happier fate for Easier Said Than Done. That July, the song sat at the top of the pop and R&B hit parades. Decked out in their snappy Marine uniforms, The Essex looked like no other act on the 1963 scene. Military duties limited their concert appearances; Johnson was shipped out not long thereafter. The group encored that August with a similarly catchy A Walkin' Miracle, produced by Glover and credited to four writers dubiously including Levy (Humes received featured billing). It went to #12 pop and #11 R&B that fall. Soul singer Jimmy Radcliffe co-wrote The Essex' third consecutive hit late in the year, She's Got Everything. Anita left the Marines that October. Roulette issued a last Essex single in 1964, Curfew Lover, before launching Humes as a solo.

After eight months on the road with Dick Clark's Caravan of Stars, Humes enlisted in the Army, married another soldier in October of '64 and settled into the routine of a military wife. Taylor was killed in a New York City robbery in 1966, the same year the reformed Essex, now Humes and two gents, cut a Bang single. A last 45 back on Roulette the next year and they were done. Anita Humes Chappelle was divorced and living in Harrisburg when she died May 30, 2010 at age 69.