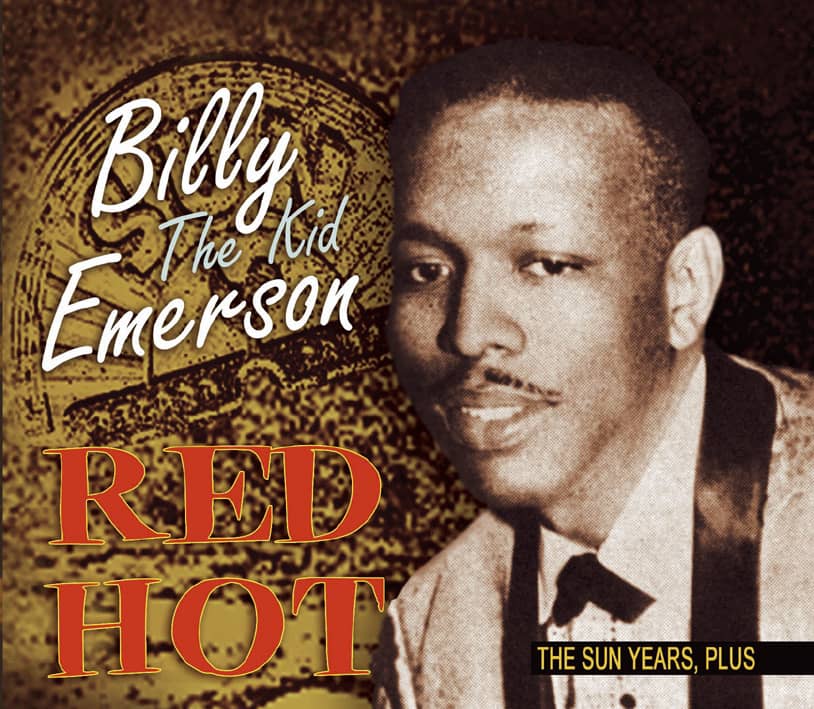 Same thing with record producer Sam Phillips, who told me, "Billy Emerson wrote such great songs. He was one of the very best." Through his recording career, Billy Emerson was never short of a good song title. People who've never heard of Billy Emerson have probably heard his best songs. One of them, Red Hot, has been a big hit several times over: in the '70s for new-wave rockabilly Robert Gordon, in the '60s for Sam The Sham, and in the '50s it served well for Billy Lee Riley, Ronnie Hawkins and Bob Luman. Emerson also wrote When It Rains It Really Pours, best known through Elvis Presley's version. His songs have been recorded by artists as diverse as Little Miss Cornshucks, Willie Mabon, and Ann-Margaret.

But this CD is all about Emerson's own recording career. More specifically, his 1950s recordings, made at a time when he had something seriously good and individualistic to contribute to the blues and to the development of R&B. We have collected together all his recordings for Sun, Vee-Jay and Chess – what a Curriculum Vitae that is, incidentally – and added his 1960 recording for the MAD label.

Recalling his days with Sun Records, Billy Emerson once told me: "At Sun, Sam Phillips was always wanting to hear something different, and back then I could just go away and think of something different to record overnight." That was probably why Sun issued more records by Billy Emerson than any other blues or R&B singer, and Emerson was one of only two blues musicians Phillips recorded into the rock 'n' roll era.

I first spoke to Billy Emerson over the phone in 1979, prior to his first visit to England. He'd sent me enthusiastic letters and been a very lively conversationalist – so it was something of a surprise to see him come on stage at London's Roundhouse, a balding, greying R&B veteran, walking slowly with a stick. He waited just long enough to generate murmurs in the crowd, then threw away the stick and jumped to life, and proceeded to knock crowds out with his music all over Europe.

"We put on a good, fast show," he said, back then, preaching an unnecessary sales pitch. "We leave them screaming for us wherever we go. We do 'Red Hot', 'Conjured', all kinds of stuff, mostly rhythm and blues, but some dixie jazz or some modern jazz, it's all part of me. It just all comes out."

Emerson's music has been "just coming out" as long as he can remember - and it was never the usual R&B fare, just as his '50s recordings for Sun, Vee-Jay and Chess were not quite of the mainstream for the time. An Emerson disc always had an unusual title, a strange hook, a complex rhythm, or another individual calling card to leave with you.

The Emerson songbook has been influenced less by an apprenticeship in southern honky tonks – though he's played a few of those – than by his early life in Florida , where he was taught by and played with good jazz musicians, and his love of big band blues and gospel music. 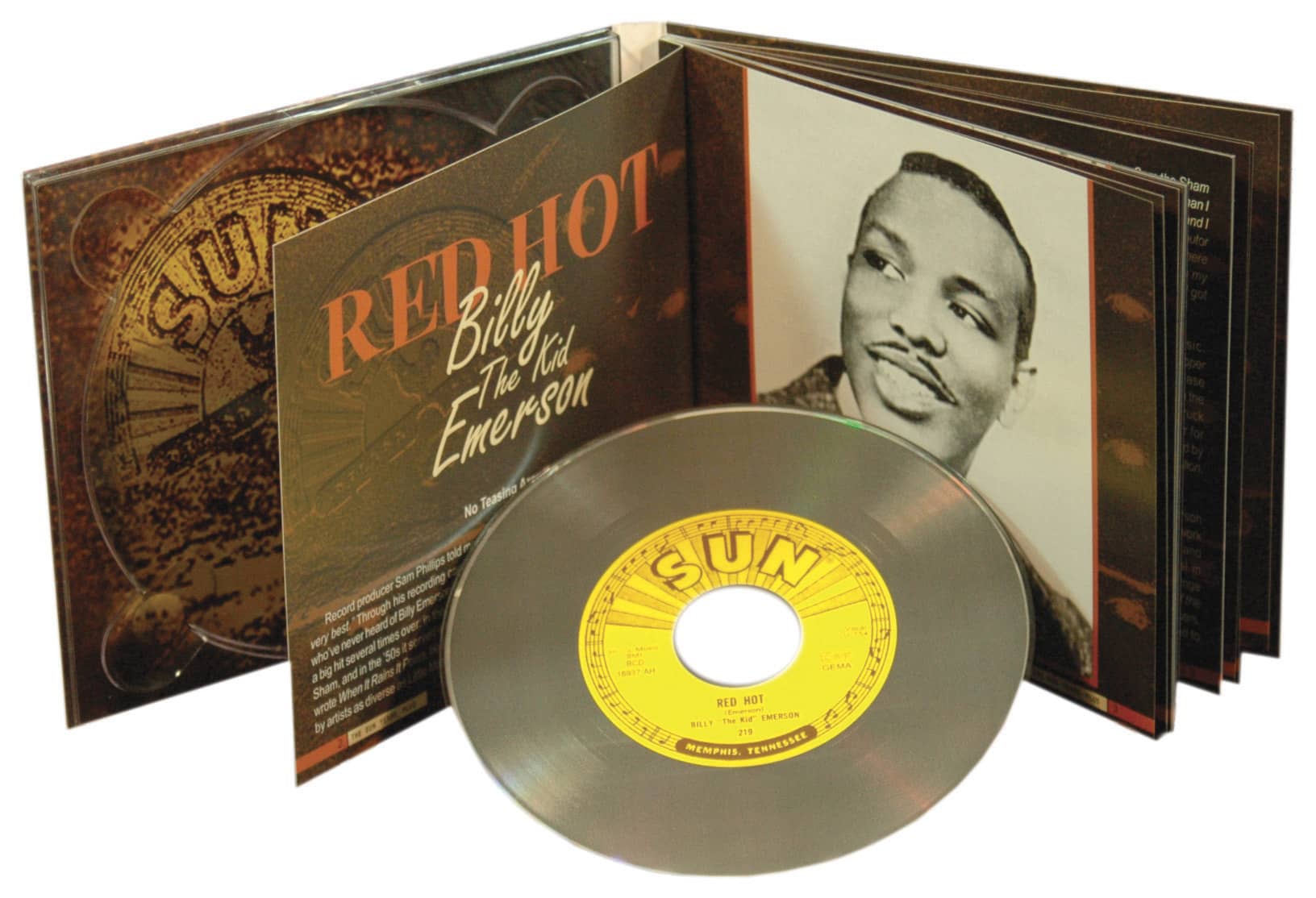 William Robert Emerson was born on 21 December 1925 in Tarpon Springs on Florida's gulf coast. During the early '30s, his mother encouraged him to sing in church and he says he can barely recall a time when he wasn't singing. But, he underlined to researcher Jim O'Neal: "My mother never sang any blues, never sang any around me. The only way I could hear a blues was from extra gang guys – railroad repair workers - or somebody come round singing a Bessie Smith song. A lady had an old graphaphone and she had a lot of blues records – Doctor Clayton, Memphis Minnie, Tampa Red, Butterbeans and Susie."

Billy told me matter of factly that "my family always were musicians," and that his father played piano: "I got into music through him and through my uncle, John Hannon (or Hannah), who was a church pianist but used to play a little boogie-woogie." Then he started listening to his next door neighbour, a man named 'Shine' who had played with the minstrel shows: "I used to watch Shine play the blues all the time when I was young. This was in the 1940s. Shine knew all the old classic blues." It seems that these informal lessons took the place of the more formal lessons Billy's mother planned for him, but which he had no patience for at that time. The official lessons cost a quarter, but "a quarter was hard to come by because it was during the Depression."

The process of thinking back to the '30s and '40s animated his conversation. He emphasised: "What inspired me, mostly, was the blues. And I was born right into the boogie era and the swing-jazz, Lunceford and Chick Webb and those guys. Louis Jordan, too, I was influenced by him and I liked his performing style a lot." On the same theme, Billy told Jim O'Neal: "When I was a kid, the blues singer that I really liked better than anybody else was Buddy Johnson, Buddy and Ella Johnson. They were the most unbelievable group that I've ever known in the field. He had his own style of doing them, and Ella had her own style of singing too. I was about 14, and I heard their song called 'This Life Just Ain't Worth Living Without The One You Love' and I say, You know what? If I ever get to be a singer I want to sing the blues like that."...

More information about Billy 'The Kid' Emerson on Wikipedia.org

Filter
No results were found for the filter!
Billy 'the Kid' Emerson: Red Hot - The Sun Years, Plus Art-Nr.: BCD16937