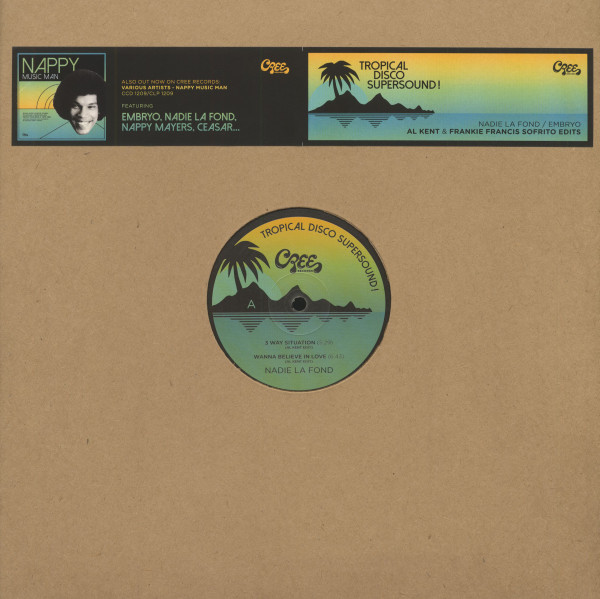 Wajang Woman edit by Frankie Francis (Sofrito Soundsystem)
Sofrito is a collective of DJs, producers and artists that combine a love for Tropical rhythms with a firm basis in modern club culture. Rooted in the legendary Tropical Warehouse Parties in East London, Sofrito mixes up vintage sounds from across the tropics with modern productions and exclusive dubplate specials, bridging the gap between eras and continents to produce a unique and intense sound that has seen them play at clubs and festivals across the world.
Hackney-based Frankie Francis runs The Carvery mastering and dubplate cutting studios, working on vinyl retrieval and mastering for labels such as Strut, Sir Collin's Music Wheel, NYC Trust, Superfly and many more, as well as cutting dubs for the cream of the reggae and Tropical DJs in the UK.

3 Way Situation / Wanna Believe In Love edits by Al Kent (Million Dollar Disco)
Glasgow's answer to Walter Gibbons. Million Dollar Disco DJ, record compiler, re-edit producer. When Al Kent launched the Million Dollar Disco label back in the '90s "Disco House" was all the rage. A life spent hoarding rare soul and disco records, a keen ear for a sample and a few years of DJing already under his belt stood him in good stead when it came to making music. He made a load of tracks by sticking house drums on top of disco samples and released somewhere in the region of twenty 12" singles, many of which found their way into top DJs' charts.
Ditching house music in favour of disco saw him first emulating his hero Walter Gibbons; cutting between two copies of each record, until he discovered he could save the hassle (and money spent on doubles) and make re-edits instead. He's released a ton of those edits over the years on Million Dollar Disco as well as a slew of labels like Jisco, Kat, Real Thing, Edit, Stilove4music, People Must Jam, Kalakuta Soul, Kojak Giant Sounds and All Out War. He's been round the world a few times too, playing in Australia, Canada, France, Poland, United Arab Emerates, Italy, Germany, Norway, Belgium, Sweden, Holland, Croatia - pretty much every country in Europe, every city in the UK and many locations in between. Al has had the honour of playing Southport weekender four times (more than any other "Connoisseur's Corner" guest) as well as headlining at prestigious events like Z Records' first (and, to this date, only) party in London and Ete D'Amour's boat party on the Seine, at the invitation of Dimitri From Paris. He was co-promoter and resident DJ at Manchester's legendary Northern Disco and regularly throws crowd pleasing parties in his home town of Glasgow.