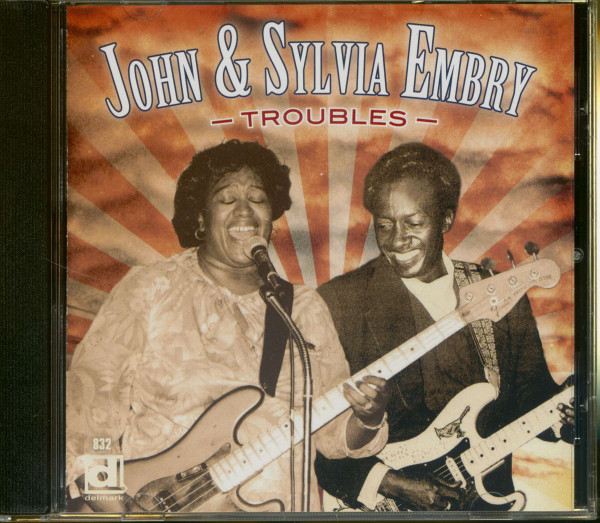 John & Sylvia Embry — Troubles
This is John and Sylvia Embry's first LP. It's a combination of John's ringing, all-blue guitar work and Sylvia's
swinging, gospel-tinged vocals. When they got together to do this album something happened. Thanks to two of
Chicago's most powerful performers, there is a little magic here you just can't find anywhere else. (from the original
LP) More information on John and Sylvia Embry enclosed.

Queen Sylvia Embry is best known as the bass-playing vocalist in Lefty Dizz and the Shock Treatment during the late 70s.  The group was immensely popular and played some of the best (and wildest) blues music in Chicago.  They were the house band for Blue Mondays at the Checkerboard and played regularly at the Kingston Mines. It seemed as if Sylvia was poised to break out as Chicago's leading blues woman as she started to front her own band and recording for three different labels in just a few years. 'John Embry was one of the city's fine but unheralded blues guitarists', said Sylvia.

They were married for a time but by time they recorded this album they had divorced. Recorded on January 19, 1979 by the tiny Razor label the original album, known as After Work, is long out-of-print. This new CD re-issue contains previously unissued material. This is classic Chicago blues at its best(1979 'Razor Records') 65:39/17.  Live songs recorded at Bold One Lounge, Chicago.

JOHNNY 'GUITAR' EMBRY Among the practitioners of urban blues in Chicago. a small group of relatively unknown musicians evolved a hard-hitting style of ringing. cutting guitar playing that makes no concessions to disco. rock or slick soul. These men played regularly for black audiences on Chicago's south and west sides, yet only occasionally played the more lucrative. white, north side clubs. Johnny 'Guitar' Embry is perhaps the bluest of these all-blue guitar players.

Since he first stepped up on the bandstand 16 years ago at Turner's Lounge, he played with and learned from many of the city's finest bluesmen. including Muddy Waters, and worked with Hound Dog Taylor when the group broadcast live on the Big Bill Hill Show. Johnny now performs at Buddy Guy's Checkerboard Lounge (where he sometimes teams up with his wife Sylvia. who plays bass for Lefty Dizz). Theresa's. Florence's. and many of the city's popular blues clubs. In the summer, he can often be found surrounded by a rowdy crowd at Chicago's famous open-air market on Maxwell Street. a place he likes to play because. he says. 'I can let my hair down and don't have to take no intermission.' Johnny credits Buddy Guy. Albert King and Sammy Lawhorn as influences. While Johnny's style is strictly urban. he notes that Jimmy Reed was the first bluesman to catch his ear. The two men became friends and Johnny recalled that Jimmy Reed would often stay at his house when the elder blues-man was in town. A religious man.

Johnny Embry was playing organ and guitar in church long before he began to play professionally. 'I know some people say you're serving the devil (by playing blues) but I don't see it.' Johnny said. 'Spirituals and blues music are the same. just expressed in a little different way.' Johnny 'Guitar' Embry's new 45 is his first effort on wax. It was recorded during the blizzard of '79 at Chicago's Sound Studios (where many of the excellent Delmark LPs were recorded) on January 18th.

The temperature was 20 below zero outside. but the music inside was hot -- the kind you can hear all the way down the block on a Chicago summer night. Every effort was made to reproduce the 'live' sound of a club date while retaining the full fidelity available from a studio recording. The resulting tracks speak for themselves. So. if you like your blues straight. try Johnny 'Guitar' Embry's new record. Like Johnny says. 'They can't kill the blues completely, the people still got 'em at home under the bed.' —Yours truly. Mark Lefens. for Razor Records John Embry passed away in 1987.

QUEEN SYLVIA EMBRY Queen Sylvia Embry was born Sylvia Lee Burton. June 14, 1941 in Wabbaseka, Arkansas. She played piano as a child and sang in church choirs. moving to Memphis when she was 19. She then settled in Chicago in the '60s where she eventually was known as the bass-playing vocalist with Lefty Dizz and the Shock Treatment. The group was immensely popular in the late '70s. They were the Blue Monday house band at the Checkerboard and won a north side following at the Kingston Mines playing some of the best (and wildest) blues music in Chicago. Sylvia met and married John Embry.

They had divorced but were still friends by the time this album was recorded. Most of this album. originally on Razor Records as AFTER WORK, was recorded on January 19. 1979. The album and the 45 are both long out-of-print. They are both presented here with the addition of previously unissued tracks. It seemed as if Sylvia was poised to break as Chicago's leading blues woman as she began a professional relationship with Jimmy Dawkins. On a European tour with the American Folk Blues Festival. she recorded for the L&R label. It was Sylvia's first full-length LP and featured Jimmy Dawkins. Carey Bell and Jimmy Rogers (issued in the USA on the Evidence label but now out of print). Other appearances followed on anthologies for Arhoolie, Alligator. L-FR. EPM and a single on Leric (reissued on JIMMY DAWKINS PRESENTS THE LERIC STORY. Delmark 808 ).

Sylvia even appeared in a film, Mississippi Delta Blues. Sylvia Embry returned to gospel music but her health declined and she died of cancer February 28. 1992. TROUBLES is classic Chicago blues at its best. — Robert G. Koester (Thanks to Alligator Records. Mark Lefens and All Music for the above info)