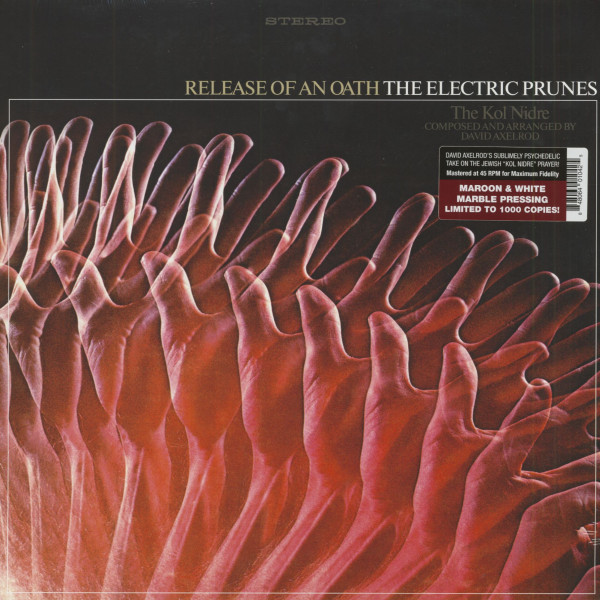 (Real Gone) 7 tracks, limited to 1000 copies
The Electric Prunes have produced four fantastic albums for the Reprise label in two years, but when they released "Release of an Oath", the last of the four albums, not a single member of the original band was left. But two key people were still there.
One of them was Dave Hassinger, engineer with The Rolling Stones, Jefferson Airplane, Grateful Dead and other superstar groups of the 60s, who retained the rights to the name Electric Prunes and acted as producer of the album.

The other was the legendary composer and arranger David Axelrod. Axelrod had already written and arranged the Prunes album Mass in F minor, whose complexity had forced the original band members to quit out of frustration.

Now, after composing a psychedelic Catholic Mass, Axelrod turned his attention to the Old Testament and especially to "Das Kol Nidre", the prayer that in the Jewish faith begins the Yom Kippur service.

Once again the orchestration proved too much for the then current line-up of the band (with the exception of vocalist Dick Whetstone), so Axelrod brought The Wrecking Crew on board, with guitarists Howard Roberts and Lou Morrell, bassist Carol Kaye, keyboardist Don Randi and drummer Earl Palmer.

Armed with this formidable line-up, Axelrod brought his trademark mixture of psychedelic rock, jazzy orchestration and avant-garde elements to full effect and created an album that still sounds fresh and up-to-date 50 years later.