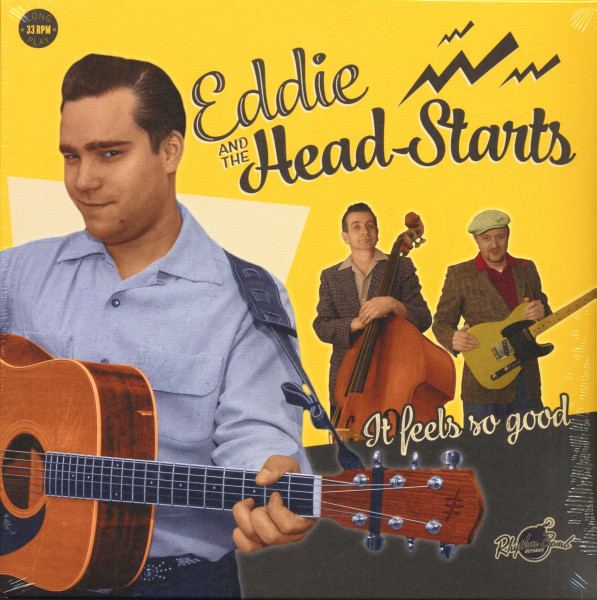 Eddie & The Head-Starts: It Feels So Good (LP)

(Rhythm Bomb) 12 tracks
With the 7inch single 'My Name Is Eddie' the band around Nico Duportal double bass player Thibaut Chopin has already introduced themselves to the scene, but they are named after rhythm guitarist and singer Eddie Gazel. In addition, Stephane Beaussart plays his twangend leads on the Telecaster - and a drumless style emerges, which shaped the early recordings of the SUN Studios in Memphis and the term Rockabilly generally iconic.

Recorded in Berlin by Axel Praefcke at Lightning Recorders Studio, the twelve songs on 'It Feels So Good' show that it doesn't take much hardware to play fiery, cool and danceable music. The trio makes the east of Paris unsafe and the musicians play wherever they find a good audience, whether in squatted houses, dance halls, clubs or restaurants. You can't keep the newborn Rockabilly alive much more pure than these three Frenchmen do.
The East of Paris is where it's at!
If you're looking for action in the city of lights, look no further. Live music, themed bars where musicians hang at or good restaurants that don't require you to sell a kidney to pay the bill.
It's also the birthplace and playground of Eddie & The Head-Starts aka your favourite local Rockabilly trio. Wether in Punk and Rock and Roll bars, squats, dance halls, clubs or restaurants, those boys are always willing and ready to spread the good word and keep live music alive. They have become a familiar face in that environment, meanwhile expanding their horizons as a band to many other places in France and the rest of Europe.
For their first recording effort, they chose to go way farther East: the East of Berlin, home of Lightning Recorder, the right studio for them thanks to its vintage analog equipment and skillfull team.
The result is 12 rocking tracks, recorded live with no overdubs. Sincere and passionate material made for people who like down to earth music.

Video von Eddie & The Head-Starts - It Feels So Good (LP)

Article properties: Eddie & The Head-Starts: It Feels So Good (LP)