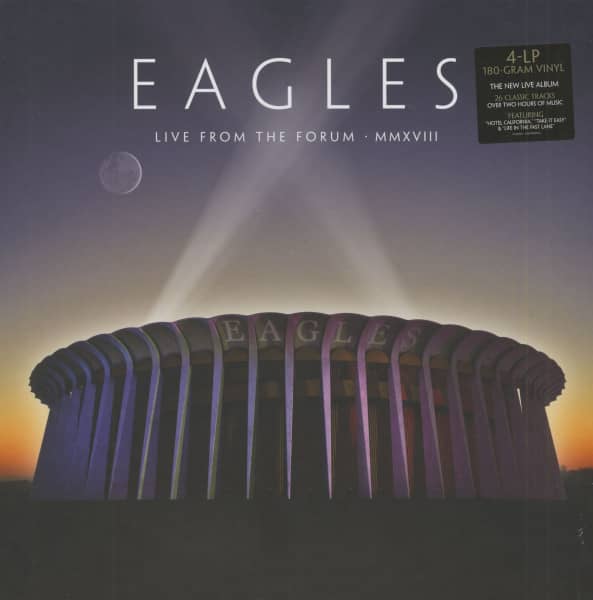 This article is deleted and can no longer be ordered!
Please inform me as soon as the product is available again.
P Secure bonuspoints now
Description
Learn more about The Eagles
Review 0
Description
(Rhino) 33 tracks The Eagles spent most of 2018 on an extensive North American tour, featuring... more
Close menu

(Rhino) 33 tracks
The Eagles spent most of 2018 on an extensive North American tour, featuring Don Henley, Joe Walsh and Timothy B. Schmit with Vince Gill and Deacon Frey.

Accompanied by praise from fans and critics alike, the quintet gathered at the Forum in Los Angeles to play three sold-out, acclaimed concerts on September 12, 14 and 15.

Highlights from all three concerts have now been compiled into a 26-song live album and concert film, which will now be released as "Live from The Forum MMXVIII" about Rhino.

In today's volatile, fragmented rock landscape, Eagles are a true force of attraction that spans generations and genres, cementing the band's role as enduring musical icons. As the most successful American band of the 1970s and one of the best-selling acts of all time, the Eagles have sold over 150 million albums worldwide, conquering the #1 album charts six times and the single charts five times in the U.S. alone.
Their greatest hits 1971 - 1975 and Hotel California are, according to the RIAA, the #1 and #3 best-selling albums of all time and have been awarded 38 times and 26 times platinum respectively.

The band has won six Grammy awards, was inducted into the Rock & Roll Hall of Fame in 1998 in their first year of eligibility, and received the Kennedy Award in 2016.

American folk rock group. The individual members previously played separately with Neil Young, Chris Hillman and Rick Nelson before meeting each other in 1971 as accompanists of singer Linda Ronstadt. In August 1971 they went into business for themselves, called themselves Eagles and tried their luck on their own. It worked out. Already in 1972 the first LP "Eagles" was released and immediately appeared in the hit parades. The uncomplicated, melodious folk rock songs with the catchy harmonies of singer, pianist and guitarist Glenn Frey (born 6.11. 1948 in Detroit), drummer Don Henley (born 22. 7.1947 in Gilmer), guitarist Bernie Leadon (born 19.7.1947 in Minneapolis) and bassist Randy Meisner (born 8.3.1946 in Scottsbluff) liked right away.

"Take it easy' was the group's first hit in the spring of 1972, and the most acclaimed LP to date, the aim of a concept album, was'Desperado' in 1973, in which the Eagles make comparisons to the modern existence of a rock musician and the existence of a gun of the last century. In Germany, the Eagles won through in 1975 with their single "One of these Nights'. Since March 1974 Eagles play with steel guitarist and singer Don Felder (born September 21, 1947 in Gainesville).

Review 0
Read, write and discuss reviews... more
Close menu
Customer evaluation for "Live From The Forum MMXVIII (4-LP, 180g Vinyl)"
Write an evaluation
Evaluations will be activated after verification.
Weitere Artikel von The Eagles
The Eagles: Trying To Get To You Art-Nr.: BF15232