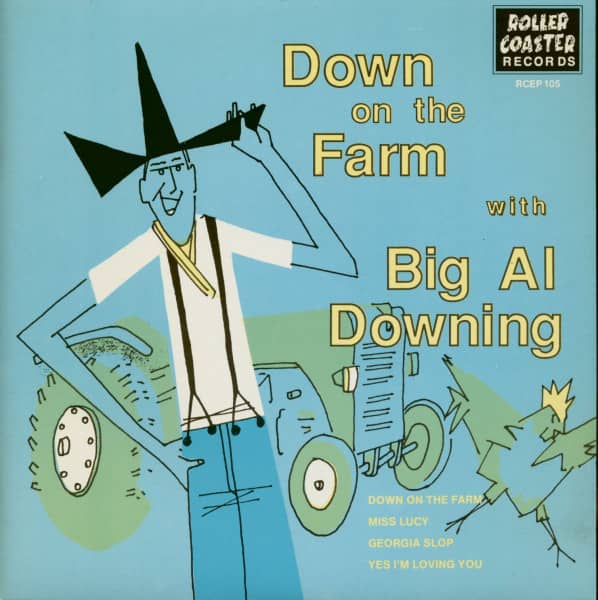 (Rollercoaster) 4 Tracks - Triangle Center - First Cover - few copies (minimal storage wear on cover only)
-
Down On The Farm may not have been the monster h it it deserved to be back in 1958, but today there is no denying its universal acceptance as a rock 'n' roll classic.

Originally recorded for the White Rock label in Dallas, Texas, the record became a hit in Oklahoma and Texas where it topped many local charts. At this point Challenge Records, a major Hollywood label, bought the master from White Rock for national distribution. Despite their efforts and several television appearances by Al the record failed to break through.

Al Downing was born on January 9th 1940 in Lenepah, Oklahoma, literally 'down on the farm'. When Al was in his early teens he and his brother were travelling home from the fields when they saw an old piano in a junkyard -they loaded it onto their wagon and carried it home. Although only around 40 ofthe keys worked it changed Al's life. He began picking up ideas by listening to radio station WLAC out of Nashville which at that time featured black r'n'b stars like Fats Domino and Joe Turner. At the same time Al was hearing white country music on the radio via the Grand Ole Opry's Saturday night broadcasts. It wasn't long before Al found himself in a band - Bobby Brant's Rhythm Rockers - as a result ofwinning a talent contest in Coffeyville, Kansas. The fact that the rest ofthe band were white made it quite a radical move for Al in the days of sometimes humiliating segregation laws but the fusion of black and white musical styles made it all worth while.

Bobby would do the 'white' Elvis and Jerry Lee numbers while Al covered Fats and Little Richard. Miss Lucywas Al's second for White Rock and this time Carlton Records of New York leased it nationally but it too failed to hit the big time. But Al never gave up - he continued to record for a variety of labels and stayed with rock'n'roll right up and into the British invasion when he recorded Georgia Slop in 1964 . . . a kind of Custer's last stand against the British beat groups who by then were having it all their own way, often with recycled fifties material.

From then on Al turned to soul music, and came up with the occasional minor hit. Then in the late seventies Al went back to his roots with country & western music. Although, like Charlie Pride, he is something of an anomaly, he is nevertheless a majorstar, regularly hittingthe country charts. But forall this, Al has nevergiven up rock'n'roll, as anyone who was fortunate enough to see him during a recent visit to this country will testify - the vision of B ig Al beaming from ear to ear and pounding away at the piano is a memory to treasure! (Chris Woodford)

Obviously! Just observe his girth and over all build. I, however am referring to his musical prowess, not his physical stature. Al is big even though he hasn't sold millions and millions of albums yet, hasn't acquired Grammys yet, or achieved household name status yet. In the competitive music business world Al has big things going for him: his big voice, his big personality, his big stage presence, his big ability to create musical excitement, and that big big commodity he possesses called soul. Al's talent is so big that by comparison it dwarfs that of many of today's so called super stars. This album aptly titled 'Back To My Roots' is the fruition of a musical journey that began in America's heartland in the early 50's. Al penned all the songs which shows he has many other talents.

He spent his early years on a farm in rural Oklahoma. While a young teenager he and his family (10 brothers and 2 sisters) found a piano in a junkyard, salvaged it and began tinkering out his musical legacy. Radio broadcasts of the day served both as his inspiration and teacher. In a short time he had mastered the 'Licks' of black rythm and blues, favorites of the era. During this period he also developed a fondness for the Country Music heard on the Grand Ole Opry. He grew to love Country Music by working in the hayfields on the farm, loading semi-tractor trailers that came up from Texas and all they played was Country. This fusion of southern music as you will hear, accounts for the Big Al Downing style and sound. 'Back To My Roots' is also a major part of Al Downing's live shows. In the early years gaining work with bands required Al to imitate the stars of the day (Fats Domino, Ray Charles, Little Richard, Elvis, etc.). Al still does great impersanations of these stars in concert, along with parodies of today's biggest Country stars.

Over the years the Big Al Downing sound has touched just about every category of recorded music. Amazingly, doing so without selling out just to jump on the 'band wagon' of some fad or craze. In the 50's (down on the farm), in the 60's R&B soul ('You Never Miss Your Water' with Esther Phillips), in the 70's ('I'll Be Holding On') Disco Dance, in the 80's two Top Ten Country tunes ('Mr Jones', 'Touch Me') and now 'Back To My Roots' puts it all together. From the dance tune 'Sneaky Freaky People' to the bluesy 'I Always Come Back To Loving You' Al never strays far from the roots.The Big guy strikes again. He just keeps getting bigger and better. Q100 Radio, Southbridge, Ma. 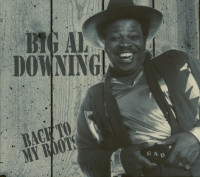 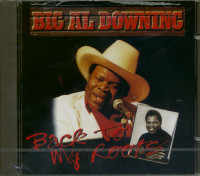