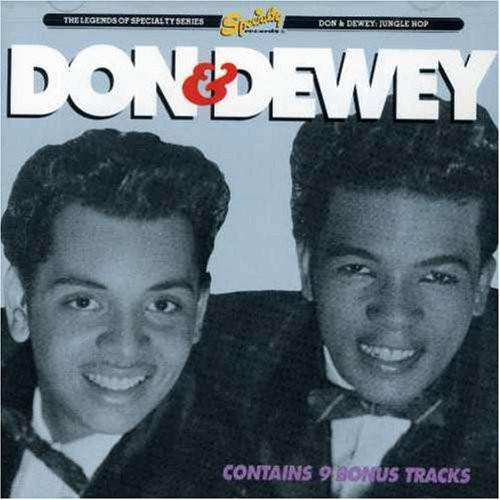 This article is deleted and can no longer be ordered!
Please inform me as soon as the product is available again.
P Secure bonuspoints now
Description
Learn more about DON & DEWEY
Review 0
Description
(1992/Specialty) 25 tracks. more
Close menu

Infinitely more influential than the chart books suggest, Don & Dewey embraced rock ‘n’ roll in all its tutti-frutti absurdity. As Jonny Whiteside wrote in L.A. Weekly: “When they weren't hollering, they spoke in wildly poetic, almost indecipherable tongues (langga langga oli-oki changa-chang). They did the jungle hop with the beeb-a-lee bop, mammer-jammered at the hootenanner and got clean for their mama's papa's sister's brother's uncle's crazy child -- the one with the champagne eyes. They did it all... [even] perfectly vocalized close-harmony ballads that anticipated the glories of mid-'60s soul with blueprint accuracy.“ Dewey Terry (born in Los Angeles, July 13, 1937) grew up hammering out boogie woogie on the family piano. He and Don Harris (born June 18, 1938 in Pasadena, California) worked their way through the L.A. vocal group scene, principally the Squires, before going out as a duo.

They were a sensation around town when Art Rupe signed them in 1957 (an early, slower version of Farmer John was recorded on October 21 that year). Dewey modeled his guitar playing on another Specialty act, Guitar Slim, and the duo was viewed by Specialty founder Art Rupe as a replacement for Little Richard, who had departed for the ministry (Terry told Whiteside that Rupe initially billed them as Two Little Richards). Don & Dewey’s following was almost exclusively non-black, as evidenced by those who revived their songs. Farmer John was a hit for east L.A. Chicano rockers, the Premiers, who took it where Don & Dewey didn’t...the charts. It was also popular in England, where it was recorded by the Searchers, and it later inspired an alternative country band, Farmer Not So John. It’s a matter of fact that the Righteous Brothers modeled their early act upon Don & Dewey and recorded Justine, Koko Joe, and Big Boy Pete (as had the Olympics, who took it to the charts).

In 1963, Dale & Grace topped the pop charts with Don & Dewey’s I’m Leaving It All Up To You, and the benighted duo of Donny & Marie Osmond took it to #4 in 1974. Feeling shortchanged by “You’re Cheatin’ Art“ Rupe, the duo picketed Specialty’s offices alongside Little Richard (with whom they toured England in 1964, opening their act with Farmer John), but the outcome of their industrial action is unknown. Don & Dewey split up in the 1960s, and Don Harris, who had perfected an early stab at rock violin, joined Frank Zappa for four albums and then John Mayall. The ghastly prog-rock group It’s A Beautiful Day featured a violin and later recorded a Don & Dewey tune that they titled Don And Dewey.