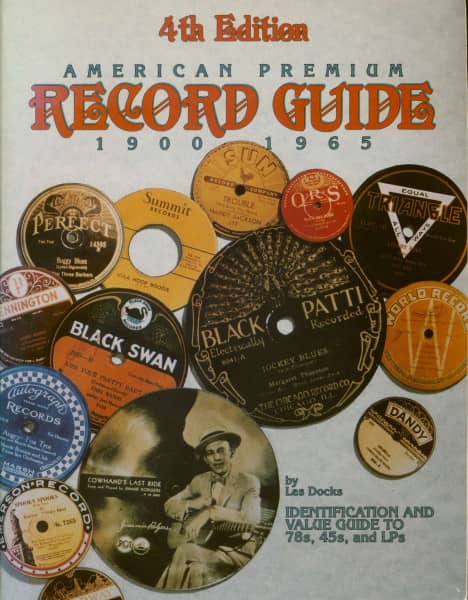 INTRODUCTION There is nothing "official" about this or any other price guide. It, like other books on collectibles reflects the opinions of the author, based upon lengthy experience buying selling and trading records, consulting countless auction lists, sales lists, record publications, discographies, record company promotional literature, and collectors' want lists. Also important are the contributions of those who have supplied information, opinions on pricing, and photographs.

Undoubtedly, many errors and omissions will be noted by knowledgeable collectors; it is hoped that these will be brought to my attention by writing to: L.R. DOCKS, P.O. Box 691035, San Antonio, Texas 78269. Here, in a single volume, are listed thousands of desirable records in the most widely collected categories: Jazz, Dance Bands, Celebrity, Blues, Rhythm and Blues, Country and Western, Hillbilly, Rockabilly, and Rock and Roll. Included are 78s, 45s, EPs, and LPs. Emphasis is given to categories heretofore neglected and/or inadequately treated, such as early jazz, blues and country 78s. As in previous editions, the majority of records listed are unfamiliar to non-collectors. Indeed, many are so obscure as to be unfamiliar even to sophisticated collectors.

Quick now: Who were Dubin's Dandies? Very few of the records listed are top-selling hits. This book is intended to be a guide to scarce, sought-after, and otherwise desirable discs that ought to be recognized as collectible. It is not meant to afford readers a "nostalgia trip," by listing thousands of familiar old favorites, complete with titles. (Those seeking documentation and information about hit, or "charted" records should consult other references, such as those by Joel Whitburn, listed in the Bibliography.) Those treasured (when was the first time they were dug out of the cellar and played?) records by Bing Crosby, Al Jolson, Glenn Miller, et al., even if they are indeed "originals" are probably not discs that are saleable to a knowledgeable collector, and certainly not at more than a nominal sum.

Common sense ought to suggest that records which sold in the largest quantities remain relatively common and inexpensive today. But common sense sometimes seems uncommon: "I have an original "White Christmas" by Bing Crosby; what will you give me for it?" Oh, well! I don't really expect to get many calls offering me a store stock of 8000 series Okeh records. Readers of previous editions will note, however, the inclusion this time of many more relatively common and inexpensive records, i.e. records valued at two to five dollars, by the more familiar artists, and on commonly found labels such as red Columbia. They may well ask, "Has Docks sold out?" The answer is a resounding "no."
Taschenbuch  461 pages Books Americana Inc.; 4th edition (Sep 1991) Englisch