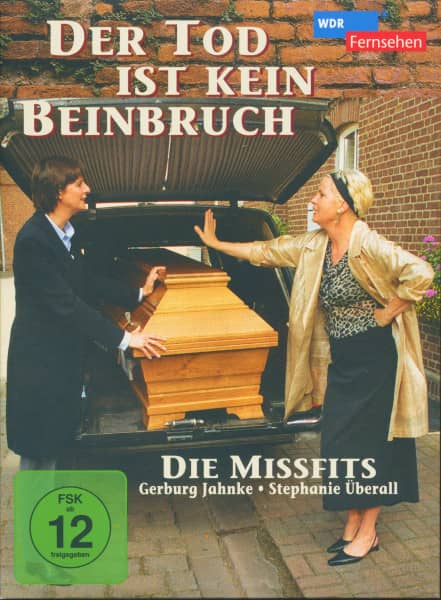 DVD with 20-page booklet, 6 chapters, 21 titles, colour, PAL, without country code, playing time approx. 180 minutes.
Der Tod ist kein Beinbruch' was a German TV series with the cabaret duo Missfits.
Six 30-minute episodes ran between November 2002 and January 2003.
The series was nominated for the Grimme Prize in 2003.
In the mini-series 'Der Tod ist kein Beinbruch' (Death isn't a broken leg), the craven and completely different sisters Mimi and Hilde inherit from their uncle Hubert a funeral parlour in Oberhausen. Unfortunately, the uncle has decreed in his will that the institute must be continued, otherwise the proceeds go to a non-profit association. The sisters - both chronically broke - accept the inheritance after careful consideration. The unconventional funeral service with heart and mouth, however, has a competitor. Undertaker Pelzer wishes Mimi and Hilde all the bad and waits only for their little institute to bless the temporal...
The Missfits were founded in 1985 by Stephanie Überall and Gerburg Jahnke and were among the most successful cabaret artists in the country, were frequently seen on WDR television, and sold out the country's largest theatre stages and halls. In their stage and CD programmes, the women embodied themselves and the artificial figures Elfriede Trockenpflaume (widow), Frau Lehmann-Brack and Frau Nölle (both teachers), as well as Cora von Ablaß-Krause (bestselling author). But the most famous figures were clearly Matta and Lisbett: two older ladies from Oberhausen, who have a funeral parlour and like to talk about 'fucking' and past relationships or the funeral of the last bandage.
Songs were one of the main parts of all programmes; with the anthem Oberhausen they set a monument to their homeland. The Missfits toured as a duo and with a band and bid farewell to the stage on their 200-concert 'Last Round' tour from 2004 to 2005. The duo was nominated for the Grimme Prize and awarded the most important genre prizes, including the Salzburger Stier, the Tegtmeier Ehrenpreis, and the Deutscher Kleinkunstpreis.
One of the most beautiful works that Mrs. Everywhere and I have ever been allowed to do for German television was the mini-series 'Der Tod ist kein Beinbruch', based on our misfit piece 'Wo niemand wartet'. Everything was right: authors, team, editor, locations, great colleagues and above all our two characters. Mimi, the overdressing life artist, and Hilde, her tidy sister. We would have liked to have filmed many more episodes - the characters and their surroundings (an old funeral home) would have given a lot of material - but the ways of the WDR are unfathomable. So it is all the more pleasing that you can now view our sinistres Six-Pack as a collection! How awesome!'
Mrs. Jahnke alias Mimi Decker.
"Death isn't a broken leg" on DVD. That's nice. I'm glad you did. A small, fine series. The shooting was fun. We've learned a lot. Thanks to a fantastic team and great colleagues. "Have fun with the cuckoo!
Stephanie wishes everywhere alias Hilde Neumann.