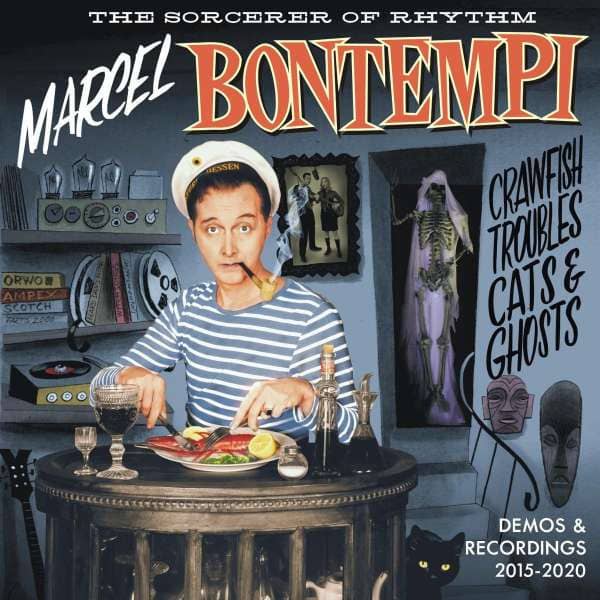 At this moment, most people in our retro scene have general knowledge and informed opinions about this strange musical alchemist known as Mr. Marcel Bontempi. His phenomenal career from the debut of 1960s beat band The Montesas in 1998 to his 'monster solo hit' of 2013 'Dig A Hole' has seen Marcel's star rise ever higher and his popular and clever recordings grabbed by an ever growing fan base. Live stage performances by Marcel & his girlfriend 'Friday', the lively Miss Ira Lee, and Marcel's own 'backwoods' gang, Dr Bontempi's Snake Oil Company, at clubs and festivals across Europe (and even Nashville and Las Vegas, USA! ) have rightly helped spread the Bontempi name around the world.

So here's the rhythm wizard's second compilation - packed with his 7" output (all limited and now sold out) from 2015 to 2021 and some unreleased songs and musical themes for plays, among others.

The vinyl comes in a gatefold cover with lots of info and photos and with an extra bonus 7" and unreleased material.

Marcel Bontempi - graphic artist, musician, professional youth! Marcel Bontempi, who lives in Gudensberg, is certainly known to many through bands like'The Montesas','Dr. Bontempi's Snake Oil Company' or through his musical solo projects, but more people may know him or his works as an artist. Whether cover, poster design, artwork or stage design - his versatility and wonderful works have made him an established figure in the field of rock'n'roll illustration for a long time.