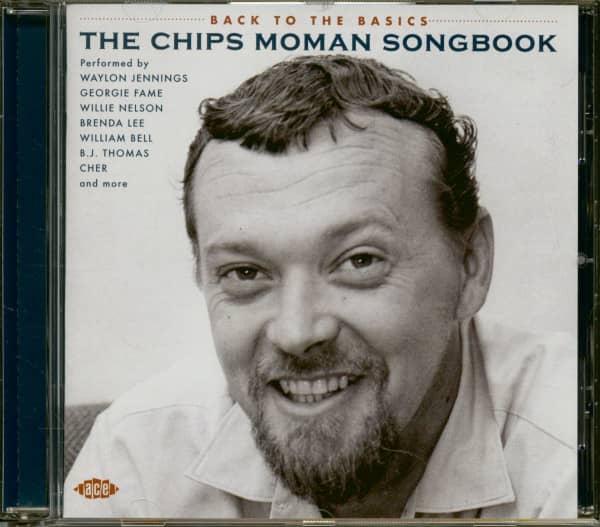 Various: For The Good Times - The Songs Of Kris Kristofferson (CD)

Ace’s Songwriter Series shines its spotlight this month on a man whose name will forever be associated with the Memphis music scene of the 60s and 70s. Lincoln Wayne “Chips” Moman was many things in his lifetime – musician, producer, songwriter, studio-owner and much more besides – and is well known and greatly admired for all of his musical accomplishments. His first published copyright brought him a Top 10 hit, and he helped facilitate the birth of Stax Records in the late 1950s when it was still a little label called Satellite operating from its founder Jim Stewart’s home in a small town outside Memphis. A decade later, he was owner-operator of American Studios, one of the most famous recording facilities in the world and one that attracted artists as renowned as Neil Diamond, Dusty Springfield, Dionne Warwick, Petula Clark and, most famously of all, Elvis Presley. Later still, he would work in Atlanta and Nashville with some of country music’s biggest names of the 70s, 80s and 90s. Somehow along the way he also found time to marry one of 60s New York’s finest songwriters, the great Toni Wine.

There never was a time in his adult life when Chips was not busy. His other roles gave him much less time to write songs than some who have featured in this series, but if the only one he had ever co-authored was ‘Dark End Of The Street’, his status as an all-time great songwriter would be assured. Working with colleagues such as Dan Penn, Bobby Emmons and wife Toni guaranteed that everything Chips co-wrote would be of the highest quality. The two-dozen songs on “Back To The Basics” do much more than merely qualify that statement.

The selections span the whole of Chips’ career as a songwriter. Early successes such as Troy Shondell’s ‘This Time’ and the Mar-Keys’ ‘Last Night’ (written with members of that band, and heard here in a vibrant version by Georgie Fame & the Blue Flames) rub shoulders with mid-60s triumphs including ‘Do Right Woman, Do Right Man’ (originally recorded by Aretha Franklin with the same musicians who back Cher on her excellent 1969 remake) and ‘Dark End Of The Street’ (here by the Gram Parsons-era Flying Burrito Bros, one of the first to record the song in the wake of James Carr’s immortal original).

Chart-topping 70s classics by B.J. Thomas – the artist with whom Chips enjoyed his longest professional relationship – and Waylon Jennings show Chips’ gravitation towards country music writing and production was not misguided. The calibre of his later country songs is defined by the artists who recorded them – Johnny Cash, Tammy Wynette, Brenda Lee, George Strait and Kenny Rogers, to name just a few.

As well as writing or co-writing all the songs here, Chips also produced more than two-thirds of the featured recordings, from the early Stax sides of the Vel-Tones (the label’s first ever 45), Carla Thomas, William Bell and more to the 80s recordings of Johhny Cash and Willie Nelson. As a celebration of Chips’ all-round talent, “Back To The Basics” is peerless. And as a celebration of four decades of songwriting, it honours the reputation and memory of one of the best. (Tony Rounce)

Article properties: Various: For The Good Times - The Songs Of Kris Kristofferson (CD)