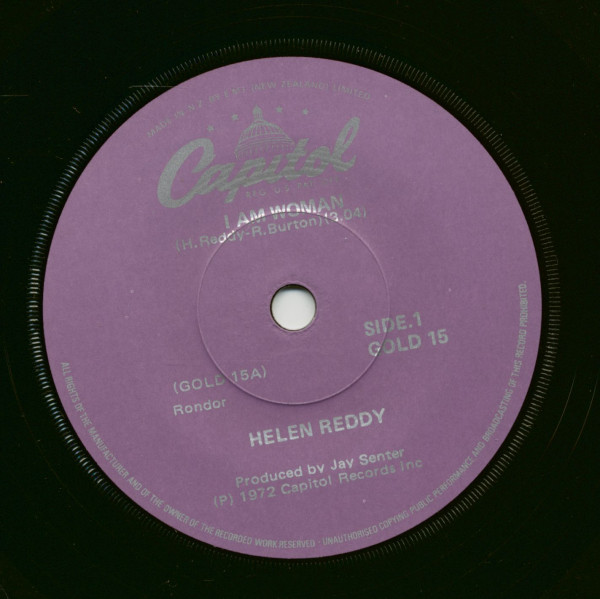 The world heard Helen Reddy roar in 1972. Her "I Am Woman" caught fire as a unifying statement of liberation and empowerment at a time when female equality- was rapidly advancing to the very forefront of social issues. Written by Reddy and Ray Burton, the record went gold and to the pop hit parade near year's end, making the Australian singer a full-tilt American star. And when she picked up her Grammy for "Best Pop Vocal Performance, Female" at the gala festivities (beating out high-powered divas Carly Simon, Aretha Franklin, Roberta Flack, and Barbra Streisand for the honor), Reddy gleefully raised a few stodgy eyebrows amongst the gathered industry elite by thanking her husband/manager Jeff Wald, Capitol Records, and "God, because She makes even-thing possible."

It wasn't a particularly short or easy journey to prolonged stardom for Helen. who was born October 25,1942 in Melbourne, Australia with show business blood coursing steadily through her veins. Her father, Max Reddy, and mother Stella Limond were popular Australian thrier• performers who played the vaudeville circuit and brought the little lass onstage with them at the Tivoli Theater in Perth when she was only five. Her folks taught I klen the fine points of comedy, and Reddy, singing and Glancing skills made her a full-time performer by age 15. A jars fan whose taste for American Rock and Roll was whetted when her folks brought some vinyl by Chuck Berry and Ray Charles back from a U.S. visit, Reddy regularly appeared on an Australian television program.

Melbourne Tonight, in 1958, and eventually hosted her own '60s 'IV show, Helen Reddy Sings, for the Australian Broadcasting Commission. "I wanted to be a star-rich and famous," Reddy told TV Guide's Dwight Whitney in 1973. "I knew I was going to be one. I'd seen those movies, everybody in the States had two cars and a refrigerator, and I was determined to go there."
A 1966 talent contest promised to provide Helen, fully punched ticket to America and its riches. She bozo out a reported 1358 competitors to take first prize, which was a trip to New York and an audition for a label (reportedly Mercury Records). Toting her three-year-old daughter Traci along on the long plane ride, Reddy was thunderstruck to learn that the firm wasn't at all interested in her talents. "The year I arrived was a bad year for women singers, the record company told me," she explained to Coruna, Jim Sheet, "I mean, seriously, have you ever heard of it being a 'bad year' for men singers: So I starved. I lived in a hotel so dreadful I can't even talk about it, with a small child, no money, no friends, no contacts., just a good voice that was unmarketable that year."

Helen sang wherever she could — an Irish bar on 14th Street, weddings, the Catskills, a nightclub gig in Montreal that just about paid her busfare both ways. Seriously considering throwing in the towel and heading back down under, Helen, newly made friends threw her a birthday party and contributed 5 bucks apiece toward her welfare. An uninvited guest that night changed Reddy's life forever. Jeff Wald was an up-and-coming agent at William Morris who believed in the young Australian chanteuse from the outset. With Wald determinedly knocking on doors in her behalf, Helen, career slowly picked up steam. She cut a 1968 single for Mercury, Fontana imprint, "Go" b/w "One Way Ticket," that was arranged by Arnold Goland, who did the same on Jay and The Americans' 65 smash -Cara Mia." It was her hubby Wald who finally found Helen, breakthrough vehicle and got it on the a, "Jeff decided 1 needed one thing to make people sit up —a hit song," Reddy told Coronet.

"He picked it I didn't even like 'I Don't Know How To Love Him,' but he seemed to know it was a winner and he made sure, with the most relentless hard work I've ever seen, that it became one." Culled from the score of the popular rock opera Jesus Christ Srperstar, "I Don't Know flow To Love Him" inaugurated a long and mutually profitable relationship between the couple and Hollywood-based Capitol Records as it climbed to #13 pop in early 1971 (its uplifting flip side, the Mac Davis-penned "I Believe In Music," would prove a hit for Gallery the next year). The resulting I Don't Know How To Love HMI album contained the first version of "1 Am Woman.. The anthem made tittle impact until it was inserted into the soundtrack of the film Stand Up And Be Counted, which starred the lovely Stella Stevens. I. re-emergence prompted Helen to recut the tune for single release, adding a third verse and altering its arrangement. "1 Arn Woman" made a small blip on the charts in June of '72, fell off for a spell, then came back with a vengeance that September, thanks in no small part to a pregnant Helen performing and promoting it everywhere she could. Reddy had her first number one loop hit that December.

An album of the same title, produced by Tom Catalano and arranged by Artie Butler, went gold and also sported her next hit, the #12 seller "Peacefiir (written by soft rock specialist Kenny Rankin), and a haunting rendition of Leon Russell's "This Masquerade." Though she certainly didn't sound like it, Tanya Tucker was only 13 years old when she broke through in 1972 with "Delta Dawn." Tucker's version was a country sensation but only made minor waves on the pop front leaving I Men to give it a pop spin and nail another million-selling chart-topper in mid-73 (co-writer La, Collins had been half of the maniacally rocking Collins Kids with his sister Lorne during the late '50s). "Delta Dawn" shared space on Helen, Catalano-produced Long Hard Climb album with the Adam Miller-penned 'The West Wrind Circus" and "Leave Me .Alone (Ruby Red Dress)," a Linda Laurie composition that prove, gold #3 smash in late '73. The diminutive and prolific Paul Williams was half the braintrust behind the intimate .1bu And Me Against The World," a #9 hit for Reddy in the summer of 1974. That WI, Helen nailed her last million-selling pop chart-topper with the mysterious, simmering saga of "Angie Baby'," from the pen of Alan O'Day (best-known for his own vaguely controversial number one hit in 1977, the vaguely controversial "Undercover .gel"). Reddy, fame spread into television and movies; she was installed as the mid-'70s host of NBC-T, weekly musicfest Midnight *dal, and her acting background served her well when she joined Charlton Reston, George Kennedy, and Karen Black on the big screen in Airport 75 (Reddy portraying the chipper Sister Ruth) and in the 1977 Disney musical 'Pete's Dragon'.

"Angie Baby" hailed from Helen's 'Free and Easy' album (which went gold) and was produced by Joe Wissert, who had previously supervised The Turtles, The Lovin' Spoonful, and Boz Scaggs. Wissert remain.' at the helm for Reddy, seductive '75 hit "Ain't No Way To Treat A Lady," the Harriet Schack comimrsition benefitting from a slinks, Nick DeCaro arrangement and sailing to #8.1 Can, Hear You No More," a #29 seller for Helen in the summer of '76, was a Gerry Goffin/Carole King copyright introduced by Chicago soulstress Betty Everett in 1964.

It hailed from Reddy's Wissert-supervised Music, Music, yet another gold album that also featured "Get Off Me Baby" Helen's 78 LP lire Sing in The Sunshine was produced De am and Hollywood cult figure Kim Fowl, who had recently mastermind.' the ascent of the hard-rocking all-female RtIlla Way, I. tide trade was a 1964 smash for New 1-thland-born folk singer Gale Garnett. Helen briefly forayed into disco the next year with "Make Love To Me." Helen Reddy continues to perform her hits in concert, her crucial role in the rise and acceptance of women, liberation duly noted.
- by Bill Dahl