P Secure bonuspoints now
Description
Learn more about J.B. Hutto
Review 0
Description
(2015/Delmark) 18 tracks. At the time these studio recordings were made you could hear the rough... more
Close menu

(2015/Delmark) 18 tracks. At the time these studio recordings were made you could hear the rough and rowdy blues at Turner's Blue Lounge at 39th and Indiana. Producer Bob Koester captured the raw slide guitar sound of Hutto in these explosive sessions. J.B.Hutto tears the joint up along with Sunnyland Slim - piano,organ, and Lee Jackson - guitar. Highly recommended classsic from Chicago's southside.

Elmore James left a wave of slide-wielding disciples in his Chicago wake. That's where J.B. Hutto made his stand, in the smoky, sweaty West Side neighborhood taverns where the blues flourished. "Slide's been my game," said the late Hutto. "I mean, I like finger notes, finger works too. But I like that slide cryin' to me."

Hailing originally from Blackville, South Carolina on April 26, 1926 but mostly raised in Augusta, Georgia, Joseph Benjamin Hutto's dad was a preacher, and J.B. sang gospel in his family's group, The Golden Crowns. When his father died in 1949, the Huttos migrated to Chicago. J.B. backslid into the blues, initially playing drums with Johnny Ferguson & The Twisters before switching to fret-melting slide axe.

"I didn't have any idols," Hutto said. "But I liked Elmore, Muddy Waters, them kind of cats, 'cause they had a slide. I was kind of into the slide thing, you know, trying to get myself together on it." J.B. assembled a band he called The Hawks: Joe Custom on bottom-heavy second guitar, harpist 'Earring' George Mayweather, and Eddie 'Porkchop' Hines doubling on drums and washboard.

"These boys were around," said Hutto. "We knew each other, anyway. And we decided we'd try to come up with something. And we come up with the Hawks." One night either Chance Records boss Art Sheridan or second-in-command Ewart Abner checked the Hawks out. "I was working on Madison Street, the Globetrotter Lounge," said J.B. "And his office wasn't a block down the street from where I was working at at that time. I guess he heard it and liked it. So he come in and had me come to his office. We talked about it and come up with a record."

Hutto laid down four tracks at his debut date for Chance, which issued Now She's Gone and Combination Boogie as his first single. The slashing Pet Cream Man was half of his encore. "I've been writing numbers ever since I've been beating on a guitar. I mean, I don't expect for 'em to go nowhere, but I write 'em anyway.

A follow-up Chance session produced a last Hutto single, and then the slide wizard didn't record for 11 years. By 1965 J.B. was a regular at Turner's Blue Lounge on the South Side, generating enough buzz to be included on Vanguard's 'Chicago/The Blues/Today!' series. Hutto made his own fine Testament LP in '66, but it was 'Hawk Squat,' his 1968 Delmark album, that really put him on the map.

"I met Bob (Koester) down in Turner's. And he must have liked it. At that time, I was about changing up, working with different people," he said. "We got together, we talked about cuttin' records. At that time, he had a small company. He wasn't quite as large as he was. I told him, 'Yeah, we'll try to do it!'"

Fez-wearing J.B., a raucously extroverted onstage performer, moved to Massachusetts in 1979, putting together the New Hawks and continuing to rock houses until he died back in Harvey, Illinois on June 12, 1983. 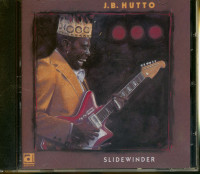 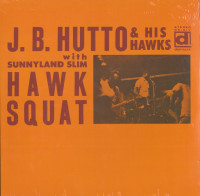