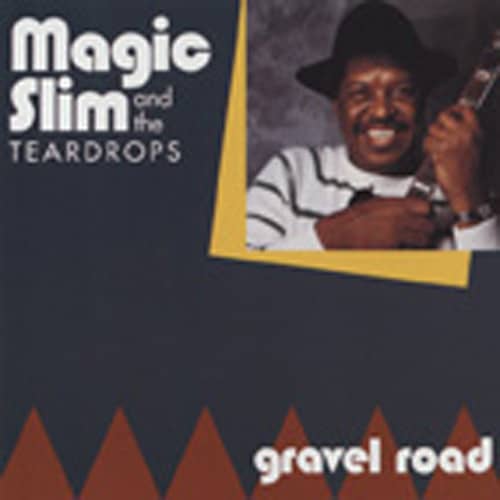 Please inform me as soon as the product is available again.
$16.91 *

Magic Slim was born Morris Holt in Torrence, Mississippi, on August 7, 1937. He took an early interest in music, singing in the church choir, and fashioning a guitar for himself with baling wire from a broom, which he nailed to the wall. "Mama whooped me for that," recalls Slim. His first love was the piano, but having lost the little finger on his right hand in a cotton gin accident he found it difficult to play properly. Undaunted, he simply switched to guitar, working in the cotton fields during the week and playing the blues at house parties on weekends.

When he was 11, Holt moved to Grenada, Mississippi, where he met and became friends with Magic Sam, who gave him a few pointers on guitar. Slim recalls, "We used to sit up under the tree Sunday afternoons and play our little acoustic guitars. Magic Sam told me don't try to play like him, don't try to play like nobody. Get a sound of your own." And that he did - a trademark guitar tone, featuring the meanest vibrato in blues, coupled with the raw, earthy power in his vocals.

Years later the two would hook up again in Chicago, where Sam would have a major influence on Slim's career. When Slim made his first trip to Chicago in 1955, Sam offered his friend encouragement, letting Slim play bass in his band and even giving the then lanky Magic Slim his nickname. But Slim found it rough going on the highly competitive blues scene and returned, discouraged, to Mississippi to perfect his craft. Demonstrating his characteristic determination, Slim spent the next five years practicing guitar and teaching his younger brothers, Nick and Douglas (Lee Baby) to play bass and drums respectively.

Confident in his abilities, Slim returned to Chicago and established himself as a formidable player on the scene. In 1967, Slim put his own band together called the Teardrops, which included his younger brothers. In 1972, he began playing regularly at a tiny South Side club called Florence's, initially filling in for Hound Dog Taylor on occasion, and eventually taking over the gig when Hound Dog left the club for a safer and more lucrative career on the road. Slim's aggressive, boisterous style was the perfect compliment to the often rowdy atmosphere at Florence's.

In the mid-70's Slim began to hit his stride as a guitarist, performer, bandleader, and recording artist, launching a career that has taken him across the country and overseas to national and international recognition and acclaim. He began touring Europe, where his rough and tumble authenticity was well appreciated. Today he's one of the most sought-after headliners for festivals in the U.K., Poland, Scandinavia, France, Holland, Belgium, and Greece. By the late 80's he was also touring Japan and South America. On his first trip to Brazil in 1989, he became an instant hero, appearing on television, in a dozen magazine articles and every major newspaper in the country. The press said he stole the show from the likes of Buddy Guy, Etta James, and Albert Collins. He's returned several times to Brazil, easily selling out all venues. Slim's live shows are so electrifying that Eddie Vetter invited Slim to open Pearl Jam's concert in Chicago after catching the Teardrops' performance at a local nightclub.

Slim's recording career began with the 1966 recording of the song "Scufflin'," followed by a number of singles in the mid-70's. He recorded his first album in 1977, Born Under A Bad Sign, for the French MCM label. During the 80's, Slim released titles on Alligator, Rooster Blues and Wolf Records and won his first W.C. Handy Award.

Slim's first album on Blind Pig Records, Gravel Road, was released in 1990. Its title track was one of the first tunes he learned to play on his baling wire guitar in Mississippi. The album was well received by the press, garnering a passel of glowing reviews and landing on several year-end Top 10 lists.Billboard magazine said, "The well-traveled Chicago blues singer/guitarist is near the top of his form on this delightful album, which comes close to capturing the late-night ambiance of Slim's live set."

In 1996, Slim's career came full-circle with the release of Scufflin' on Blind Pig, the title track being a remake of the song which began his recording career thirty years earlier. Living Blues said the album "should bring a smile to the face of even the most jaded listener." 1998's Black Tornado was released to similar accolades in both the blues and mainstream press. AnAssociated Press review noted that "Magic Slim has never been better than onBlack Tornado and that is a lot to say." Downbeat called Slim "a true all star; a guitarist of considerable authority whose lines snap like a crocodile's mighty jaw and a singer with a persuasive capacity for wrenching every bit of emotion out of his lyrics."

Snakebite, Slim's fourth album for Blind Pig Records, was released in 2000. Critical reaction was typified by this quote in Jazz & Blues Report: "Slim sings and plays at a level that makes this among the best albums in a career spanning over three decades." On Blue Magic, his 2002 release on Blind Pig Records, Magic Slim paired up with New York postmodern blues producer Popa Chubby to conjure up some raw, rocking blues magic. Recorded in Blind Pig's vintage Chicago warehouse, where the high ceilings, wooden floors, and brick walls provided the perfect setting to capture Slim's raw industrial sound, was probably Slim's most relaxed and enjoyable studio experience to date. The project landed Slim and Popa on the cover of Blues Revue magazine with a lengthy feature article extolling their collaboration: "This may indeed be on of the best-produced blues albums you'll hear this year."

In 2003 Magic Slim and the Teardrops were officially recognized as the finest blues band in the land when they won the coveted Blues Music Award as "Blues Band Of The Year." It was the sixth time Slim has won a Blues Music Award, considered the highest honor in the blues field.

In 2005, the Teardrops' live show was documented on 2005's Anything Can Happen, a joint CD/DVD release. The DVD and live album capture all the elements of a Magic Slim show as described in Blues Revue: "Each Teardrops performance is underpinned by a massive groove - irresistibly punishing shuffles, slow numbers drawn from deep in the heart of the blues. Slim's singing is commanding yet nuanced; his huge, earthy, wet voice is one of the best in the genre."

When word got out in 2008 that Magic Slim was looking for a few guest Teardrops, the Chicago rhythm & blues community responded with a resounding "Yeah!" The result was Midnight Blues. Joining Slim and the Teardrops on this incredible set of real Chicago Blues with a dash of Country and a bit of Soul thrown in were James Cotton, Lil' Ed, Lonnie Brooks, Otis Clay, Gene Barge, the Chicago Rhythm & Blues Kings and Elvin Bishop.

The camaraderie and stylistic variety - as well as the sheer exuberance of Slim's playing and singing -- made Midnight Blues unique in Slim's substantial body of work.