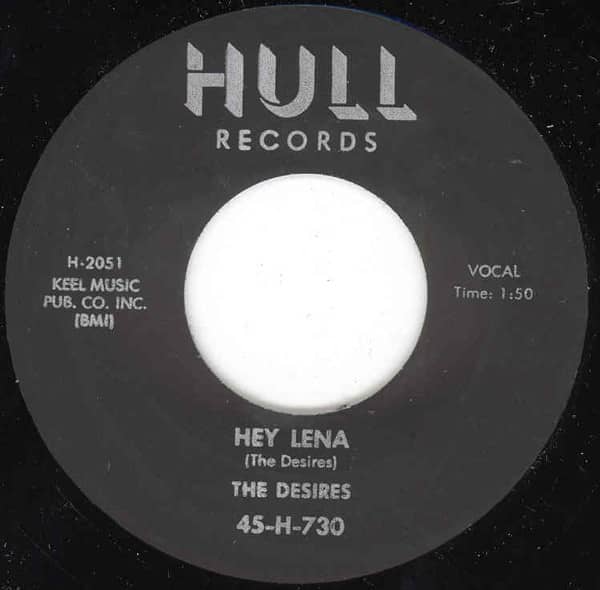 Desires: Hey Lena - Let It Be You

Doo Wop Jiver with nice ballad on the flip.

Article properties: Desires: Hey Lena - Let It Be You

Learn more about Desires
The Desires Rendezvous With You Considering four of them were attending various high... more
Close menu
"Desires"

Considering four of them were attending various high schools in New York City, it made perfect sense that this group started out calling themselves The Students. Alas, there was already another group doing business by that handle (see our 1958 disc for their I'm So Young), so they switched their handle to The Desires.

Lead Robert 'Bootsie' White, tenor Charles Hirston, baritone George Smith, and bass Charles Powell were joined by Rochester, New York import Jim Whittier on the other tenor (he'd previously been with The Jivetones). Eddie Jones of The Demens was their vocal coach, and with the aid of manager James Dailey, they got a deal with Bea Kaslin's Hull Records.

Let It Please Be You, The Desires' group-generated 1959 Hull ballad debut, found Bootsie in a sky-high tenor zone, and he didn't drop his Frankie Lymon-esque range any on the jumping flip, Hey Lena, another collaboration by the whole group. The A-side's East Coast popularity won them a 1960 encore, and Bootsie's youthful pipes didn't drop any on the delightful New York-style jump Rendezvous With You. Four Desires were down as composers; all five wrote the smooth ballad flip, Set Me Free (My Darling). The Desires' third Hull single was canceled, and they broke up in 1961.