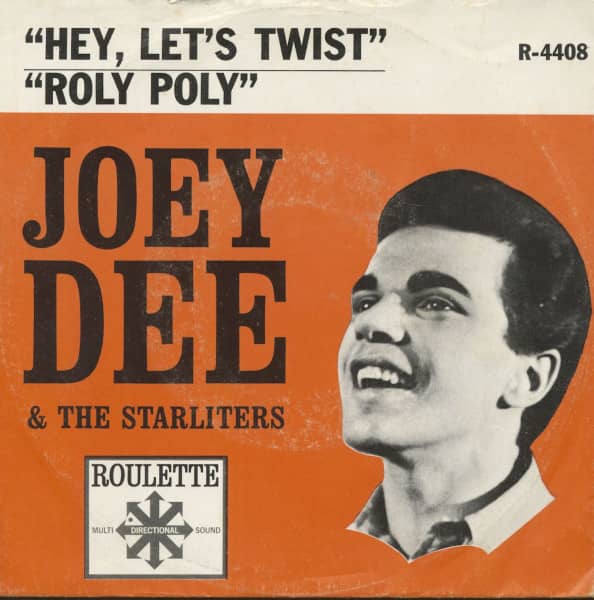 Please inform me as soon as the product is available again.
$16.85 *

Joey Dee
Joey Dee (real name: Joseph Di Nicola) was born in Passaic, New Jersey on June 11, 1940, as the youngest of ten children. When a mere youngster of eight, he taught himself to play the harmonica, and began singing in the local Church Choir. When in High School, he mastered the clarinet, an instrument he borrowed from his sister - another musical Di Nicola, who played in the School Band. A few months later, little Joey considered himself ripe enough to take a further step; he organized his own Combo and did well at private parties and School-dances. When the altosaxophonist left the group, young Mr. Dee took over his chair and he's been blowing the alto ever since. Originally, Joey Dee's big goal was to become a history teacher. Every dime he made as a Bandleader went into his studies. But bookings got bigger and better, and since the large Di Nicola family could certainly use the money, Joey decided to make music his profession.

The choice was a wise one: in 1960, Joey Dee & The Starliters (for that was the name he gave his group) were hired by an obscure Manhattan West Side boite, "The Peppermint Lour1ge". And that's were it all began: the career of Joey Dee - his Starliters - and ... The Twist ! October 1961: the "Peppermint Lounge" - audience is becoming more and more excited about a handsome looking kid, singing and shaking and shouting in front of his fierce little Band. The public catches on quickly - takes over the floor and copies Mr. Dee and his men. The Twist is born, and catching on like wildfire, and spreading all over New York, all over the U.S.A., and (later) all over the World. Teenagers in bluejeans and High Society bluebloods, Ivy Leaguers, Junior Leaguers and Little Leaguers and just plain Mr. and Mrs. America - everybody is doing the Twist. And "The Peppermint Lounge" is making more headlines than the Taj Mahal ! Since that explosive beginning, Joey Dee is making himself an astonishing career.

He is cutting records for ROULETTE, he appears on the Ed Sullivan Show, the Dick Clark Show, he stars in the Paramount picture "Hey, Let's Twist" and in the Columbia flicker "Two Tickets To Paris". He is a guest performer in New York's Hotel Plaza, in the "Four Seasons" restaurant and in another Hotel of worldwide fame: The Astor, where New York's major Robert Wagner immediately becomes a fan. A replica "Peppermint Lounge" is built in Miami Beach, and there too, Joey Dee & The Starliters score huge triumphs. He goes to Europe, and becomes a wild smash in the Scandinavian countries and in the "Starclub", Hamburg. Joey Dee is in ! Joey Dee is made !

His hottest records until now, have been "Peppermint Twist" and "Ya Ya" - both originally waxed for his L. P. Album "Damn' The Twist At The Peppermint Lounge" (ROULETTE MGRL 9411). He won a Gold Record for all three as well as a very special European award for his "Ya Ya" etching: Radio Luxem-burg's Lion. On this L.P. you will hear him as a fine, enthusiastic singer, a real Mister Twister, leading his Starliters with plenty of vigor and vitality and blowing an occasional saxophone solo. Moreover, Joey is a swell kid with about the pleasantest smile in the world.

A young smile - for his music is that of youth on the go !