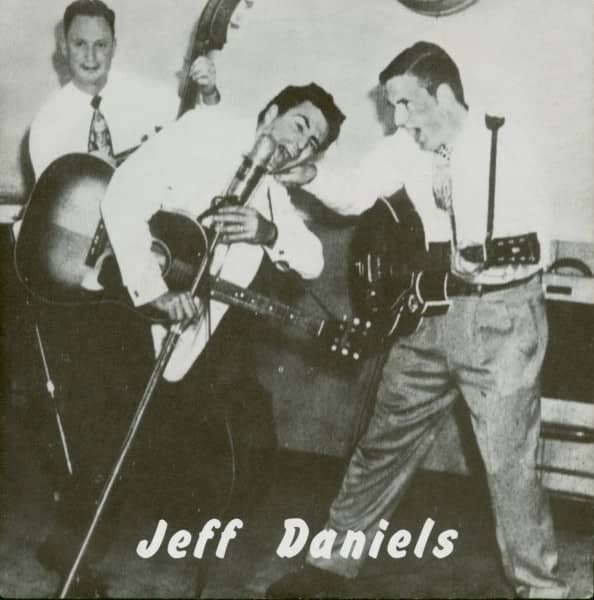 (1987/Hydra) 5 tracks - new store copy (cover has minimal storage wear)
& ,-
Jeff Daniels,whose real name is Luke Mc Daniel ,came into contact with country music in his early childhood. As his first hillbilly songs and bbogies appeared on "TRUMPET" and "KING", he already was a welcome guest in the "Grand Ole Opry".
In 1955 he wrote "Midnight Shift" using the pseudonym Earl Lee.The co-writer Jimmy Ainsworth was Luke's friend Jimmy Rodgers. These pseudonyms were necessary,because at that time he had a contract as author with "Acuff Rose Publishing".
Although it was originally written as a country song,the "Acetat" demo was already recorded in rockabilly style. He brought it to Buddy Killen who passed it on to Buddy Holly. He recorded "Go Ahead Baby" and
"Uh Babe "accompaniedby his own band,during his first session for "SUN" in Memphis in September 1956.
0n the 6.January 1957 the second recording session took part,but this time he was joined by the "SUN" musicians Roland James,Clayton Perkins,Jerry Lee Lewis and W.S.Holland.
The first disc (SUN 620) was released in 1976, because the recording didn't meet Sam C.Phillips taste.
After the contract was cancelled, Jeff Daniels went to "ASTRO RECORDS" where he made his first version of "Foxy Dan". In Angie , Louisiana, Jeff recorded 5 singles directed by Mac Kennedy and B.J.Johnson,for the
"BIG HOWDY" label .
After further recordings for "MELADEE" and "VENUS" he remained in the business till into th 8o's.