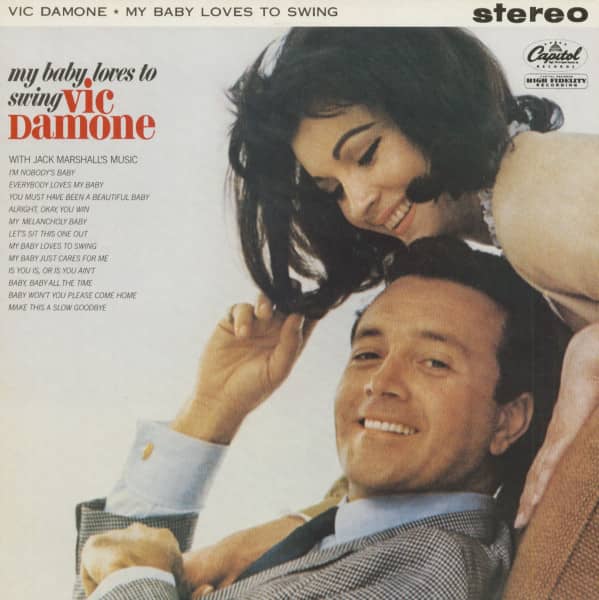 The Vic Damone Story begins in Brooklyn, N.Y. on June 12, 1928. He was born Vito Farinola, but he took his mother's name Damone when he entered the entertainment profession. From his earliest childhood Vic was surrounded by love and music. His mother was a piano teacher, and his father played the guitar. He learned to sing "You're Driving Me Crazy" at the age of two, singing to his father's accompaniment. While attending high school, Vic worked as an usher at the New York Paramount Theatre, the mecca of big bands and singing stars. Vic dreamed of the day when he too would sing on stage. One day Perry Como heard him singing in an elevator and encouraged him to study and make singing his career. Years later they became such good friends that Vic's son was named Perry, and Como the boy's godfather. Life has held many surprises for Vic, and the element of fate played an important role in his career. Shortly before his 18th birthday he was acclaimed winner of the popular Arthur Godfrey's "Talent Scouts" program on CBS. As fate would have it, comedian Milton Berle was backstage at the time. He was so impressed with the young man that he extended a helping hand — helping him land an engagement at a top New York nightclub — La Martinique. He was so well received at La Martinique that he was signed to his own radio series on WHN in New York, and within a matter of months was back at the New York Para-mount, but this time as singing star of the show, backed by Stan Kenton's orchestra. His next step up the entertainment ladder was recording. His hits starting in 1947 included "I Have But One Heart," "You're Breaking My Heart," and a dozen others. So, there we have a young singer, under 20 years of age, scoring on records, night club appearances, radio and TV. The next step was motion pictures. The first film was a star-ring role in "Rich, Young And Pretty." More movies followed — "Hell To Eternity," "Athena," and "Deep In Your Heart," and then, just as he was slated for the lead in at least three more pictures with superstardom in his grasp, along came the United States Army where he served for two years. Upon his honorable discharge from military service overseas, Vic made several movies — "Kismet," "Crash Boat," and "Hit The Deck." But he missed singing to a live audience. He missed the intimacy of appearing in night clubs, so he returned to clubs and concerts touring from coast-to-coast. Vic's personal life has been filled with love arid tragedy. While he prefers not to discuss his three unhappy marriages, he does enjoy talking about his lovely daughters—Victoria, Andrea, and Daniella who live with him in Houston, Texas. His son Perry resides in California. Currently, Vic Damone is achieving sustained success internationally in night clubs, concerts and TV guest appearances. His concerts throughout the United States, Great Britain, and Australia have established records in the field. In 1981, for the first time, the British Broadcasting Company (BBC) sponsored an American singer in concert. He was presented in famed Prince.Albert Hall in London, and The Dome, in Brighton. He sang before SRO audiences and the concerts were broadcast nationally over BBC. It seems that the British have taken Damone to heart so that his annual concerts are the talk of the British Isles. His 14 concert series in February, 1984 surpassed even his earlier successes. In its smoothness and sensitivity, Mr. Damone's warm lyric baritone comes closer to the velvet, even toned romanticism of the young Frank Sinatra than the voice of any other crooner who grew up in Mr. Sinatra's shadow. In fact, Frank himself once called Vic "the singer with the best vocal equipment in the business.