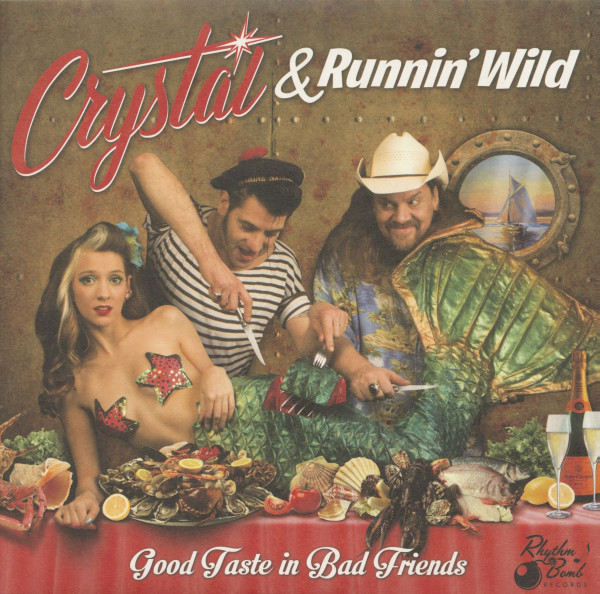 (2015/Rhythm Bomb Records) 12 tracks, Probably the best crossover stuff I've ever listened to! Crystal & Runnin' Wild are from Belgium and play a mixture of Rock 'n' Roll, Rhythm 'n' Blues, Country and some folky elements! No typically Rockabilly clichees are served here but it's a fantastic Rock 'n' Roll album all the way! If I shall name a so called 'sound-a-like' I'd name the Hillbilly Moon Explosion! Highly recommended and something for everybody who'd like to take a look over the typical classical Rock 'n' Roll and Rockabilly borders! nf - Bear Family Records

Born in Brussels, Crystal Dawn grew up surrounded by Country, Soul, Doo Wop, Rock’n’Roll and especially Rockabilly music. Only 16, she already shared the stage with Runnin’ Wild, her dad Patrick Ouchêne’s Rockabilly band, consisting of Johnny Trash (drum/vox) and Dan Black Wolf (double bass), that at that time was already touring Europe for 20 years with their unique Roots/Rockabilly sound.

But they decided to support the promising young talent that is Crystal. Crystal & Runnin’ Wild was immediately invited to play the rootscircuit of Belgium, Germany, Holland, Spain, France, Italy, Finland and even Russia.
One of the highlights was Brussels Summer Festival 2013, where they played in front of a 5000 men strong audience, and where Crystal caught the attention of one Steve McKay (of Iggy & The Stooges fame), who was very charmed by her version of their Punk classic ’Search And Destroy’. McKay fraternized and jammed with the band.

In April 2013 Crystal & Runnin’ Wild won the Belgian chapter of the ''Hard Rock Rising'' concours, an international Rock concours organized by the Hard Rock Café chain. That resulted in a first release, being a 6-song EP (2014). One year later the first full CD ’Good Taste In bad Friends’ is released by the German Rhythm Bomb label. The band is flown to the States to present their album at the Viva Las Vegas festival, in… wait for it… Las Vegas on April 3, 2015. Meanwhile the band is joined by American steel guitarist Thomas Beardslee. Together they present a strong contemporary Roots-Rock’n’Roll sound, carried by Crystal’s rocking voice.