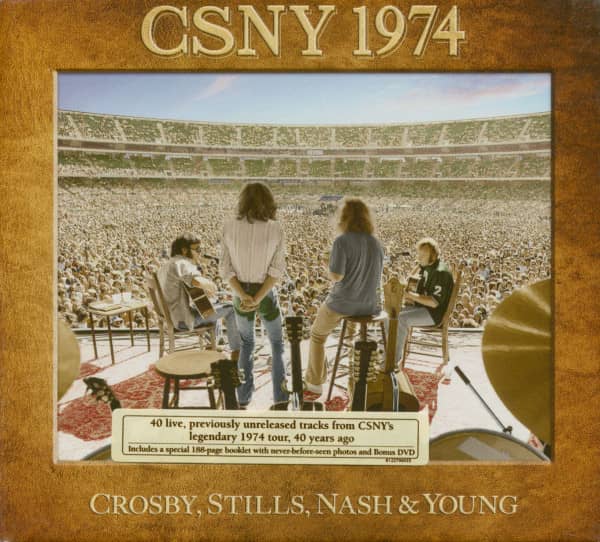 Please inform me as soon as the product is available again.
$59.31 *

The rumour mill has been boiling for a long time, now David Crosby, Stephen Stills, Graham Nash and Neil Young have confirmed the release of the long awaited box of their legendary live tour from the summer of 1974. The total package of CSNY 1974 consists of 40 previously unreleased recordings, which were recorded during the tour almost exactly 40 years ago, and will be released on July 4, 2014.

The box is available as 3CD/DVDs package or as pure Audio Blu-Ray (192kHz / 24-bit) plus DVD and comes with a 188(!)-page booklet with previously unreleased tour photos. The DVDs also contain unreleased concert footage. In 1974 Crosby, Stills, Nash & Young spent more than two months on the stages of the US open-air stadiums and gave a total of 31 concerts in 24 cities.

Over a million fans cheered on the fascinating chemistry of their vocal harmonies and interplay, which are unique and legendary in music history. Produced by Graham Nash and Joel Bernstein, the box reproduces the brilliant flow of their set, which began acoustically, continued electrically and finally ended acoustically. The band consistently followed this structure, so that the box reflects an exemplary concert of the tour.

CSNY 1974 presents some of the best and most famous songs of the formation, such as Suite: Judy Blue Eyes , Helpless , Wooden Ships and Teach Your Children. During the tour Crosby, Stills, Nash & Young also presented some of the then brand new songs that were later released on various solo albums. These include Crosby's Time After Time, Nash's Fieldworker and Stills' First Things First. There are also some songs by Neil Young that have remained unreleased to this day: Traces, Love / Art Blues, Goodbye Dick and Hawaiian Sunrise.

CSNY 1974 (3CD & Bonus DVD) - Box with 40 audio tracks on 3 CDs, a bonus DVD with 8 previously unreleased, restored video performances from the archive and a 188-page booklet.