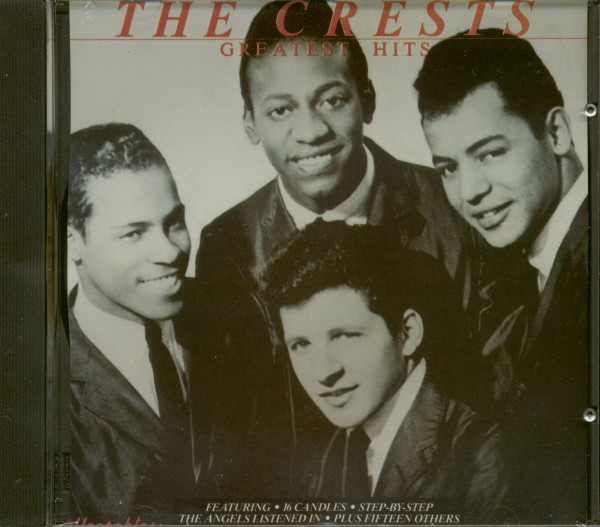 This article is deleted and can no longer be ordered!
Please inform me as soon as the product is available again.
P Secure bonuspoints now
Description
Learn more about The Crests
Review 0
Description
(Collectables) 18 tracks  - Relatively few 1950's vocal groups are fortunate enough to be... more
Close menu

(Collectables) 18 tracks
-
Relatively few 1950's vocal groups are fortunate enough to be remembered nearly 25 years after their rise to popularity, but such is the case for Johnny Maestro and the Crests. So talented and successful were the Crests that their late fifties records like 16 Candles, The Angels Listened In and Step By Step are still a part of every radio station's oldies programming.

The Crests story began in 1956 on New York City's lower East side when foUr Black youth, J.T. Carter, Talmadge Gough, Harold Torres and Patricia Van Dross teamed up with a young White lead named Johnny Mastroangelo. After singing together for about a year, the group's first break came in 1957 when they signed with Al Browne's 'Joyce' label. The Crests' first record, My Juanita backed with Sweetest One was moderately popular in the New York area but in no way approached the success of the group's later records. After an unsuccessful second release on Joyce, the Crests signed with the COED label in 1958.

By this time; Pat Van Dross, the only female in the group, decided to give up singing, leaving just the four young men, The Crests' first release for COED, Pretty Little Angel was by no means the national hit the group was looking for but it received enough attention to warrant a second COED release by the Crests. That second release was 16 Candles, one of the most popular rock & roll ballads of all time. Much of the success of "16 Candles" must be credited to Dick Clark who gave the record extensive play on American Bandstand.

With the popularity of 16 Candles the Crests soon found themselves making TV appearances and touring with the biggest name acts in the country. Over the next three years, hit followed hit for the Crests. Songs like Six Nights A Week, Flower of Love, The Angels Listened In, A Year Ago Tonight, Step By Step, Gee, and Trouble in Paradise kept the group at the top of the charts and in constant demand for public appearances. Late in 1960, following the release of Journey of Love and a couple of successful records, Johnny Maestro and Crests broke up. Johnny Maestro, being groomed by COED as a solo artist struck out on his own.

After several years of solo releases for a variety of labels, Johnny resurfaced in 1968 as the lead of the popular vocal group Brooklyn Bridge. The remaining Crests continued recording until 1964, when they called it quits. This album captures the magic of the golden years for Johnny Maestro and the Crests.

Learn more about The Crests
The Crests Step By Step Johnny Maestro and his Crests had a good thing going at Coed... more
Close menu
"The Crests"

Johnny Maestro and his Crests had a good thing going at Coed Records. Co-owner George Paxton was a music publisher whose output displayed a polish that a lot of New York indies lacked. The Crests had been Coed's flagship group since their 16 Candles just missed topping the pop hit parade (you'll find it on our 1958 edition).

Maestro's powerhouse leads and the harmonies of second tenor Tommy Gough, baritone Harold Torres, and bass J.T. Carter ensured that the multi-ethnic Crests kept posting hits: Six Nights A Week, Flower Of Love, and The Angels Listened In in 1959 alone. Step By Step, written by house songsmiths Ollie Jones (a former member of The Ravens and Cues) and Billy Dawn Smith, sailed to #14 pop in the spring of '60 with Gee (But I'd Give The World) residing on the opposite side.

"That got us back up in the Top Ten again," said the late Maestro. "It was a good song." Coed spared no expense. "That was great. The sound was phenomenal, the first time being there in the studio with live strings. A beautiful sound." Paxton's studio demeanor was calm. "He was kind of laidback. He never really had much to say. It was mostly the arrangers who had most of the say in the recordings. He'd throw his two cents in once in a while. He'd always be there, of course. But Bert Keyes and Billy Dawn, they were very instrumental in all of our recordings."

Between Step By Step and its Top 20 followup Trouble In Paradise, The Crests were flying high. But trouble loomed on the horizon. "'Trouble In Paradise,' I think, was the beginning of the end for the Crests,” said Maestro. "The record company told us that sales started diminishing because of the integration of the group, and they felt that we couldn't get any national exposure on national TV because of that. So they made the decision to start recording us separately - me as a soloist, and the group with another singer. We were young, we just really had no say-so in anything. And they kind of told us to what to do, so we just followed them and figured they knew what they knew what they were talking about.”

Maestro became a solo at Coed, nailing three 1961 hits. But he wasn't happy. "Being with a group all my life - all my vocal life, anyway - I was really used to being with the group in the studio and onstage. I had that support," he said. "So after a couple of records, I left the record company and just started traveling around the country with a band." Meanwhile, The Crests soldiered on without him. Maestro was singing with The Del-Satins, Dion's vocal group on Runaround Sue, but they wanted a bigger sound. They merged in 1966 with a horn band called The Rhythm Method. A new name was in order for the 11-piece outfit. "Someone at our manager's office made a comment, 'It's gonna be easier to sell the Brooklyn Bridge than sell a group of this size!'" laughed Johnny.

Buddah Records boss Neil Bogart wanted The Brooklyn Bridge to go bubblegum, but Maestro had heard a Jimmy Webb composition on a 5th Dimension album. "I said, 'This is a great song. I think we should arrange it our way and go into the studio,'" he said.The Brooklyn Bridge's Wes Farrell-produced rendition of Worst That Could Happen went gold in early '69, soaring to #3 pop. They scored lesser hits through 1970 and were still going strong when Maestro died March 24, 2010. 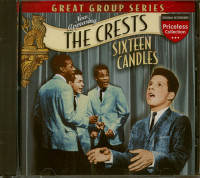 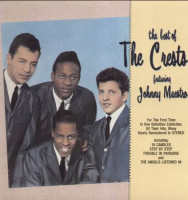