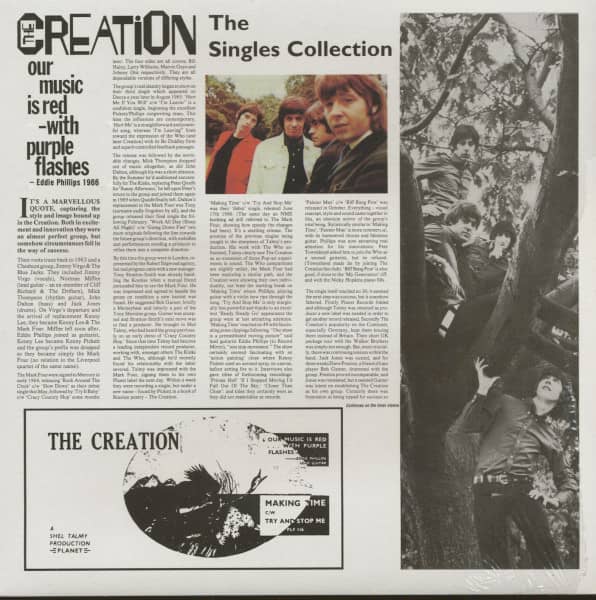 Please inform me as soon as the product is available again.
$20.28 *

P Secure bonuspoints now
Description Review 0
Description
(Get Back) 12 tracks, recorded between 1966 and 1968 It's a marvelous quote, capturing the... more
Close menu


It's a marvelous quote, capturing the style and image bound up in the Creation. Both in excite-ment and innovation they were an almost perfect group, but somehow circumstances fell in the way of success.

Their roots trace back to 1963 and a Cheshunt group. Jimmy Virgo & The Blue Jacks. They included Jimmy Virgo (vocals), Norman Miffen (lead guitar - an ex-member of Cliff Richard & The Drifters), Mick Thompson (rhythm guitar), John Dalton (bass) and Jack Jones (drums). On Virgo's departure and the arrival of replacement Kenny Lee, they became Kenny Lee & The Mark Four. Miffen left soon after, Eddie Phillips joined as guitarist, Kenny Lee became Kenny Pickett and the group's prefix was dropped so they became simply the Mark Four (no relation to the Liverpool quartet of the same name). The Mark Four were signed to Mercury in early 1964, releasing  Rock Around The Clock' c/w 'Slow Down' as their debut single that May, followed by 'Try It Baby' c/w 'Crazy Country Hop' some months later.

The four sides are all covers: Bill Haley, Larry Williams. Marvin Gaye and Johnny Otis respectively. They are all dependable versions of differing styles. The group's real identity began to show on their third single which appeared on Decca a year later in August 1965.

'Hurt Me If You Will' c/w 'I'm Leavin" is a confident single. beginning the excellent Pickett/Phillips songwriting team. This time the influences are contemporary, 'Hurt Me' is a straightforward and power-ful song. whereas 'I'm Leaving" hints toward the expression of the Who (and later Creation) with its no Diddley form and superb controlled feedback passages. The release was followed by the inevit-able changes. Mick Thompson dropped out of music altogether, as did John Dalton, although his was a short absence.

By the Summer he'd auditioned success-fully for The Kinks, replacing Peter Quaife for 'Sunny Afternoon,' he left upon Peter's return to the group and joined them again in 1969 when Quaife finally left. Dalton's replacement in the Mark Four was Tony (surname sadly forgotten by all), and the group released their final single the fol-lowing February.

'Work All Day (Sleep All Night)' c/w 'Going Down Fast' two more originals following the line towards the future group's direction, with melodies and performances needing a producer to refine them into a complete direction. By this time the group were in London, re-presented by the Robert Stigwood agency. but real progress came with a new manager. Tony Stratton-Smith was already hand-ling the Koobas when a mutual friend persuaded him to see the Mark Four. He was impressed and agreed to handle the group on condition a new bassist was found. He suggested Bob Garner, briefly a Merseybeat and latterly a part of the Tony Sheridan group. Garner was accep-ted and Stratton-Smith's next move was to find a producer. He brought in Shel Tali, who had heard the group previous-ly on an early demo of 'Crazy Count, Hop: Since that time Talmy had become a leading independent record producer. working with, amongst others The Kinks and The Who, although he'd recently found his relationship with the latter severed. Talrny was impressed with the Mark Four, signing them to his own Planet label the next day. Within a week they were recording a single, but under a new name - found by Pickett in a book of Russian poetry - The Creation. 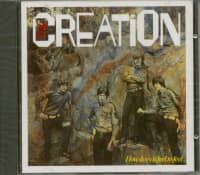 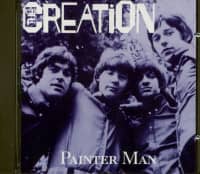