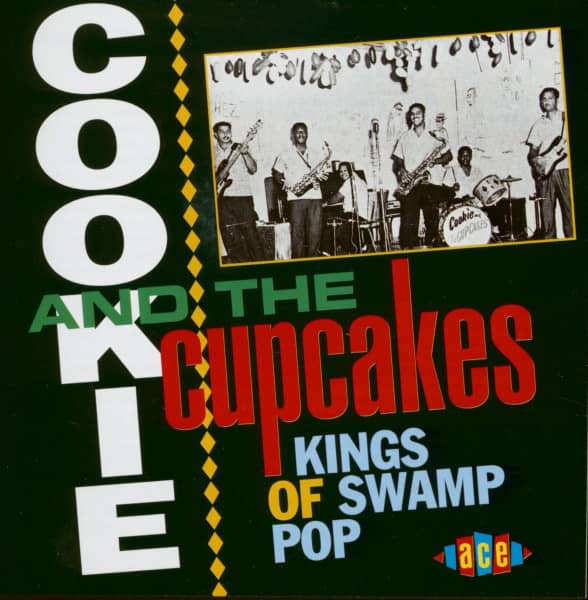 (Ace Records) 30 tracks 1956-64 (79:17) with 12 page booklet.
-
I suspect that during the golden age of swamp pop, which is often said to be from 1958 to 1963, few people in this country had heard of Cookie and the Cupcakes.
I confess ignorance until the 70s when I bought their reissue LPs on the Jin label. Today, any aficionado will immediately quote Mathilda as the Cupcakes' outstanding offering. In his book 'South To Louisiana', John Broven describes it thus: If swamp-pop has a signature tune, an anthem, it has to be the quintessential 'Mathilda'.

Recorded for George Khoury's Lyric label and leased to Judd (owned by Judd Phillips of Memphis), the single climbed to #47 in the Billboard chart in early 1959. Mathilda would surely have gone higher with a bigger company behind it. Cookie's crying vocal was stunning. Billboard was right when it noted that "the cat has a sound and he belts it as tho' from the swamps" The Cupcakes' instrumental backing - baying saxes, tripleting piano, and swirling guitar over a wallowing beat - was just as majestic, while the song itself was memorably melodic.

Even today, everybody accepts that if a local band plays Mathilda and nobody dances, the musicians may just as well pack up and go home. Johnnie Allan speaks of Cookie's great influence on other performers and of how Mathilda was played on all the radio stations, Cajun, country and western, rock'n'roll and R&B. Written around 1956, but not recorded until 1958 after being turned down by Eddie Shuler and Don Robey among others, it's this hit version that closes the CD and should not be confused with the 1962 remake which is also included.

Starting as the Boogie Ramblers and with Huey 'Cookie' Thierry only recently joined, the Cupcakes signed for Eddie Shuler's Goldband label in July 1952 but for some reason the single Cindy Lou /Such As Love, with original member Shelton Dunaway on vocals, was not released until 1955. That historic offering is presented here. Cookie became joint leader with Shelton, sharing vocals and both playing tenor sax. Other members were Sidney 'Hot Rod' Reynaud, tenor sax-.-Marshall LeDee, guitar-.-Ernest Jacobs, piano-.-Joe 'Blue' Landry, bass guitar-.-and Ivory Jackson, drums.

Around 1963 Little Alfred (Babino) joined the band after his success with Walking Down The Aisle which was recorded with the Berry Cups who were modelled on the Cupcakes. A slew of emotional swamp-pop classics appeared between 1959 and 1964, including Until Then, I've Been So Lonely, Even Though, the lively I Cried and the wonderful Belinda. Cover versions also appeared, adapted to the inimitable Cupcakes' style but usually faithful to the original, such as the traditional Betty & Dupree-.-Got You On My Mind, the Big John Greer R.&B hit from 1952-.-Ivory Joe Hunter's I Almost Lost My Mind-.-Jiving Gene's Breaking Up Is Hard To Do-.-Shirley and Lee's Feel So Good-.-Pat Philips' Sea Of Love-.-Joe Turner's Honey Hush-.-Chuck Willis' Charged With Cheating-.-and the Platters' The Great Pretender featuring Carol Fran.

All tracks have been remastered to achieve the best possible sound and this is apparent in comparison with the 1990 Japanese P-Vine CD, the only other release in that format that I am aware of which makes available some of the 30 tracks included here. Shane K Bernard's booklet notes also tell the story of Cookie's disappearance from South Louisiana in the mid-60s (he moved to Los Angeles)-.-of the rumours of his disabilities or even death-.-and of his rediscovery by Cupcakes' pianist Ernest Jacobs in 1992. Disabled he was, but able to walk with the aid of a stick which is how he performed magnificently at the 1995 Blues Estafette in Utrecht, backed by the revived nine-piece Cupcakes who included Shelton Dunaway, Ernest Jacobs, 'Hot Rod' Reynaud, Little Alfred and Marshall LeDee.
It was a memorable gig and this is a memorable CD.