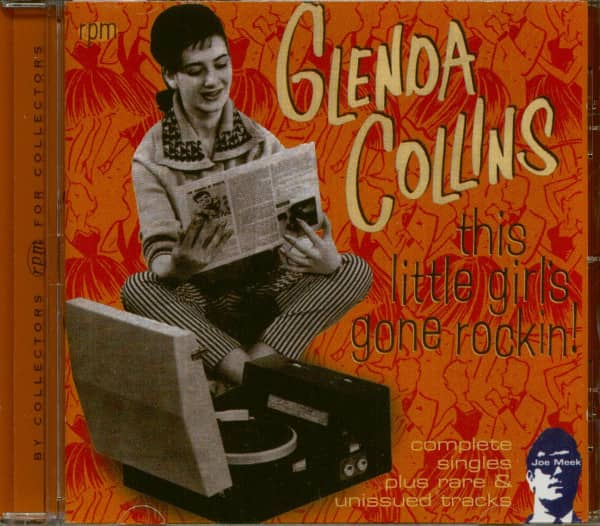 Glenda Collins, born in London in 1945, signed with UK Decca in 1960 as a 15-year-old and although none of the eleven singles she released over the next seven years was actually included in the charts, they have gradually become coveted collectors' items - most of them were produced by legendary indie producer Joe Meek, some of which contained the fiery, wild-cut guitar solos of a young ritchie Blackmore.

Encouraged by her parents (no strangers in the world of showbiz, as they were former amateur ballroom dance champions), she started singing as a 12-year-old and was picked up by Carroll Levis, with whom she made many radio and TV appearances before finally switching to summer shows and cabaret. After extensive professional singing and dancing lessons and with her father Eric Collins as manager she started her career: besides club and cabaret work she also appeared regularly on TV and radio where she appeared on Easy Beat, The Beal Show, Cool For Cats and so on. In line with the improvement in her wealth, it was signed by Decca, for whom she cut three singles under the aegis of Mike Smith - "Take A Chance" (1960), "The Age For Love" and "Find Another Fool" (both 1961). The latter was a big seller and was later recorded on an Ace Of Clubs album'Thank Your Lucky Stars'.

In 1962 Glenda Joe Meek was introduced in his small studio on London's Holloway Road: At that time Meek was the only independent sheet music producer in the UK who had achieved many spectacular successes - including # l's with John Leyton and The Tornados - and had made a name for himself with his atmospheric productions with their unusual sound effects. However, he had not had any success with the girls, a shortcoming that he wanted to remedy: To this end, he signed Glenda.

Between 1963 and 1966 Meek produced eight Glenda Collins singles (which were first rented to HMV and later to PYE) and although he couldn't break his duck in terms of girlie hits, their records belong to his best and most lasting productions. The first,'I Lost My Heart At The Fairground' (supported by The Tornados - The Outlaws auf der (Lippe)), has all the typical features of an RGM production; the exhibition grounds SFX; lots of echo; the pipe organ; the driving beat; the back-up vocals; and a strong melody. It got great reviews and was played on the radio, but unfortunately only just missed. But if she was unlucky, she was even unhappier with the sequel'If You've Got To Pick A Baby' (again supported by The Outlaws, embellished by some typical tasteful chops by Ritchie Blackmore); as a surprise guest on Juke Box July she saw a very enthusiastic Cilia Black who persuaded her fellow jurors to make it a hit - it was almost so.

She was really unlucky not to achieve the elusive breakthrough. Constantly busy, mainly with Cabaret and Summer Seasons, she also worked intensively in Europe, toured with Cliff& The Shadows and Helen Shapiro in'63 through Scandinavia and the following year in Italy; she performed in nulier West End concerts and musicals and worked with such diverse artists as Jim Dale, Millie, Dick Emery, Shirley Bassey, John Leyton and others. she even supported the Beatles on a summer show in Great Yarmouth; and was always on TV, in Thank Your Lucky Stars, Ready Steady Go, Discs A-Go-Go, and maybe more long forgotten regional TV shows. But somehow the big break just never happened; in those days you needed hit records to maintain a career - and she wasn't able to get rid of a single, although she continued to produce excellent CDs - especially'Thou Shah Not Steal backed with Been Invited To A Party', a strong double page (the top side a cover of a US hit by Dick & Dee Dee on both sides, supported by Heinz's Wild Boys, with this man Blackmore once again in a strong acoustic proof.

Joe Meek's hit series was good and really dried out until 1966 - and yet when you play Glenda's two Pye singles (both produced in the last year of his life) it's really hard to understand why. Surely the stylish, soulful beat ballad'Something I've Got To Tell You' looks good - and it was slightly as valid as everything recorded this year by Cilia Black, Petula Clark or Sandie Shaw, each of whom regularly achieved great hits. And'It's Hard To Believe It' really is something else again; a long-time highly regarded prize among RGM collectors that includes just about everything Meek could have thrown in. Strangely, at the time of its publication, its lyrical content triggered a slight controversy somewhere between a protest disc and a social commentary. Pye had actually rejected the original recording and instructed Meek to water down the text if he wanted to.

As is well documented elsewhere, Meek took his own life on 3 February 1967 during this unpleasant shotgun incident on 304 Holloway Road. And Glenda Collins never resumed: She lasted a few more years on the cabaret circuit - but without a record deal she couldn't make any further progress. She married and settled and now lives with her husband and family in the West Country.

Due to contractual problems, surprisingly few productions of Joe Meek have been re-released since his death - which makes the release of this album (which includes all eight RGM singles by Glenda) all the more enjoyable. Ritchie Blackmore can be found on about half of the tracks, his sonically similar successor in the Wild Boys Barry Tomlinson on most of the others. In addition to this material, Glenda recorded many more tracks on Holloway Road, including'Sing C'est La Vie' (a charming song), a version of Ruth Brown's'This Little Girl's Gone A-Rocking' and a full album with other Pye artists, the Riot Squad. Realistically, it seems unlikely that these shots will ever see the light of day - but you never know how lucky you are, maybe now that Meek's estate has finally been cleared up, everything can happen. R. W. Dopson & A. D. Blackburn