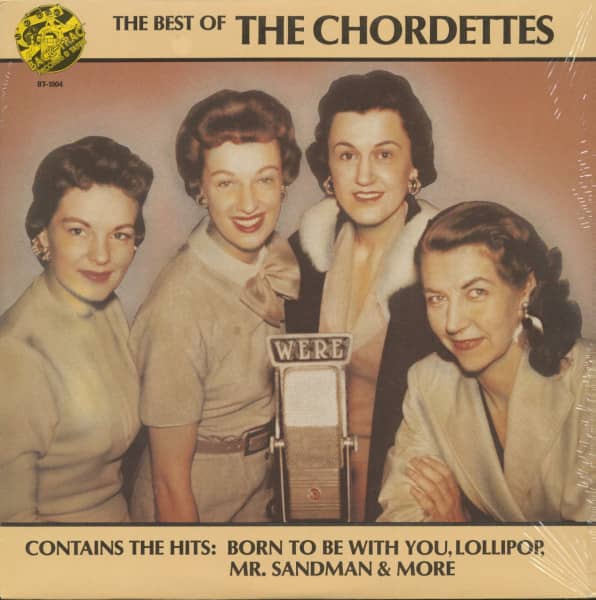 Cadence Records, which was formed in 1952 by Archie ( Bleyer, was known mostly for establishing such artists as Johnny Tillotson, Link Wray, Lenny Welch, The Everly Brothers and Eddie Hodges. But before they made it big in 'rock & roll' they had a number of hits with such artists as Julius La Rosa, Bill Hayes, Archie Bleyer himself, and most importantly, The Chordettes.

The Chordettes consisted of Janet Ertel, Carol Bushman, Lynn Evans and Margie Needham. Janet Ertel sings 'bass' and was one of the original organizers of the quartet when it began in Sheboygan, Wisconsin. Carol Bushman is the 'baritone' of the group and the only other member from the original four. Lynn Evans is the lead singer of the quartet who replaced one of the girls (Dorothy Schwartz in January, 1953) who was getting married. And last but not least is Margie Needham who sings 'tenor' in the group and who replaced one of the original girls (Jinny Lockard in June, 1953) who also decided to marry.

The singing career of the four original Chordettes began quite innocently one Sunday afternoon in 1946 in Sheboygan, Wisconsin. Just for the fun of it, they decided to try their hand at a few 'male' barbershop quartet arrangements which happened to be lying around the parlor. With a few changed notes here and there, they found that the results were surprisingly good. Let us not forget the general rules for barbershop quartet singing which the Chordettes used to create their unique sound -  1) four part harmony to each song, one person to each part; 2) at no time must there be an instru-mental accompaniment; 3) the melody is always carried by the second voice from the top (or the third voice from the bottom); as well as some lesser, more technical regulations.

Creative work begets more creative work; and, so it happened, the more the group worked together the more they began to further their career. In 1949, the Chordettes took time out from a series of personal appearances to sing on Arthur Godfrey's 'Talent Scouts' program. With no difficulty whatever, they came out as winners. They parlayed this success into appearances on Godfrey's day-time shows and a contract followed making them members of his permanent company for both radio and television work.

Further fame was just around the corner. Following the Godfrey appearances, they were signed to Cadence Records by Archie Bleyer, and their first record, 'Mr. Sandman,' was at number one for seven weeks in 1954, sold more than 1,000,000 records and remained on the charts for twenty weeks. In 1958, The Chordettes recorded one of the pop music classics of the late 1950's, 'Lollipop.'This record peaked at the number two position and was a hit in England and Europe as well. Also on the charts in 1958 was a Cadence LP titled 'The Chordettes' (Cadence CLP 3001). Their other top twenty singles were: 'Eddie My Love' (1956); 'Born To Be With You' (1956); 'Just Between You and Me' (1957); 'Zorro' (1958); and 'Never On Sunday' (1961). The Chordettes were able to come back time and time again with new records that would keep their fans humming and the turntables spinning.

This album is a recorded documentary in song of the very best of The Chordettes. Here, of course, are their top ten songs, 'Mr. Sandman,' 'Lollipop,' and 'Born To Be With You' as well as the other songs popularized by the group. They are presented here as they were originally released with all the bounce, zest and lively harmonizing that make the Chordettes one of the most famous and renowned groups in musical history.

Review 0
Read, write and discuss reviews... more
Close menu
Customer evaluation for "The Best Of The The Chordettes (LP)"
Write an evaluation
Evaluations will be activated after verification.
Weitere Artikel von The Chordettes
The Chordettes: Born To Be With You Art-Nr.: CDCHK836